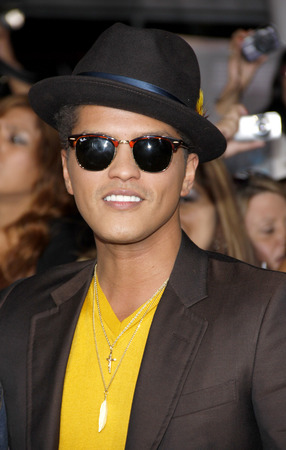 Bruno Mars at the LA premiere of ‘The Twilight Saga: Breaking Dawn Part 1’ held at the Nokia Theatre, November 14, 2011.

On November 20th, both Peter Gene Hernandez, the American singer-songwriter-producer who goes by the professional name Bruno Mars, and New York City-based Warner Music Inc. were named as defendants in a copyright case filed in the Southern District of New York by Burbank, CA-based photographer Catherine McGann. The lawsuit targets Mars’ social media use of a photograph of himself taken by McGann when Mars was performing as an Elvis impersonator as a child.

Plaintiff McGann alleges that on June 21st, Mars copied the child photograph of himself and posted it to a series of social media websites including Facebook, Instagram and Twitter. An exhibit attached to McGann’s complaint depicts a screenshot of the Bruno Mars Facebook page including the posted photo which had garnered more than 235,000 ‘likes.’ McGann alleged that the Instagram post received more than 1.2 million likes and the Twitter post received 63,000 likes and nearly 15,000 retweets.

McGann argues that Mars and Warner Music, who helps Mars maintain the social media websites, used the photograph of Mars without any license or permission from McGann to do so. The complaint indicates that McGann registered the photo with the U.S. Copyright Office under the registration number VA 2-067-037. McGann’s complaint includes a single count for federal copyright infringement and seeks actual damages, defendant’s profits and prejudgment interest.

Even where a photo contains an image of a well-known celebrity, the owner of the copyright to that photo is the photographer’s and not the celebrity subject as is noted by this March 2016 blog post by AMD Law Group. Plaintiffs suing for copyright infringement may be able to recover statutory damages of up to $30,000, although actual damages are being sought instead in the Bruno Mars case. Interestingly, it may be possible for social media posts containing original material to be themselves copyrighted although the shorter form of the content requires a higher degree of originality to obtain copyright protection.

This is not the first copyright infringement suit filed in U.S. district court in which Bruno Mars has been listed as a defendant according to data collected by legal data analytics firm Lex Machina. In January 2014, Mars and rapper Travie McCoy were targeted in a copyright suit filed by mixtape producer Demetrius Proctor who alleged that the song “Billionaire” sampled music from a mixtape he produced.