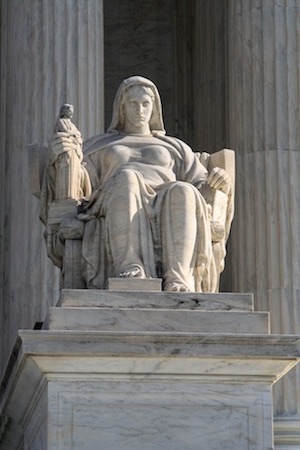 Justice Gorsuch seems the most likely, based on his questions, to support the petitioner’s position that there is a constitutional infirmity surrounding IPR proceedings. Chief Justice Roberts also seemed to have substantial concerns with respect to IPR proceedings. Perhaps somewhat predictably, Justice Breyer and to a lesser extent Justices Sotomayor and Kagan, seemed through their questions to view IPR proceedings as just another opportunity for the Patent Office to make sure the correct determination has been reached at the time the patent was granted by the Patent Office. Justice Kennedy overall seemed more in line with the thinking of the liberals on the Court, Justice Ginsberg asked difficult questions and seemed difficult to predict how she might rule. Justice Thomas characteristically remained silent, although his judicial philosophy would be typically in line with Justice Gorsuch. Justice Alito asked only a few questions of the petitioner’s counsel, Allyson Ho, which focused on whether the Constitution requires a Patent Act and whether Congress could put limitations on the grant of “these monopolies.”

It seems accurate to recognize that each of those before the Supreme Court today fielded difficult questions from a hot Court. There were themes that emerged throughout the questioning. And one peculiar aspect of the day seemed to be that the Department of Justice continues to take patent positions that are perfectly simpatico with Obama era policies. I suppose the lesson of the day is this: Not much has changed relative to patent policy under President Trump despite the great hopes of many in the patent owner community.

Questions for Ms. Ho, representing Oil States, tended to focus on the differences between reexamination and inter partes review, with Ms. Ho explaining that reexamination is “fundamentally examinational,” in contrast to IPR proceedings, which are adjudicatory and the type of “cases that have been adjudicated in courts for centuries…”

Questions for Christopher Kise, representing the respondent Greene’s Energy Group, tended to focus on three different aspects: (1) What if a patent owner has spend millions or billions of dollars in reliance on the patent over a period of many years, do rights ever vest? (2) Whether there is an opportunity to review the agency determination in an Article III tribunal. (3) Whether patents are a private right.

With respect to the first issue, which continued to come up over and over again once raised by Justice Breyer, it seemed to trouble the Court that there is no period of time in which a patent vests and patent owners can meaningfully rely on the patent having vested. Although Justice Breyer raised the question, which was picked up on by Chief Justice Roberts and Justice Gorsuch, Breyer would later say show his contempt for a vested rights theory, saying that such a theory was popular in the 19th century, and held sway with Justice Story in earlier cases, “but in fact has happily sunk from sight.” Still, Roberts and Gorsuch seemed concerned with the issue of vested rights.

Questions reserved for Malcolm Stewart, who argued on behalf of the federal government, tended to focus on the difference between patents and land, the extent to which the Patent Office could constitutionally be involved in deciding infringement issues, and the impact on panel stacking at the Patent Trial and Appeal Board in order to achieve the result desired by the Director in a particular case.

With respect to the Patent Office deciding infringement issues, Stewart seemed to paint himself into a bit of a corner when he distinguished an executive tribunal such as the PTAB deciding infringement issues because there is no precedent in common law or elsewhere to support damages being awarded by an agency in a dispute between parties. This led Justices Sotomayor and Gorsuch to ask whether it would be constitutional for the Patent Office, or the Director specifically, to render decisions in patent infringement matters if no damages were sought.

Following up on Justice Sotomayor’s question, Gorsuch to ask: “So a declaration of non-infringement could be issued by the director, for example, right?” Stewart explained that would be harder to defend because making such decisions is “not part of the PTO’s traditional work.” This caused Gorsuch to question how long does it take to make a tradition. This was in reference to Kise and Stewart arguing that for the past 40 years reexamination has been a procedure offered by the PTO, while Ms. Ho had argued that for 400 years courts have been responsible for adjudicating patents.

In rebuttal Ms. Ho picked up on the line of questioning relating to panel stacking as being problematic, which was a recurring theme during the oral arguments: “[T]he existence of panel stacking shows precisely the danger of judges, of decision-makers, who are subject to executive political influence.”

It seemed that no one serious defended the practice of panel stacking, although it was minimized as not having happened very much. This lead Justice Kennedy to ask Mr. Kise to assume panel stacking were rampant as he answered the Chief Justice’s concerns. Kise would again say that it is not rampant, but “that the Administrative Procedures Act and other provisions of the Constitution would deal with infirmities in a particular case on an as-applied basis…”

One moment of humor did arise when Chief Justice Roberts was asking Mr. Stewart about PTAB panel stacking.

MR. STEWART:… My understanding of the cases is that the chief judge was concerned that the initial -­

MR. STEWART: The chief judge of the PTAB.

MR. STEWART: An executive branch official. The chief judge of the PTAB -­

CHIEF JUSTICE ROBERTS: When we say “judge,” we usually mean something else.

Whatever the ultimate outcome of the case is, one thing seems certain. The thoughts of Neal Solomon in his series were eerily on point. Solomon wrote an 8-part series on the constitutionality of the PTAB under the public rights doctrine, which was absolutely front and center throughout the questioning. Solomon predicted cases like Crowell, Northern Pipeline, Schor and Stern would all be relevant to the Court’s determination, and each of those cases were raised in questioning by the Justices.

There will undoubtedly be more to write in the coming days and weeks. Stay tuned.