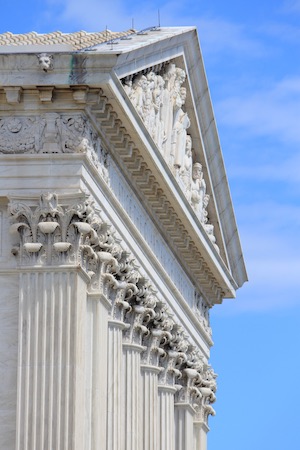 On November 21, 2017, amici Network-1 Technologies, Inc. (“Network-1”), Mirror Worlds Technologies, LLC (“MW”), Broadband iTV, Inc. (“BBiTV”), Island Intellectual Property, LLC (“IslandIP”), Double Rock Corporation (“Double Rock”), and Access Control Advantage, Inc. (“ACA”) (collectively “Amici Curiae”) filed an brief in support of RPost’s petition for a writ of certiorari in RPost Communs. Ltd. v. GoDady.com, LLC.  The extra-statutory use of challenges to patent-eligibility under 35 U.S.C. §101 is causing harm to patent owners, inventors, and the marketplace.  Thus, Amici Curiae each believe it is important for the Court to clarify the availability under 35 U.S.C. § 282 (b)(2) and (3) to raise patent eligibility challenges under 35 U.S.C. § 101 in district courts.  Charles R. Macedo, and David Goldberg of Amster, Rothstein & Ebenstein LLP along with Marc Fenster, Brian Ledahl and Benjamin Wang of Russ, August & Kabat were authors on the brief.

The following is an excerpt taken from amicus curiae’s brief.

Section 101 of the Patent Act was codified as part of the 1952 Patent Act.  At the same time, Congress set forth in Section 282(b) a list of available defenses that may be asserted in a patent infringement action brought in court.  While Congress has tinkered with Section 282 a number of time since its enactment in 1952, including identifying other invalidity defenses, such as failure to comply with some portions of Section 112 (see 35 U.S.C. § 282(b)(3)), Congress has never added “Inventions Patentable” (35 U.S.C. § 101) as an available enumerated defense. Amicus Curiae respectfully submit that the Petition for Writ of Certiorari should be granted in this case to address this important issue.

In Section 282(b), Congress specified the “[d]efenses in any action involving the validity or infringement of a patent” as including four categories of specifically enumerated defenses.  The relevant paragraphs of Section 282(b) read as follows:[1]

(2) Invalidity of the patent or any claim in suit on any ground specified in part II as a condition for patentability.

(A) any requirement of section 112, except that the failure to disclose the best mode shall not be a basis on which any claim of a patent may be canceled or held invalid or otherwise unenforceable; or

The only “conditions of patentability” specified in part II of the Patent Act are:

The fact that the “conditions of patentability” do not include all the sections of the patent act set forth in Part II (i.e., 35 U.S.C. §§ 100–212) is reinforced by the separate delineation in Section 282(b)(3)(A) and (B) of some portions of Section 112 and “any requirement of section 251.”  A contrary reading of the statute would render the “conditions of patentability” language in Section 282(b)(1) meaningless.  Cf. Bilski v. Kappos, 561 U.S. 593, 607–08 (2010) (applying canon against interpreting provision in a manner that would render another provision superfluous, even when Congress enacted the provisions at different times).

While the titles of these sections make it easy to see the distinction between a “condition” and “requirement,” the language of each provision draws these distinctions as well.

For example, Section 102, begins “A person shall be entitled to a patent unless . . . ” certain conditions are met.  Similarly, Section 103 provides when “[a] patent for a claimed invention may not be obtained . . . .”  Each of these provisions, as the titles suggest, specifies “conditions for patentability.”

By contrast, Section 101 positively recites when someone “may obtain a patent . . . subject to the conditions and requirements of this title.”  Likewise, Section 112 lists a series of “requirements” for a patent “specification” with positive language setting out what the specification “shall contain,” “shall conclude with,” or “may be expressed as.”

Thus, the plain terms of the statute do not extend Sections 282(b)(2) and (3) to include challenges to patent-eligibility under Section 101.  Because the plain terms of the statute are unambiguous, no further statutory analysis is necessary.  See, e.g., Kaiser Aluminum & Chem. Corp. v. Bonjorno, 494 U.S. 827, 835 (1990) (“The starting point for interpretation of a statute ‘is the language of the statute itself.  Absent a clearly expressed legislative intention to the contrary, that language must ordinarily be regarded as conclusive.’”).

[1] Unless otherwise indicated, all emphasis is added.