Give Thanks for Oil States 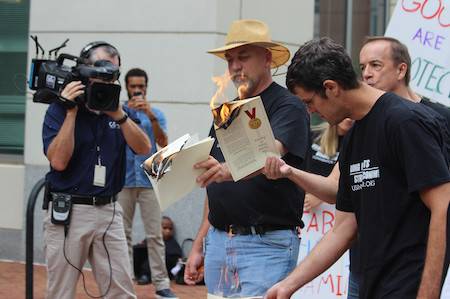 US Inventor sponsored a protest at the USPTO where inventors burned patents in August. Pictured are Paul Morinville (hat), Josh Malone (glasses) and Randy Landreneau. Photo by Julie Pixler.

As we spend time with family and friends during this Thanksgiving season, we certainly have a lot to be thankful for. Were it not for a small group of individuals with an unfathomable amount of foresight and courage a few hundred years ago, where would we be? Of course, that foresight included the creation of the American Patent System, itself revolutionary and an inseparable part of the DNA of this great experiment called America.

Just as perfect statues erode from the rain, so can ideals when faced with the constant pressures of an imperfect world. If you are one of the many inventors who have lost their duly issued patents in a Patent Trial and Appeal Board (PTAB) action, you understand. As bad as the situation is, we are lucky to be in America, right now, at a time when the collective voice of the people can be heard and can make a difference.

If you doubt this, consider that a grassroots effort stopped The Innovation Act (H.R.9) from being passed the second time it was brought to the U.S. House. It had previously passed 325-91. I am told by people smarter than me that there is no historical precedent for a bill, having passed this resoundingly, being stopped the second time.

The greatest cause of our time is the correction of the American Patent System – the return to a system that provides an actual intellectual property right, signified by a U.S. Patent, to any inventor regardless of income status. This was the revolutionary aspect of our patent system when it was created. The aristocracy of other countries scoffed at it, until they saw the effect of empowering the common man to innovate. It quickly became obvious that America was right. But changes in recent years have turned intellectual property here into a “game of kings” that is the opposite of what made America the worldwide leader in innovation.

Among the attacks in recent years on the intellectual property rights of inventors was the passage of the America Invents Act (AIA) of 2011, which created the PTAB – the current tool of choice for invalidating patents. If your patent makes it to the PTAB, there is greater than a 90% chance that it will either be invalidated or neutered.

The US Supreme Court will look at these issues when it deliberates Oil States Energy Services, LLC v. Greene’s Energy Group, LLC, starting Monday morning, November 27th. US Inventor, the premier non-profit fighting for inventors’ rights, will be staging a demonstration to bring attention to the issue. You have the unique opportunity to come and be a part of history as we make our voices heard in the most important cause of our time.

The erosion of patent rights that we have experienced in recent years must be stopped now. Inventors nationwide need your help.  America needs your help. Come and be a part of this historic demonstration – see this link for more information on the US Inventor protest of the PTAB on November 27th..