The Constitutional Underpinnings of Patent Law 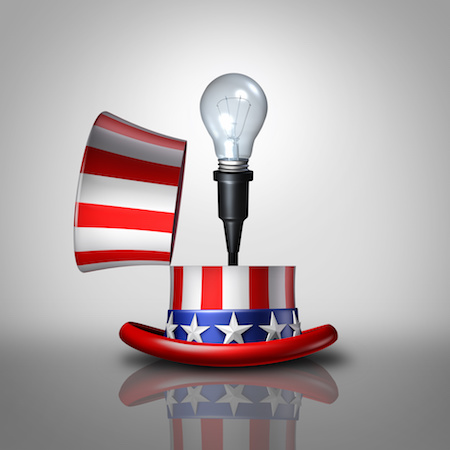 The United States Constitution grants to the Congress the power to grant patents. The relevant portion of the Constitution, Article I, Section 8, clause 8 reads:

“The Congress shall have Power To…promote the Progress of Science and useful Arts, by securing for limited Times to Authors and Inventors the exclusive Right to their respective Writings and Discoveries….”

Of particular note is the use of the word “Right” in this clause. This is the only place in the Constitution the Founding Fathers actually used the word “Right.” Yet today the Supreme Court is poised to determine whether this most fundamental of all rights, a right deemed so important that it was the only right specifically mentioned in the Constitution itself, is a private right or a public right that can be stripped with proceeding in an Article III federal court. Previously, the Supreme Court has said only a federal court can take a patent away because it is a property right, but that case was over 100 years ago. We will soon learn whether the “exclusive Right” mentioned in the Constitution does, in fact, remain a property right or something more akin to a fishing or hunting license that can be revoked by a government agency.

In any event, this power residing in the Congress found in Article I, Section 8, Clause 8, is unlike most of the enumerated powers granted to Congress in the Constitution. This clause, known to patent attorneys at the Patent Clause and known to others in the intellectual property community as the Intellectual Property Clause, is a qualified grant of power, which does limit Congressional discretion in at least some ways. For example, the Congress does not have free reign to decide that patents should be easily or freely given, but rather must limit their exercise of power to the dictates of the clause itself.   See Bonito Boats, Inc. v. Thunder Craft Boats, Inc., 489 U.S. 141, 146 (1989).  See also Graham v. John Deere Co. of Kansas City, 383 U.S. 1, 5 (1966) (“The clause is both a grant of power and a limitation. This qualified authority, unlike the power often exercised in the sixteenth and seventeenth centuries by the English Crown, is limited to the promotion of advances in the ‘useful arts.’”).

In this regard, Congress may not simply create patent terms of unlimited duration, and it is unlikely that Congress could do away with the novelty and non-obviousness requirements.  It is perhaps even more unlikely that Congress could authorize the issuance of a patent when the ramifications of such issuance would be to remove an existing invention from the public domain.  See Graham, 383 U.S. at 6 (Congress may not “enlarge the patent monopoly without regard to the innovation, advancement or social benefit gained thereby.”).  See also Great A. & P Tea Co. v. Supermarket Equipment Corp., 340 U.S. 147, 154-55 (Douglas, J. concurring) (“It is not enough that an article is new and useful.  Rather, the Constitution permits Congress to award an inventor a patent if and only if an “invention” does indeed exist.  The Constitution never sanctioned the patenting of gadgets. Patents serve a higher end–the advancement of science. An invention need not be as startling as an atomic bomb to be patentable. But is has to be of such quality and distinction that masters of the scientific field in which it falls will recognize it as an advance.”).

In determining whether an invention worthy of patent protection does exist, the Constitution requires the invention proffered by the applicant to be new, useful and the embodiment of a scientific advance.  See Hotchkiss v. Greenwood, 52 U.S. 248, 267 (1851) which states: “[U]nless more ingenuity and skill . . . were required . . . than were possessed by an ordinary mechanic acquainted with the business, there was an absence of that degree of skill and ingenuity which constitute essential elements of every invention. In other words, the improvement is the work of the skillful mechanic, not that of the inventor.”  See also Atlantic Works v. Brady, 107 U.S. 192, 200 (1883) which states: “It was never the object of those laws to grant a monopoly for every trifling device, every shadow of a shade of an idea, which would naturally and spontaneously occur to any skilled mechanic or operator in the ordinary progress of manufactures. Such an indiscriminate creation of exclusive privileges tends rather to obstruct than to stimulate invention.”

The “flash of genius” requirement was specifically rejected by Congress with the enactment of 35 U.S.C. § 103(a), which in relevant part states: “Patentability shall not be negatived by the manner in which the invention was made.”  35 U.S.C. § 103(a). Congress may statutorily make this change because they are not doing away with the obviousness requirement, but rather, codifying the meaning of the Constitutional obviousness requirement, which is certainly within the scope of their authority pursuant to the Patent Clause.

The constitutional reward of a patent, together with the constitutional requirements of utility, novelty and non-obviousness, represent a delicate balance struck between the need to encourage innovation and the avoidance of exclusive rights that stifle competition without any concomitant advantage to society. See Bonito Boats, Inc. v. Thunder Craft Boats, Inc., 489 U.S. at 146.  In implementing the permissive constitutional authority, Congress is free to place requirements upon the acquisition of a patent that further the goals of the clause, while at the same time not compromising the specific dictates of the grant of power.  This is true because Congress may only enact laws pursuant to one of its enumerated constitutional powers.  See United States v. Morrison, 529 U.S. 598, 607 (2000) (“”Every law enacted by Congress must be based on one or more of its powers enumerated in the Constitution.”); Marbury v. Madison, 5 U.S. 137 (1803).  Cf. Railway Labor Executives’ Ass’n v. Gibbons, 455 U.S. 457, 468-69 (1982) (a determination that Congress had the power to enact nonuniform bankruptcy laws pursuant to the Commerce Clause would eradicate from the Constitution a clear and present limitation on the power of Congress to enact bankruptcy laws).

In so fashioning the patent laws to enhance the quid pro quo envisioned by the Founding Fathers (i.e., exclusive rights in exchange for disclosure) Congress has enacted certain description requirements that certainly further the goals of the Patent Clause, but which are not constitutional requirements in and of themselves. This is true because while an adequate description is required, the Patent Clause itself does not discuss the particular requirements of the adequate description. For this reason, the metes and bounds of the final requirement for patentability, namely that the patented invention be adequately described, is within the province of Congress to determine.

It is worth noting that so many of those who challenge the Patent Act and rail against the patentability of things such as software and genes fundamentally do not understand patent law.  The argument that patents are unconstitutional is simply ridiculous and easy to debunk with even the most basic understanding of U.S. history. Nevertheless that argument that patents violate some fundamental tenant of U.S. law continues to have at least some traction in some circles.  More insidious, however, is the fact that many in the popular-press and many average citizens mistakenly collapse the entirety of the patent inquiry into the first, threshold question relating to patent eligible subject matter.  The fact that something is patentable subject matter, or in patent speak “patentable,” does not mean that a patent must, should or even could issue.

There are at least five separate requirements for an invention to warrant issuance of a patent.  In order for a patent to be issued that which is claimed must be patentable subject matter, it must be useful, it must also be novel and non-obvious, and the innovation must be adequately described to satisfy the sometimes peculiar U.S. disclosure requirements.  So the fact that the law says that a class of invention is “patentable” or patent eligible merely means the initial threshold has been satisfied and if the invention as articulated is useful, new, non-obvious and adequately described then a patent should issue.  To collapse the entirety of the patent inquiry into a single inquiry, as the Supreme Court did to a very large extent in Mayo v. Prometheus, makes for sensational headlines, allows for enraging 60 Minutes segments and is simple enough even for the masses to understand. Such an understanding of a single question patentability inquiry ignores the Patent Act and at least two centuries of cases, includes scores of decisions from the Supreme Court.

Indeed, Mayo directly contradicts and categorically overrules Diamond v. Diehr. There is just no way that the Supreme Court’s pronouncement of the new legal standard in Mayo does anything other than overrule Section III of Diehr, which explicitly says that the question of novelty plays no role in the determination of patent eligibility.

Failure to understand the intricacies of the Patent Clause of the U.S. Constitution and the many Supreme Court cases that have interpreted that clause allows some rather naive and wholly incorrect understandings to percolate, including among those on the Supreme Court.  Those who refuse to allow facts to influence their otherwise predetermined opinion are the enemies of innovation and why so much energy is spent fighting needless battles rather than focusing on society embracing advances in innovation and allowing risk taking businesses and individuals to have certainty of rights — settled ownership rights — that justify the massive investments necessary to build companies, grow industries and organically create jobs.