BRI and how it increases an obviousness determination

Owens Corning v. Fast Felt (Fed. Cir. 2017) illustrates an example of how the broadest reasonable interpretation (BRI) standard increases the chances that an obviousness argument could:

In Owens Corning, the petitioner was successful in invalidating a patent claim during an Inter Partes Review (IPR) before the Patent Trademark and Appeal Board (“Board”).  Fast Felt (patent owner) owned U.S. Pat. No. 8,137,757 which described and claimed methods for printing nail tabs or reinforcement strips with a lamination roll on roofing or building cover material.  The specification explained that the nail tabs reinforced specific locations on roofing or building cover material where nails would be driven through to attach it to a wood roof deck or a building wall stud wall. 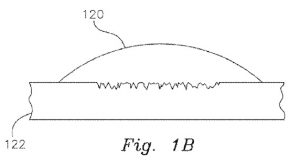 Owens Corning attacked the validity of the ‘757 Patent by saying it was an obvious variation of U.S. Pat. No. 6,451,409 (Lassiter).  Lasiter taught a process using nozzles to deposit polymer nail tabs on roofing and building materials.  But instead of using nozzles as in Lassiter, the nail tabs as recited in Claim 1 of the ‘757 Patent were applied with a lamination roll.  Owens Corning also referenced several secondary references disclosing the use of a lamination roll or printing process and argued it was obvious to use the lamination rolls or printing processes instead of the nozzles and thus arrive at the claimed method steps.  The secondary references were U.S. Pat. No. 5,101,759 (Hefele) and U.S. Pat. No. 6,875,710 (Eaton).

The primary legal issue was whether it would be obvious to replace the nozzle disclosed in the Lasiter reference with the lamination roll / printing process taught in the secondary references to arrive at the claimed invention.

Under the broadest reasonable interpretation, roofing or building cover material would be broad enough to encompass cover material with or without asphalt.  The Board had thus erred because it limited the meaning of the disputed claim terms by requiring a cover material using asphalt.

With the broadest reasonable interpretation of the claim language in mind, the Federal Circuit analyzed the obviousness of the proposed combination of prior art references.  Lassiter specifically taught that its process of applying nail tabs with a nozzle was applicable to building cover materials such as “covering sheets” and “Styrofoam board sheathing.” Moreover, the court found that: “Lasiter itself, by its terms, suggests that a person that a person of ordinary skill in the art would be motivated to print nail tabs on building cover materials that are not and will not be asphalt coated.”

The Owens Corning case illustrates how broadening a claimed invention’s field of use could be detrimental to the claim’s validity and make it harder to overcome an obviousness rejection.  A way to mitigate invalidity attacks under these circumstances would be to consider adding an additional claim focusing on each of the more narrower fields of invention.  For example, claim 1 could have been presented twice with a slight distinction between the two.  A first time for roofing cover material only, and a second time for building cover material only.  In this way, the litigation could have separated the scope of the claims and isolated any invalidity issues related to building cover material to its own independent claim so that the roofing cover material claim might have survived the invalidity attack and left the patent owner with some patent protection.