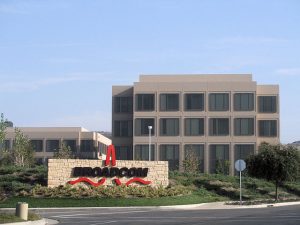 “Corporate Headquarters of Broadcom” by Coolcaeser. Licensed under CC BY-SA 3.0.

On Monday, November 6th, Singapore-based semiconductor designer Broadcom (NASDAQ:AVGO) announced that it had offered a proposal to acquire San Diego, CA-based semiconductor rival Qualcomm (NASDAQ:QCOM). Qualcomm released a press release to confirm that they did, in fact, receive a non-binding, unsolicited proposal.   The deal values Qualcomm at about $130 billion and Broadcom would pay $70 per share; stockholders would receive $60 in cash and $10 in Broadcom shares in the deal. That $70 per share price was higher than Qualcomm’s per share price on November 6th, when it popped above $65 per share early in the day before declining towards $62 by midday trading.

According to Broadcom’s press release on the news, its proposal represents a 28 percent premium over the closing price of Qualcomm stock on Thursday, November 2nd. “”Broadcom’s proposal is compelling for stockholders and stakeholders in both companies. Our proposal provides Qualcomm stockholders with a substantial and immediate premium in cash for their shares, as well as the opportunity to participate in the upside potential of the combined company,” Hock Tan, president and CEO of Broadcom, is quoted in the press release. “With greater scale and broader product diversification, the combined company will be positioned to deliver more advanced semiconductor solutions for our global customers and drive enhanced stockholder value.”

Broadcom’s proposed $130 billion takeover of Qualcomm is reported to potentially be the largest tech firm acquisition ever. The deal also takes into account Qualcomm’s pending acquisition of Dutch semiconductor company NXP (NASDAQ:NXPI), a deal which Qualcomm announced last October. Qualcomm’s bid, which values NXP at $110 per share for a total acquisition price of $47 billion, is priced into Broadcom’s bid regardless if the NXP deal is consummated or terminated.

Rumors that Broadcom was exploring a potential $100 billion-plus bid for Qualcomm were first reported in early November. Bloomberg reported that the rumors helped Qualcomm see a 19 percent increase in share price in intraday trading the day after those rumors were reported, Qualcomm’s largest single day increase in share price by percentage going back to October 2008. Broadcom’s offer to buy Qualcomm comes close off the heels of a visit by Broadcom CEO Tan at the White House to meet with President Donald Trump. During that visit, Tan publicly supported President Trump’s tax reform package while also announcing that Broadcom would be relocating its headquarters from Singapore to the United States. According to news reports, Broadcom will likely be bringing its headquarters to the state of Delaware.

“If Broadcom were to buy Qualcomm I’d expect Qualcomm to reduce spending on patent reform,” said one lobbyist reached for comment but who spoke on condition of anonymity. “I also wonder how this potential acquisition fits into the consolidation of the chip industry and the U.S. government possibly blocking foreign deals involving sensitive patents in the semiconductor industry, particularly relating to artificial intelligence. But there is no doubt, this deal would certainly move Broadcom into the U.S. market in a very big way.”

Broadcom’s offer to buy Qualcomm comes during a period in which the American semiconductor firm has been locked in a major legal battle with consumer tech giant Apple (NASDAQ:AAPL) over patent licensing activities in multiple jurisdictions. This January, both Apple and the Federal Trade Commission (FTC) filed lawsuits against Qualcomm over allegations that its licensing practices operate in violation of the firm’s fair, reasonable and non-discriminatory (FRAND) obligations for its standard-essential patents (SEPs). In April, Qualcomm filed suit in the Southern District of California against Apple, alleging tortious interference and unfair business practices which have wrongfully induced fines against Qualcomm from foreign fair trade regulators. One such fine levied by South Korea’s fair trade regulator was recently upheld, leaving Qualcomm on the hook for $912 million over its licensing and chip sales activities; Qualcomm’s tortious interference lawsuit claims that this fine was based on the performance of Apple phones using Intel chips and that Apple had misrepresented this information to regulators. This July, Qualcomm filed a Section 337 patent infringement complaint against Apple with the U.S. International Trade Commission (ITC) and asserted six non-SEPs to push back on Apple’s contentions of FRAND violations. The ITC decided to institute the Section 337 investigation this August after fellow California-based tech giant Intel (NASDAQ:INTC) filed a public interest statement with the ITC alleging that Qualcomm’s licensing activities constituted “anticompetitive conduct.” Most recently, Qualcomm filed suit against Apple in China this October, again asserting a series of non-SEPs to seek a ban of iPhone sales in that nation.

“We would not make this offer if we were not confident that our common global customers would embrace the proposed combination,” Broadcom CEO Tan is quoted as saying in the news release on the Qualcomm bid. These common global customers include Apple. In March 2016, Broadcom signed a three-year supply deal with Apple for the provision of radio frequency components and modules for use in Apple iPhones. An analyst note on Broadcom issued this August raised the 12-month price target on Broadcom shares by $13 per share in part because of increasing sales of Broadcom components to Apple for the iPhone 8.

Broadcom notes that there are a series of strategic and financial benefits which could result from a Qualcomm acquisition. These include the creation of a leading diversified communications semiconductor company thanks to highly complementary business portfolios; accelerated innovation resulting from enhanced scale and financial flexibility; and compelling financial benefits including $51 billion in combined 2017 fiscal revenues. Broadcom has been provided with a commitment letter from Silver Lake Partners for $5 billion in debt financing and the company has received advice from Citi, JP Morgan, Deutsche Bank and others that debt financing for the proposed Qualcomm merger will be available.

According to the Qualcomm press release, “Qualcomm’s Board of Directors and management have continued to execute on its strategy to position the company for the next phase of profitable growth by making focused investments to extend its leadership in mobile into new opportunities, while maintaining financial discipline and a robust capital return program. Qualcomm has significant opportunities to drive substantial additional value for its shareholders as its technology and product roadmap move into new industries.  The Qualcomm Board of Directors, in consultation with its financial and legal advisors, plans to assess the proposal in order to pursue the course of action that is in the best interests of Qualcomm shareholders.”

Qualcomm stated that they will have no further comment until its Board of Directors has completed its review.

This article was updated on November 6, 2017 at 6:38 PM with the addition of the information contained in the Qualcomm Press release.