For A Trial Court Peering Through The Looking Glass, Everything Appears Abstract 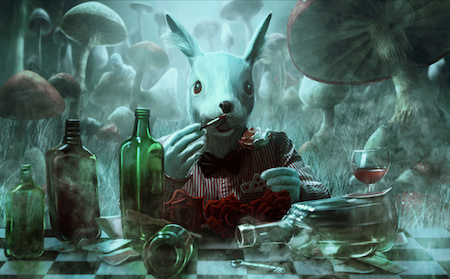 The White Rabbit from Alice in Wonderland.

Who doesn’t remember the warning in Alice about applying the “abstractness” exclusion of Section 101? “[T]read carefully in construing this exclusionary principle lest it swallow all of patent law.” (Id. at 2354).

Many district courts apparently failed to read that part of the Court’s decision.  Instead, they have interpreted Alice as authorizing invalidation of issued patents as “abstract” based solely on the pleadings.  They have done so even where the invalidation rests on resolution of a disputed issue of fact or of claim construction or scope.

This practice is swallowing inventors whole.  And, although this over-reading of Alice has been widely criticized, it has often been abetted by the Federal Circuit.

I write today to ask for your support in the effort to turn back the tide that is drowning patents and companies.  Inventors and American innovation across the US are shouldering the results of this ongoing misapplication of Section 101.

These “pleading invalidations” have resulted in the cancellation of hundreds of valuable patents—each one a vested private property right.  They allowed the patent-holder no opportunity for fact-finding, claim-construction briefing, or any other of the protections usually afforded them in litigation on issued patents.

As former Federal Circuit Chief Judge Paul Michel pointed out to the U.S. Congress in testimony this past July and again this past month, this misunderstanding of Mayo and Alice has placed virtually every inventor and patent holder at risk, while dramatically reducing the incentives and capital for innovation throughout the nation.

In short, since Alice, the Federal Circuit has done nothing to clear up the district courts’ confusion, but instead has affirmed pleading invalidations more than 90 percent of the time.

Nothing in Alice, or Mayo for that matter, authorized these “pleadings invalidations.”  Whether you agree with the decisions or not, both Alice and Mayo, were decided on summary judgment.   In Mayo, the Court observed that “at some level all inventions … embody, use, reflect, rest upon, or apply … abstract ideas.” Mayo, 566 U.S. at 71.

If that is the case, where do we draw the line for an innovation “too abstract for patenting”?  Is that line something a generalist trial judge should be empowered to determine?  Even if an invention is built on an abstract idea, “application[s]’ of such concepts ‘to a new and useful end’ … remain eligible for patent protection.” Id. (emphasis added) (quoting Gottschalk v. Benson, 409 U.S. 63, 67 (1972) (emphasis added).  Who is the best suited to make the determination?  It’s difficult to imagine that should be the generalist judge. Why not one of skill in the art?  Why not an expert in the field?  At the very least, this question is replete with underlying factual determinations that are being swept under the rug.

If you or your organization is shouldering the weight of a misapplication of Section 101, or if you can foresee how this trend could affect you in the future, please join our fight.  We are seeking amicus support on the following issues:

Additional information, including Evolutionary Intelligence’s certiorari petition, filed on Monday, October 23, 2017, can be found here:  http://www.businessdenovo.com/?p=346.  Amicus briefs would be due sometime on or after November 22, 2017.