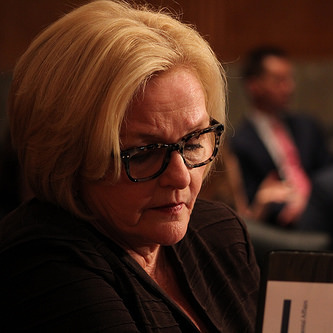 The hastily thrown together bill would only discriminate against Native American Indian Tribes and would allow state universities to continue to assert sovereign immunity pursuant to the PTAB’s January 2017 decision relating to a patent owned by the University of Florida Research Foundation (UFRF). See UFRF’s Win on 11th Amendment at the PTAB.

Why McCaskill would submit a bill that obviously discriminates against Native American Indian Tribes is unclear, although some are speculating that McCaskill, who is up for reelection in 2018, may become the champion of the patent infringer lobby in the coming months. Skeptical observers wonder whether this has to do with fundraising, which McCaskill has been separately Tweeting about recently. McCaskill has reportedly said she will need at least $30 million to mount a reelection campaign, and expects some $200 million to be spent by outside groups.

Meanwhile, McCaskill’s seemingly calculated ploy to get out in front of other Senators, all alone in her demand for a legislative solution that strips Native American Indian Tribes of sovereign immunity, may backfire. The Saint Regis Mohawk Tribe, which acquired the Allergan RESTASIS® patents and then granted back to Allergan an exclusive license, issued a scathing statement, saying the Tribe is outraged that the legislation specifically targets Indian tribes while exempting state universities and other sovereign governments. The statement reads:

“The Saint Regis Mohawk Tribe is outraged that U.S. Senator Claire McCaskill (D-MO), has introduced legislation that specifically targets Indian tribes, yet exempts state universities and other sovereign governments engaged in the very same IPR process.  The double standard that is being introduced by the Senator as a solution for a perceived abuse of the IPR proceedings does nothing to solve the underlying problem. The Tribes authority is inherent and has been reaffirmed through treaties and legislation from the earliest days of the country.

It is cruelly ironic that Indian Tribes, with the highest unmet health care needs in the entire country, are being attacked for exercising their sovereign obligation to fill gaps in health coverage caused by the federal government’s abject failure to uphold its trust responsibility.  The fact that the Mohawk community is home to three unmitigated EPA Superfund sites that harm the health of the community and surrounding non-Native communities is a stark example of the government’s failure.  Congress shouldn’t double down on its mistakes by denying the Tribe’s sovereign authority in the IPR process.

As the largest private employer in Northern New York, the Tribe has a responsibility to ensure the livelihood and well-being of its tribal members and its hundreds of non-Native employees. The Tribe remains committed to working with all Members of Congress to discuss how its recent economic diversification efforts benefits the Tribe, its members, and the surrounding communities without harming competition among pharmaceutical companies (both private and generic) or artificially inflating drug prices.”

Meanwhile, headlines such as Sen. McCaskill unveils unprecedented bill to abrogate tribal sovereign immunity can already be found in Native American news outlets. Tribal governments all across the country are meeting to discuss this attack, which occurred without even a single hearing in the Senate.

Defenders of McCaskill’s here on IPWatchdog.com have already made comments that can only be characterized as racist, which will only cause this ill-conceived and unforced error to blow even further out of control as that backwards mentality spreads.

“Creative avoidance of PTAB will continue to flourish as long as PTAB is permitted to discriminate against patent holders,” Chris Gallagher commented. He is exactly right — that is what this is all about. Instead of discriminating against Native American Indians and stripping Tribes of sovereign immunity Senator McCaskill ought to look at the root problem, which is a PTAB that discriminates against patent owners and operates like a Kangaroo court. See Transgressions of the PTAB.