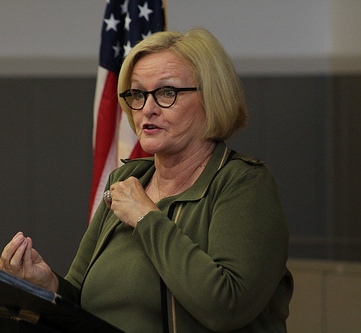 Senator McCaskill (D-MO) has introduced a bill to abrogate the sovereign immunity of Indian tribes as a defense in inter partes review (IPR) proceedings at the United States Patent and Trademark Office. Indeed, the sole purpose of McCaskill’s short, ill-conceived and hastily assembled bill is to make it impossible for Native American Indian Tribes that own patents to assert sovereign immunity when those patents are challenged in proceedings at the Patent Trial and Appeal Board.

“Congress never imagined tribes would allow themselves to be used by pharmaceutical companies to avoid challenges to patents,” McCaskill said in a statement to Reuters. “And this bill will shut the practice down before others follow suit.”

McCaskill is talking about the Allergan deal with the Saint Regis Mohawk Tribe. Allergan transferred the RESTASIS® patents to the Tribe, with the Tribe granting back to Allergan an exclusive license. The purpose of this transaction was so that the Tribe could assert sovereign immunity and defeat the jurisdiction of the Patent Trial and Appeal Board (PTAB) of the United States Patent and Trademark Office. See also here and here.

While McCaskill has said that any “thinking person” would view this transaction as illegal, the problem she and her bill will face is the obvious discriminatory nature of the substance of the bill. She and her political directors have obviously not thought through this rash decision, which is understandable to some point given she wrote this bill before the Senate has had any opportunity to conduct an investigation into the Allergan deal with the Saint Regis Mohawk Tribe. Such legislation by ambush without any consideration of the issues, let alone thoughtful consideration, is sadly becoming all too commonplace in America.

Substantively, McCaskill’s bill says only this:

Notwithstanding any other provision of law, an Indian tribe may not assert sovereign immunity as a defense in a review that is conducted under chapter 31 of title 35, United States code.

The issue of State sovereign immunity is significant because on January 25, 2017, a panel of administrative patent judges (APJs) of the PTAB entered a series of decisions ending three IPR proceedings initiated by medical device developer Covidien LP prior to institution. Each of the Covidien IPRs challenged the validity of a single patent owned by the University of Florida Research Foundation (UFRF), which the university had previously asserted against Covidien. The IPR decisions of the PTAB explain that public research universities can find protection from review proceedings at the PTAB by claiming rights afforded them by the 11th Amendment. See UFRF’s Win on 11th Amendment at the PTAB.

What this means is McCaskill’s bill cannot and will not remove claims of sovereign immunity from PTAB proceedings. McCaskill’s bill would only discriminate against Native American Indian Tribes.

The only possible outcome of enacting the McCaskill bill would be to prevent Native American Indian Tribes from developing Technology Transfer offices that have the same inherit sovereign advantages of state universities.

An important question needs to be asked: Why is everyone so upset that Native American Indians are asserting sovereign immunity? No one was upset when it was the University of Florida Research Foundation. Would Senator McCaskill or other call it clearly illegal if Allergan or other companies were to do the same deal with a state university instead of a Native American Indian Tribe?

Discriminating against Native American Indian Tribes in order to continue a one-sided patent review process that unfairly disadvantages patent owners (see here, here, here and here, for example) is as unwise as it is unbelievable. After all, in a few months there is the very distinct possibility that the Supreme Court will rule all PTAB challenges to be unconstitutional, so why would Senator McCaskill submit obviously discriminatory legislation? Why would anyone in Congress rush to back this ill-conceived, mean-spirited piece of legislation that would do nothing other than once again subjugate American Indians?

Rather than rushing to discriminate, once again, against Native American Indians perhaps Senator McCaskill and others should take a critical look at why patent owners are lining up in search of deals with Indian Tribes. The PTAB is a rouge tribunal that must be addressed. Acting as if patent owners and Native American Indians are to blame for searching for a solution to the PTAB is misplaced and out of touch.