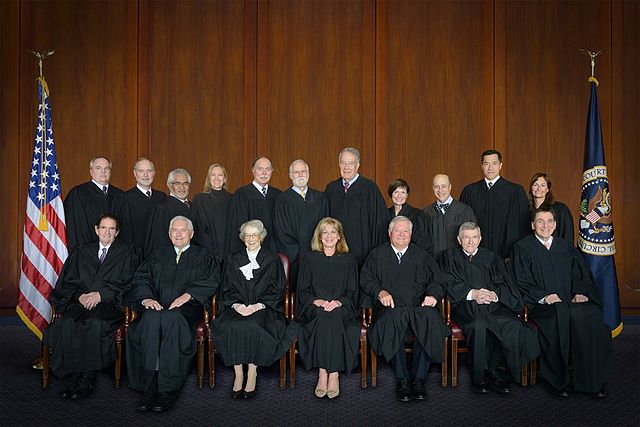 The ruling of the court was described to be “narrow” by Judge O’Malley, who wrote for the majority, because there was no consensus among the Judges with respect to the judgment that should be reached and the rationale that should be employed. The lack of consensus would explain it took the Federal Circuit ten-months after the oral arguments in this case to issue a decision.

Judge O’Malley did, however, explain that the majority of the Federal Circuit found the statute on this point to be ambiguous and, therefore, no deference was given to any interpretation of the United States Patent and Trademark Office (USPTO) under Chevron, U.S.A., Inc. v. Natural Resources Defense Counsel, Inc., 467 U.S. 837 (1984).

The entirety of the Aqua Products decision covers some 135 pages, with concurring opinions and dissents. Obviously, much more detailed analysis will be required to parse this decision in the coming days and weeks. Stay tuned as we will have much more to say. For the time being, for those interested in understanding the Federal Circuit’s decision in a nutshell, Judge O’Malley provides a nice summary of the Federal Circuit’s decision. Judge O’Malley’s majority was joined by Judges Newman, Lourie, Moore, and Wallach, with Judges Dyk and Reyna concurring in the result.

Upon review of the statutory scheme, we believe that § 316(e) unambiguously requires the petitioner to prove all propositions of unpatentability, including for amended claims. This conclusion is dictated by the plain language of § 316(e), is supported by the entirety of the statutory scheme of which it is a part, and is reaffirmed by reference to relevant legislative history. Because a majority of the judges participating in this en banc proceeding believe the statute is ambiguous on this point, we conclude in the alternative that there is no interpretation of the statute by the Director of the Patent and Trademark Office (“PTO”) to which this court must defer under Chevron, U.S.A. Inc. v. Natural Resources Defense Council, Inc., 467 U.S. 837 (1984). And we believe that, in the absence of any required deference, the most reasonable reading of the AIA is one that places the burden of persuasion with respect to the patentability of amended claims on the petitioner.1 Finally, we believe that the Board must consider the entirety of the record before it when assessing the patentability of amended claims under § 318(a) and must justify any conclusions of unpatentability with respect to amended claims based on that record.

Because the participating judges have different views—both as to the judgment we should reach and as to the rationale we should employ in support of that judgment, as explained below, today’s judgment is narrow. The final written decision of the Board in this case is vacated insofar as it denied the patent owner’s motion to amend the patent. The matter is remanded for the Board to issue a final decision under § 318(a) assessing the patentability of the proposed substitute claims without placing the burden of persuasion on the patent owner.

The footnote from the above quotation reads:

Also of great interest, in pages 37 to 40 of the majority decision, Judge O’Malley tackles the issue of whether Congress intended to allow patent owners the right to amend. Judge O’Malley explained: “Congress made clear that patent owners may propose amendments to their patents as of right at least once in an IPR.”

And then on page 40, Judge O’Malley further explained: “By reading too much into § 316(d) and too little into § 316(e), the PTO effectively injects illogic into that framework and undermines its function and purpose.”

Ultimately, the precedential ruling is quite narrow, as Judge O’Malley explicitly explains on pages 65 to 66. What is clear, however, is that the PTAB must assess proposed substitute claims without placing the burden of persuasion on the patent owner. Furthermore, O’Malley wrote:

The Board must follow this same practice in all pending IPRs unless and until the Director engages in notice and comment rulemaking. At that point, the court will be tasked with determining whether any practice so adopted is valid.