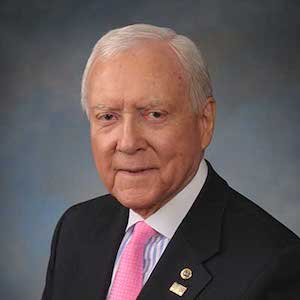 Yesterday, Senator Orrin Hatch (R-UT) wrote an op-ed in the Medium, which explained that he would convene a meeting of the Senate Republican High-Tech Task Force in order to hear from patent experts on the impact of the U.S. Supreme Court’s ruling in TC Heartland, and to discuss what Congress can do in terms of additional patent reform in order to improve the U.S. patent system.

Senator Hatch also explained in his op-ed that this meeting would also the inter partes review (IPR) process, which he said “is an issue that warrants Congress’ attention.” Finally, Senator Hatch said that his meeting of Republican on the High-Tech Task Force would discuss patent eligibility issues, seemingly voicing concern over the consequences for drug companies and software patents. “If treatments derived from natural processes cannot be patented, life science companies may find their intellectual property rights sharply curtailed,” Hatch wrote. “And if software patents for business methods like third-part escrow are wholesale invalid, business software developers may turn their attention to other products.”

Hatch ended by saying: “We must do all we can to ensure our patent system functions smoothly, effectively, and efficiently.”

The Hatch op-ed would seem to be music to the ears of beleaguered patent owners in the life science and computer implemented innovation areas. The problem, however, is with those the Senate Republican High-Tech Task Force heard from during this private meeting.

All of those identified by POLITICO are closely tied to the so-called patent infringer lobby. This list of individuals is anything but fair and balanced. To call it one-sided in their views on the patent system would be putting it mildly.

While there is absolutely nothing wrong with interested individuals and companies lobbying Congress on issues of importance, there is something fundamentally wrong when Congress continues to hear only from one side — those that prefer weaker patents, easier invalidity challenges, and less to be patent eligible.

Hopefully Senator Hatch, who has historically be a defender of the patent system and a friend to innovators, will reach out to the other side in order to offer a balanced perspective to the Senate Republican High-Tech Task Force. Such a briefing should include highly successful independent inventors who can authoritatively explain the need for strong patent protections (i.e., Dr. Gary Michelson, Jay Walker, Dean Kamen), technology transfer officials from major universities with an established track record on innovating (i.e., Wisconsin Alumni Research Foundation), major corporations that believe in a strong patent system (i.e., IBM, Qualcomm), and thought leaders who are critical of recent legislative changes and Supreme Court decisions (Chief Judge Paul Michel (ret.), David Kappos, Adam Mossoff). There are obviously others who qualify to provide their viewpoint to Congress, but in each instance those identified are well know on Capitol Hill, well-versed and respected.

Only through a balanced presentation of what has become a truly devastating reality for innovators will Congress get any true sense for what really needs to be done to achieve a fair and functional patent system that operates smoothly, effectively, and efficiently.