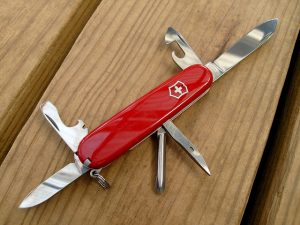 On Tuesday, September 19th, Victorinox AG, the manufacturer of the well-known Swiss army knife, saw a successful outcome of an appeal decided by the U.S. Court of Appeals for the 2nd Circuit, which affirmed in part a judgment in a trademark case filed in the Southern District of New York. The 2nd Circuit’s decision upholds a $1.75 million judgment entered in district court against Dallas, TX-based e-commerce company B&F System over the sale of red-handled, multi-functional pocket knives that infringed upon Victorinox’s registered trademark.

Victorinox first filed its complaint in this case back in June 2013 a few months after the Swiss company discovered that B&F was making and importing a knife product branded as “Royal Crest”, which infringed upon Victorinox’s trademark. Victorinox owns U.S. Trademark Registration No. 3546920, which covers the use of red handles applied to the outside portion of multifunction pocket knives. Victorinox was alerted to the importation of the “Royal Crest” knives by U.S. Customs in March 2013 and the company alleged that the knockoff knives copy the dimensions, contours and tool placements of the genuine Swiss army knives manufactured in Switzerland, “including the placement of a white toothpick and metal tweezers in the knife body and a provision of an attachment ring.” The infringing knives also included a cross and shield located in an area on the handles which is similar to the genuine Swiss army knife design.

The appeal to the 2nd Circuit comes after a couple of judgments entered in the district court which found in favor of Victorinox. An order filed in March 2014 dismissed a motion for summary judgment from B&F for unfair competition and cancellation of the ‘920 trademark. That same order granted Victorinox’s summary judgment for violations of both the Lanham Act as well as common law. Another order filed in June 2015 found that the Victorinox trademark was valid and that B&F had no equitable defense in the case because B&F could not prove that it had clean hands. “Even viewing the evidence in the light most favorable to defendants, the conclusion that defendants intentionally infringed plaintiffs’ trademark and trade dress is inescapable,” the order reads.

Judge Jed Rakoff entered a final judgment in the district court case on October 22nd, 2015, which awarded Victorinox trebled damages for trademark infringement of nearly $8 million. Judge Rakoff also awarded Victorinox $1.3 million in attorneys’ fees, pre-judgment interest of nearly $507,000 as well as post-judgment interest. The final judgment also enjoined B&F from manufacturing, importing or selling any products bearing the mark owned by Victorinox. The trebled damages were reduced to $1.75 million in a memorandum order issued by Judge Rakoff in December 2015. The district court reduced the damages based on a statute of limitations defense, which based the damages award on the sale of the infringing knives going back to June 2007, six years before Victorinox filed its case.

In the appeal at the 2nd Circuit, the judicial panel deciding the case provided a two-stage analysis of the trademark infringement claim to determine whether the mark merits protection and whether the infringing use was likely to cause confusion. In determining the validity of the Victorinox mark for the first stage of the analysis, the 2nd Circuit panel considered B&F’s argument that the mark should be cancelled on grounds of fraud and functionality. The 2nd Circuit panel found that B&F could not prove that the mark wasn’t substantially exclusive to Victorinox based solely on the argument that other companies had used the mark in the past. On the charge that the mark couldn’t be registered because it provided utilitarian functionality, B&F submitted no admissible evidence that could be used to prove that charge.

In the second stage of the validity analysis, the 2nd Circuit panel agreed with the district court that Victorinox had provided overwhelming evidence that B&F’s use of the mark was likely to cause consumer confusion with the original Swiss army knife. The panel noted that at least one customer had returned B&F’s infringing knife to Victorinox, mistaking it as an original. The panel also upheld the district court’s finding of knowing and willful infringement of the marks as B&F continued to produce the knives even after the shipment was seized by U.S. Customs.

Where B&F did achieve some victory was on the scope of the injunction as the 2nd Circuit panel agreed that it was overbroad, preventing B&F from engaging in legitimate business outside of the pocket knife-based claims. The panel found that the language of the injunction could be read as prohibiting B&F from arguably legal conduct in producing multi-function pocket knives that didn’t infringe the Swiss army knife mark or producing other products, like kitchen utensils, bearing the “Royal Crest” symbol. This part of the decision was remanded to the district court with instructions to narrow the scope of the injunction.

The scope of the injunction would be the only part of the district court’s decision which was vacated and remanded. B&F attempted a motion to vacate the district court’s judgment pursuant to Federal Rule of Civil Procedure 60(b)(2), the statute governing a party’s ability to produce new evidence discovered later in the case, which is relevant to the merits of the litigation. B&F wanted to produce two letters from 30 years ago sent to B&F’s counsel at that time to show that Victorinox knew about the alleged infringement many years before filing suit. However, the 2nd Circuit agreed with the district court that the letters, found in B&F’s own correspondence files with its trademark attorneys, could have been produced earlier because it was in their possession and control. Finally, B&F lost on an argument to disqualify Locke Lord as counsel for Victorinox because Locke Lord also represented B&F during 2015. Despite troubling aspects of the record, such as the absence of informed consent for the concurrent representation, the district court did not err in finding that there was no actual or apparent conflict of interest. “The concurrent representation began approximately eleven months after the district court entered judgment against Defendants, and there was no evidence that Plaintiffs’ litigation team obtained any material information from the B&F litigation team,” the 2nd Circuit’s opinion reads.