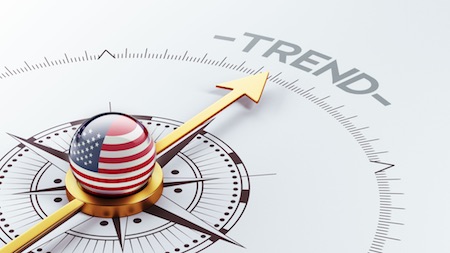 This article aims to review recent trends in findings of willful infringement and enhanced damages in patent infringement litigation, both in volume of motions made and the success rate of those motions.  However, to appreciate current trends since the Supreme Court handed down Halo Electronics, Inc. v. Pulse Electronics, Inc.,136 S. Ct. 1923 (2016) a brief historical review is helpful.  This brief overview does not replace a thorough study of historical cases on willful patent infringement, but I will leave such an undertaking to academia.  For practitioners and industry leaders concerned with the current state of the law and trends in motion practice, what follows should suffice as a refresher.

In 1983, the Federal Circuit decided Underwater Devices Inc. v. Morrison-Knudsen Co., 717 F.2d 1380 (1983) which essentially placed an affirmative duty on a defendant to secure noninfringement and/or invalidity opinions of counsel to avoid a finding of willful infringement and enhanced damages.  After nearly a quarter century of that standard, the Federal Circuit swung quite the opposite direction in In re Seagate Technology, LLC,497 F.3d 1360 (Fed. Cir. 2007) wherein the court adopted an “objective recklessness” standard that made willful infringement almost impossible to prove.  Essentially, if a defendant could argue any plausible explanation for a belief of noninfringement or invalidity of a patent, even years after the alleged infringement occurred, claims for willfulness and enhanced damages were almost certainly defeated.

Last year, the Supreme Court took a step back towards the world of Underwater Devices in its Halo decision, although far from a complete return, by adopting a “subjective recklessness” standard, concentrating on the infringer’s knowledge and beliefs as to infringement and validity at the time of the infringement.  While this swing has not restored an affirmative duty on defendants to seek patent opinion letters to avoid findings of willfulness, it certainly increases the relevance of such opinion letters in showing a defendant’s state of mind at the time of the alleged infringement.  Recent district court opinions confirm as much, and as might be expected, the success rate for claims of willfulness and enhanced damages is on the rise.

In one of the first district court cases to apply Halo, the Eastern District of Pennsylvania was confronted with a defendant who obtained a noninfringement opinion sometime around the final day of a 12 to 18 month project. See: Dominion Res. Inc. v. Alstom Grid Inc., No. CV 15-224, 2016 WL 5674713 (E.D. Pa. Oct. 3, 2016) (holding that the defendant’s state of mind on the final day of 12-18 month project was far too late to be defense to willfulness) (appeal pending).  The court ruled that opinion letters obtained so long after infringement began, even if still during the period of infringement, did not absolve the defendant of willful infringement under a subjective recklessness standard.

Shortly thereafter, the District of Delaware was confronted with a case in which the defendant obtained a noninfringement and invalidity opinion well before litigation, and the defendant even modified designs of the products at issue to conform to recommendations contained therein.  See: Greatbatch Ltd. v. AVX Corp., No. CV 13-723-LPS, 2016 WL 7217625, at *1 (D. Del. Dec. 13, 2016) (declining to vacate prior order for summary judgment of no willfulness even in light of higher standard under Halo). Ultimately, the court found the patent was valid, and even with the design modifications the products infringed the valid patent, but the defendant’s conduct could not be considered willful given the opinions of noninfringement and invalidity established before the infringing conduct even began.  The court was careful to note that even though the opinions of invalidity and noninfringement were wrong, they were timely obtained and reasonably relied upon by the defendant, giving a complete defense to a finding of willfulness.

District courts in New York and Florida have also been confronted with applying the new subjective recklessness standard and have considered the absence of opinions letters in determining both willfulness and the amount of enhanced damages.  After a finding of willfulness by the jury, the District of New York considered to the absence of a formal opinion letter in enhancing the damages award.  See: PPC Broadband Inc. v. Corning Optical Commc’ns RF, LLC, 6-13-cv-01950, No. 511CV761GLSDEP, 2016 WL 6537977, at *1 (N.D.N.Y. Nov. 3, 2016) (The lack of formal opinion letter was considered by Court after a willfulness finding to enhance damages), appeal dismissed sub nom. PPC Broadband, Inc. v. Corning Optical Commc’ns (Dec. 12, 2016).  Similarly, the District of Florida ruled that the absence of a formal opinion letter persuasively demonstrated that the defendant had no knowledge of its invalidity defense at the time of infringement, and when viewed in combination with other surrounding factors, the infringement was willful.  See: Omega Patents, LLC v. Calamp Corp., 6:13-cv-01950 (M.D. Fla. April 5, 2017) (order granting enhanced damages) (“[Halo] has eliminated the ability of an accused infringer to posit reasonable invalidity defenses which were not relied upon at the time the accused products were introduced into the market.”).

Trends in Willfulness and Enhanced Damages

The trends in findings of willfulness and the granting of enhanced damages post-Halo show both an increased volume and rate of success consistent with what a practitioner might intuitively expect – the more stringent standard of subjective recklessness has resulted in a recent rise in the success rate of motions for willfulness and motions for both willfulness and enhanced damages.  Interestingly, there was a dip in such findings of willfulness and awards of enhanced damages in the second half of 2016 after Halo, but this short period could have simply been a period in which the courts were reconsidering how to apply Halo.  This is an especially plausible explanation given the often slow pace of patent litigation and the deliberate nature of judicial rulings in light of new guidance from the Supreme Court. 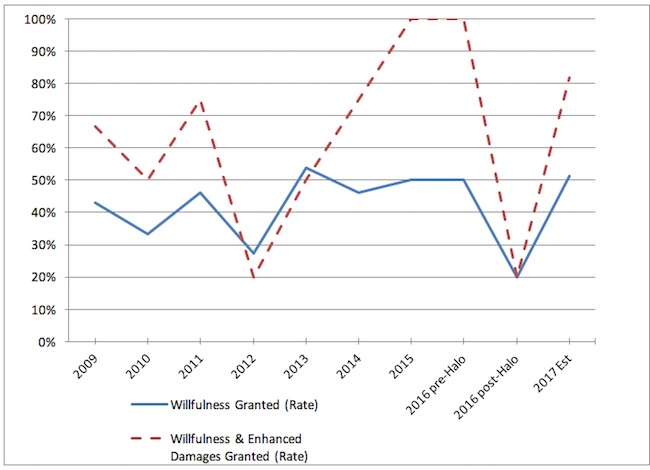 Based solely on the success rate, it is also interesting that such rates initially appear higher just prior to Halo.  However, when viewed in light of the total number of motions made to the courts, a likely explanation quickly emerges.  In 2015, only 6 motions for willfulness were considered, and only 2 motions for both willfulness and enhanced damages were considered.  As of July 31, 2017, it is estimated those numbers will be 41 and 11 for the calendar year 2017, respectively.  The second half of 2016 alone saw five times as many motions for willfulness as the first half of the year.  This dramatic rise in motions considered by the courts likely reflects emboldened plaintiffs hoping to test the bounds of the new standard under Halo.  As such, there were likely many motions which were no more than “test cases” to see just how much higher the expectations were for defendants under the subjective recklessness standard.

The trends in both total number of motions for willfulness and enhanced damages considered by the courts, coupled with the clear rise in success rates of those motions over the last year, suggest that issues of infringement and invalidity deserve careful consideration by would-be infringers.  The Courts have not returned to requiring noninfringement and invalidity opinions of counsel to defeat a claim of willfulness, but such opinions certainly do not hurt.  On the other hand, a defendant which finds itself facing willful infringement allegations without an opinion letter of counsel already on hand need not necessarily fret, assuming the existence of other circumstances showing that the infringement was not, in fact, willful.  While opinion letters are a useful tool to defend against willfulness, they are only a part of the evidence a jury will consider to determine the state of mind at the time infringement began.  Given the rise in motions for willfulness and enhanced damages, it would be logical to assume the patent world will see a corresponding rise in infringement and invalidity opinions as well, but many infringers may still overcome charges of willfulness even in the absence of opinions letters by relying upon other convincing evidence to prove they did not in fact mean to infringe.

JD Wooten is an Associate with the Intellectual Property Group of Womble Carlyle. JD assists clients in securing and protecting their creative rights in patent, trademark, and copyright matters with a focus [...see more]