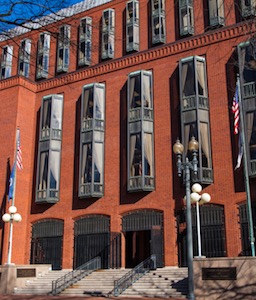 Earlier today the United States Court of Appeals for the Federal Circuit struck down a much criticized venue test created by Judge Rodney Gilstrap of the United States Federal District Court for the Eastern District of Texas. See In re: Cray Inc. The case worked its way to the Federal Circuit on a petition for a writ of mandamus, seeking an order vacating the order of Judge Gilstrap refusing to transfer the case in question to the Western District of Wisconsin. Raytheon Company opposed the petition.

While not going into great detail with respect to Judge Gilstrap’s four-factor test for venue, the Federal Circuit did rule that it “is not sufficiently tethered” to the “statutory language.”

Cray sells advanced supercomputers that Raytheon accuses of infringement. Cray is a Washington corporation with its principal place of business located there. It also maintains facilities in Bloomington, Minnesota; Chippewa Falls, Wisconsin; Pleasanton and San Jose, California; and Austin and Houston, Texas. Although Cray does not rent or own an office or any property in the Eastern District of Texas, it allowed Mr. Douglas Harless and Mr. Troy Testa to work remotely from their respective homes in that district.

Mr. Testa worked for Cray as a senior territory manager while residing in the district from 2010 to 2011 before the underlying suit was filed.

Mr. Harless worked as a “sales executive” for approximately seven years with associated sales of Cray systems in excess of $345 million. Mr. Harless received reimbursement for his cell phone usage for business purposes, internet fees, and mileage or “other costs” for business travel. Cray provided Mr. Harless with “administrative support” from its Minnesota office. He provided “price quotations” to customers, listing himself as the “account executive” and the person who prepared the quotation. The communications also identified his home telephone number as his “office” telephone number with an Eastern District of Texas area code. Mr. Harless, however, did not maintain Cray products at his home, nor did he maintain product literature at his home because it was available online. Cray never paid Mr. Harless for the use of his home to operate its business, or publicly advertised or otherwise indicated that his home residence was a Cray place of business.

Cray moved to transfer the patent infringement lawsuit filed by Raytheon under 28 U.S.C. § 1406(a), arguing that Cray does not “reside” within the Eastern District of Texas in light of the U.S. Supreme Court’s recent decision in TC Heartland LLC v. Kraft Foods Group Brands LLC. (see case commentary here). Cray further argued that venue was improper because no acts of infringement occurred in the Eastern District of Texas, and no regular and established place of business was maintained within the district. Judge Gilstrap disagreed, finding that the Federal Circuit’s decision in In re Cordis Corp. resolved the matter. Nevertheless, Gilstrap went on to set out a four factor test for other litigants and counsel as to what in his opinion constituted a regular and established place of business “in the modern era,” although Gilstrap declined to apply those factors in this case.

The Federal Circuit began its substantive discussion with the meaning and history of the venue statute, and cautioned district courts to keep this history in mind and not to improperly “conflate showings that may be sufficient for other purposes, e.g., personal jurisdiction or the general venue statute, with the necessary shoring to establish proper venue in patent cases.” This is necessary because “regular and established place of business” requires more than minimum contacts for establishing personal jurisdiction.

The Federal Circuit would go on to explain that in determining whether a defendant has a regular and established place of business within a district in order to make venue proper requires analysis of the unique facts of the case, and for which there is “no precise rule.”

“The fact that Cray allowed its employees to work from the Eastern District of Texas is insufficient,” wrote Judge Lourie as he shifted to the specifics of the case before the Court. Lourie would go on to point out that Cray did not own, lease, rent or pay for any portion of the employees’ homes. Furthermore, Cray played no role in selecting the location, storing inventory, conducting demonstrations, maintaining the locations or in decisions relating to terminating the location of the residences.

“The statute clearly requires that venue be laid where ‘the defendant has a regular and established place of business,’ not where the defendant’s employee owns a home in which he carries on some of the work that he does for the defendant.”

Judge Lourie distinguished these facts in this case from Cordis based on the fact that in Cordis “it was clear that the place of business was established by Cordis.” Furthermore, in Cordis, the appellant there received secretarial support services from a third-party provider that was located within the district, another distinguishing factor.

While the Federal Circuit would point out several times that there are no precise or limiting rules when determining venue based on the alleged existence of a regular and established place of business, factual inquiries that are relevant were identified. For example, if the defendant pays for the location that would be relevant and tend to show a regular and established place of business, as would the defendant advertising an address or location on a website, for example. Of course, reality still matters more than advertising according to the Federal Circuit, so even if a location were identified by a defendant it would still be necessary to actually conduct business at that particular location.

I am not suggesting that I think Judge Gilstrap was correct, or that his four-factor venue test was appropriate, but rather noticing that ordinarily these types of decisions do not make for successful mandamus petitions. Of course, in the patent world these are no ordinary times. The question still remains, however, about how receptive the Federal Circuit will be to mandamus petitions moving forward. Is this a blip on the radar? Only time will tell.