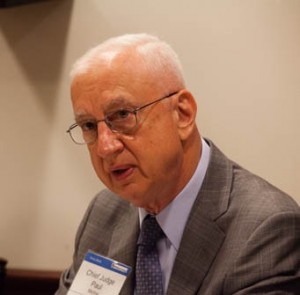 On Tuesday, September 12th, former Chief Judge Paul Michel presented supplemental testimony to the House Judiciary Committee’s Subcommittee on Courts, Intellectual Property and the Internet following up on testimony given by Judge Michel at a July 13th hearing of the IP subcommittee on the subject of patent reform. At the hearing, Judge Michel testified on issues with patent validity trials at the Patent Trial and Appeal Board (PTAB), especially ways in which leadership at the U.S. Patent and Trademark Office appeared to be misinterpreting statutes handed down by Congress with the passage of the America Invents Act (AIA) of 2011, among other issues.

To fix the current incarnation of the U.S. patent system and reinvigorate the American economy, Judge Michel called upon the House IP subcommittee to adopt seven specific action items. Five of the action items relate to improvements to patent law for the strengthening of patent rights while optimizing PTAB procedures already in place, while two other action items focus on the administration of the USPTO.

Judge Michel’s first action item focused on amendments which could be made to the AIA to create a level playing field in the patent space. “After six years, the AIA has caused more harm than good,” Judge Michel’s statement reads. Specific AIA amendments which Judge Michel called for mirrored some of his testimony in front of the House IP subcommittee during the July hearing. These include an off-ramp to reexamination processes, respect for the patent owner’s right to amend claims, dismissal of the broadest reasonable interpretation (BRI) claim construction and application of both the clear and convincing evidentiary standard and the presumption of patent validity. Judge Michel also calls for the PTAB to make sure that the decisionmaker who institutes a patent validity review trial is different than the panel who end up deciding on the merits of the case; in the July hearing, Judge Michel noted that this particular activity was happening in an apparent conflict with AIA statutes governing the institution of review proceedings. Implementing an Article III standing requirement would also help decrease the burden on PTAB and USPTO resources and “increase the fidelity of the review process.”

Second, Judge Michel calls for Congress to amend 35 U.S.C. § 101, the statute governing patentable subject matter, in order to fix the “chaos” into which the U.S. patent system has descended after recent decisions in patent cases before the U.S. Supreme Court. Specifically, Section 101 should be amended to recognize that a patent claim with a physical aspect or element satisfies patent eligibility; to clarify that processes containing purely mental steps are not patent eligible; and to add the language, “Eligibility shall not be denied based on any judicially-imposed exceptions.” Legal uncertainty surrounding basic patent eligibility in the U.S. “is devastating American business, including high tech, manufacturing, biotech, and pharmaceutical industries.”

In response to further confusion created by SCOTUS in its decision this May in TC Heartland, Judge Michel called upon Congress to make amendments to the patent venue statute codified in 28 U.S.C. § 1400(b). Because TC Heartland didn’t interpret the second part of the patent venue statute concerning a “regular and established place of business,” courts have been forced to define that language and have come up with differing interpretations. Judge Michel suggests that amendments to this statute recognize that the “regular and established place of business” should not include a place where a company merely has transient employees and activities, or locations where a limited number of employees either work remotely or telework.

To ensure that the USPTO has the resources necessary to conduct its activities and improve the quality of patent examination, fee diversions from the USPTO which amount to a tax on innovation should be ended. As Judge Michel notes in his supplemental testimony, nearly $410 million was diverted from the agency for non-agency purposes between 2010 and 2014.

The final two action items in Judge Michel’s supplemental testimony focus on the USPTO’s leadership, including a call to require that the agency’s director be qualified and admitted to the patent bar. “This requirement will ensure that the PTO Director has the necessary technical knowledge to fully execute the PTO’s mission,” Judge Michel writes. “While the PTO Director need not be a technical expert, having the minimum scientific education is critical to effective leadership.” This would require any USPTO director to have a patent bar registration number. Andrei Iancu, President Donald Trump’s nominee to serve as the next USPTO Director, is registered to practice at the USPTO and would thus fulfill such a qualification requirement called for by Judge Michel.

Finally, Judge Michel called upon Congress to give the USPTO Director the authorization to reward patent examiners who provide excellent work as well as discipline those examiners which engage in improper conduct. “ In recent years, the PTO Director has been unnecessarily hampered by burdensome rules governing employee misconduct and responsibility, as well as insufficient means to reward the best employees,” Judge Michel writes. Specifically, the USPTO Director should have the power to award to the best patent examiners cash bonuses not to exceed 5 percent of the examiner’s per annum. The Director should also be authorized to expeditiously dismiss employees who commit egregious misconduct. Further, Judge Michel calls for improvements to examiner training and continuing education with an emphasis on both claim construction and 35 U.S.C. § 112, the statute governing patent specification.

Judge Michel’s supplemental testimony also includes a series of answers to questions posed by Rep. Darrell Issa (R-CA), chair of the House IP subcommittee, at the conclusion of the July 13th hearing. As to whether the PTAB should continue activities related to covered business method (CBM) review proceedings, Judge Michel wrote that there is no justification to continue the CBM program past its sunset date in 2020. “Ample time has since passed, the relevant prior art has been collected, and examiner expertise has increased,” Judge Michel writes. “The PTO has also taken steps to further improve its ability to search and identify prior art.” Judge Michel also said that the inter partes review (IPR) shouldn’t be expanded to include other requirements of the Patent Act, including eligibility under Sections 101, 112 or 35 U.S.C. § 102 for sales or public uses, as each eligibility requirement would add costs to the trial process and are unnecessary for various reasons. Finally, Judge Michel also testified that damages law does not need to be revised to deal with situations where patent claims are narrowed after an infringement suit is initiated but before a final judgment. “As I touched on above, the Federal Circuit has developed a robust body of case law that addresses the doctrine of intervening rights,” Judge Michel writes “This settled law can be applied in the AIA context, including the reexamination off-ramp.”