Raid on Gibraltar: How the U.S. Patent System was Rigged Against Independent Inventors 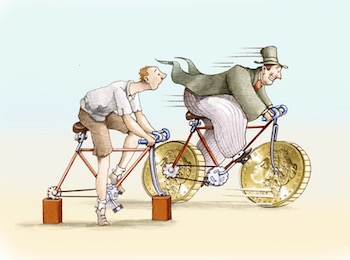 For decades, individual inventors were granted 25 percent or more of all U.S. patents. This creativity was the foundation of dozens of new industries, thousands of new companies and millions of new jobs.

Yet beginning in the early 1980s, their portion of granted patents begin to drop like a rock in free fall.   By 2015, individual inventors received only 5.8 percent.

A decline so great and so fast has profound consequences and is not an accident or fluke.

A useful place to begin the examination of this decline is a 1998 interview of Microsoft co-founder Bill Gates who was asked, “Mr. Gates, what’s your biggest worry? What’s your business nightmare?”

Gates paused a bit and then said, “I’ll tell you what I worry about. I worry about some guy in a garage inventing something, a new technology, I have never thought about.”

Prescient and ironic? Certainly, because at that very moment two guys named Larry Page and Sergey Brin were working in a Menlo Park “garage” inventing Google, which quickly became one of Microsoft’s worst business nightmares.

What Gates really feared was described by economist Joseph Schumpeter as “the gale of creative destruction” – a process of economic mutation that “incessantly revolutionizes the economic structure from within, incessantly destroying the old one, incessantly creating a new one.” Inventors and their inventions most often drive this gale – a process that makes them very dangerous to established ventures such as Microsoft and Apple.

In 1776, Adam Smith described such ventures’ almost baked-in genetic reaction to this Schumpeterian gale: “People of the same trade seldom meet together, even for merriment and diversion, but the conversation ends in a conspiracy against the public, or in some contrivance to raise prices.”

In a 1994 interview now on YouTube, a young, cocky, newly rich Steve Jobs succinctly described in the language of our times how he and Apple dealt with this innovation-driven gale. “Good artists copy,” he said, “Great artists steal. We have always been shameless about stealing great ideas.”

Although Jobs created in Apple what is now the world’s most valuable company and Gates became the world’s richest person, their fears of this creative destruction pervade global commerce. Also common is the willingness of many established ventures to confront the challenge by stealing others’ creations.

To paraphrase Jane Austen “It is a truth universally acknowledged that an established venture in possession of a good market share, must be in want of its competitors’ inventions.”

To facilitate acquiring competitors’ inventions, established ventures in the United States had to contend with competitors’ access to the very same patent rights that abetted the ventures’ own economic success – powerful rights that operate to induce inventors to innovate, and investors to invest. It’s been said that the patents of Alexander Bell, the true father of modern telecommunications, provided him with a “Gibraltar of security.” Established ventures in quest of competitors’ inventions, had, in effect, to conduct a raid on Gibraltar and assume the attendant risks.

First, the Constitution secures via a patent the inventor’s property rights. Note that the word in Article I, Section 8 is “secure” – the inventor already owns his invention from the time of its creation. The U.S. Government’s grant of a patent provides this security and prior to 1980 only an Article III Federal Court and a jury could declare any patent claim invalid.

This security exists in the form of a Social Contract between the inventor and the Government as representative of the public. Per the contract, the inventor pays the steep price of disclosing into the public domain detailed information about his invention, including the best mode to replicate it. In exchange, the Government gives the inventor a patent entitling him to exclusive us of the invention for a set period – a right enforceable in an Article III Federal court.

Both parties to this Social Contract won: By expanding knowledge, the U.S. sought progress. By sharing knowledge, the inventor got legal protections and several years of exclusive use. This contract is a principal reason why the U.S. leads the world in innovations.

The patent system’s second layer of defense was that the patent was issued to the first and true inventor. This gave the inventor time to perfect his innovation. Unlike in Europe, which has a first-to-file patent system, there was no need in the United States to rush to the Patent Office and risk filing a premature application.

Third, the Patent Office was prohibited from disclosing to the public the details of a patent application until a patent was granted. Rejected applications were destroyed – thereby allowing the inventor to practice his creation as a trade secret, or improve it and try again for a patent.

Not surprisingly, weakening this Gibraltar of patent security legislatively, administratively and judicially has been a top political goal of established ventures for most of the past half century. They have spent literally hundreds of millions, if not billions, of dollars lobbying Congress and Presidents and trying to shape the public view.

The principal of these proposed changes was defined in three high level national commissions that were convened between the mid-1960s and 1992. President Lyndon Johnson’s Commission on the Patent System issued its report in 1967.

The recommendations in these three major reports were subsequently echoed in dozens of other studies by other prestigious institutions including the Federal Trade Commission, The National Academy of Science and the National Research Committee.

These Commissions and their recommendations had three common and distinctive characteristics. First, the membership of each Commission consisted almost entirely of (a) executives from major corporations such as IBM, Dow, Monsanto, Hewlett Packard, Procter and Gamble, and 3M – companies who had much to lose from “a guy in a garage”; (b) patent lawyers from the major national law firms that represented these and like corporations; and (c) academics from leading Universities whose research is heavily sponsored by these corporations.

Second, none these Commissions had a single member who was an independent inventor, or someone from a small business entity (500 or fewer employees) or a venture capital investor. Put into perspective when these Commissions were created, individual inventors and small entity companies received almost 30 percent of all U.S. patents granted annually. Yet, they were perceived and treated as a “guy in the garage” threat, which they were, of course. But they were they were given no seat at the table where patent policy was made.

Third, as if by design, the core recommendations made by each of these Commissions significantly weaken patent protections for independent inventors and small businesses in three basic ways.

Each report recommended (1) creating an administrative process inside the Patent Office that could cancel any claim in an issued patent which was a radical shift away from having such decisions made by a jury in an Article III Court; (2) shifting the grant of a U.S. patent from first-to-invent to first-to-file; and (3) requiring the Patent Office to reveal the details of a patent application at some early date, even if a patent were not yet granted.

Over time, Congress adopted every one of these recommendations. On December 12, 1980, public law 96-517 allowed the Patent Office to administratively cancel an issued patent in whole or part. PTO’s administrative powers were expanded in 2002, 2009, and again in 2012.

Taken together, these revisions have reduced the U.S. patent system’s “Gibraltar of security” to a virtual sieve for a crucial and vibrant category of American innovation.

The nation’s patent law now allows any person from any place the right to administratively challenge at the Patent Office any claim in any U.S. patent for the life of that patent. And the challenge can be made anonymously.

The Patent Office regulations state that “any person” may be a corporate or governmental entity as well as an individual. “Any person includes patentees, licensees, reexamination requesters, real parties in interest to the patent owner or requester, persons without a real interest, and persons acting for real parties in interest without a need to identify the real party of interest.”

Moreover, even if a patent claim is found valid in one challenge, another “any person” can challenge it again and another person yet again. Thus, wave attacks are now commonly used to invalidate or suppress the use of patents. Many investors refuse to license or invest in a technology while the patent’s validity is being challenged.

The Patent Office’s internal administrative panel, named the Patent Trial and Appeal Board (PTAB), has enabled virtually all commercially viable patents to be challenged for validity. This is proving to be the means by which well-funded established ventures repeatedly breach the “Gibraltar of security” that patents previously provided to inventors.

In the 56 months between when PTAB went operational in September 2012 and May 2017, PTAB panels decided 1,601 challenges to issued patents. Of these, 65 percent had all claims cancelled.   Put into context, the first administrative cancellation process created by the Patent Office in 1981 (Ex Parte Reviews) cancelled only 12 percent of the almost 11,000 patents in cases they decided in the 35 years between July 1981 and September 2016. 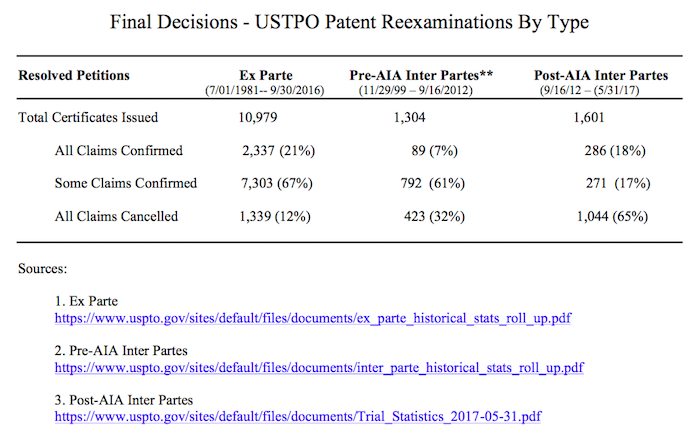 The whole of the research program of many predatory companies and governments is to have their engineers study these published patent applications so they can race to market before the inventor can.

A telling measure of this harm is the extraordinary decline in the number of U.S. patents sought and granted to individual inventors during the period of these three changes in U.S. patent policy and law. 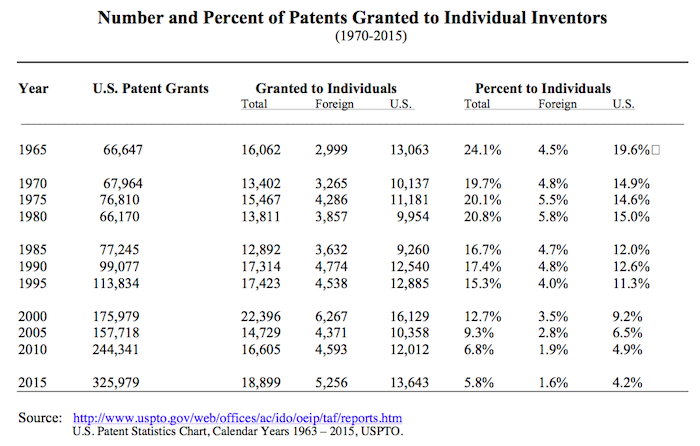 In the 1960s and 1970s, individual inventors were granted almost 20 to 25 percent of all U.S. patents. But as the U.S. permitted administration cancellation of patents outside of an Article III court, required full and early disclosure of unprotected patent applications, and shifted to a first to file priority system, a growing portion of individual inventors either stopped inventing or stop seeking patent protections.

In sum, if there is any example of a nation squandering its technological seed corn, this systematic weakening of U.S. patent protections for some “guy in the garage” is it. The great irony is that most of the people behind the screen in all this got their start in that same “garage.” They know this all too well, which is why they’re relieved to see the garage all but Closed for Business.

UPDATED Sunday 11:21pm PT to fix a typographical error in the penultimate paragraph.

is an economist and author of many books, including the acclaimed Hot Property: The Stealing of Ideas in an Age of Globalization.

is an attorney and author of Bright Ideas at Risk; she served formerly in the U.S. Department of Commerce as Assistant General Counsel for Litigation and Finance.