It is unfortunately very easy to come across offensive screed regarding the U.S. patent system which does far more to confuse the mainstream opinion of the nation’s current patent law environment than it does in actually informing readers about the real issues in play. Many seemingly venerable publications put their reputations on the line regularly all in service of advancing a narrative proving to be ever more damaging to the U.S. patent system day by day. As articles published by Barron’s, Forbes, Fortune and Science prove to any rational observer, there is very little that will stop the anti-patent crowd from pumping out poorly reasoned analysis in service to their own position. Nothing seems to sway them, not easily rebuttable statistics, inconsistencies in their own position on the subject or even hard research on the deleterious effects of recent patent law.

One of the most recent examples of a biased individual making an unprincipled attack on the U.S. patent system has been published by Above the Law, an online news site providing news, insights and commentary on the world of law. On Friday, August 25th, Above the Law published a piece written by Gary Shapiro, president and CEO of the Consumer Technology Association (CTA), entitled Supreme Court Has Another Chance To Help Take Down The Patent Trolls. The article is a reprint of an earlier post from TechDirt, an online tech legal news site which regularly decries “stupid” patents and hurls vitriol in the face of patent owners trying to assert a presumably legitimate property right.

In his article, Shapiro lauds the opportunity given to the U.S. Supreme Court in Oil States Energy Services LLC v. Greene’s Energy Group, LLC, a case which will ask SCOTUS to decide whether the patent validity trial activities conducted by the Patent Trial and Appeal Board (PTAB) operate in violation of the U.S. Constitution. Like many other media manipulators working to muddy the waters of the patent reform debate, Shapiro draws a direct link between so-called “non-practicing entities” (NPEs), firms which own patents but seek to license them instead of practice the technologies they cover, and “patent trolls,” a term which the Federal Trade Commission (FTC) has declared to be prejudicial and which at least one patent owner is seeking a court declaration on whether use of the term constitutes defamation. The use of the term “patent troll” in media coverage has been found to correlate with a high level of subjectivity in reporting, so Shapiro’s article already seems to employ questionable logic by the second paragraph.

“Patent trolls cost the U.S. economy $80 billion each year, or about $1.5 billion a week. The billions of dollars wasted in this way are funds that can’t be invested in research and development or in hiring the innovative talent needed to develop new products and grow the U.S. economy. In fact, a Harvard Business School study found that companies that settle with or lose to trolls lower the amount of money they invest in R&D by 25 percent on average.”

It must be very helpful to Mr. Shapiro’s position to be able to cite a figure published on CTA’s official website without having a further citation to provide the source of the information. Seemingly, the cost of patent litigation reaches $1.5 billion per week simply because the CTA says it does. Also, the decision to cite a figure reported in 2010 by the Cato Institute rings a little hollow when a study on the effects of NPEs on the patent system published in June 2012 not only puts the figure of annual costs much lower at $29 billion, that survey is one which has been identified as employing a deeply flawed methodology that conflates the basic economic terms “costs” and “transfers.” By doing so the $29 billion number has been shown to be over estimated by a factor of four, which obviously casts serious doubt on the $80 billion number that is nearly three times higher than the previously debunked over-estimate. 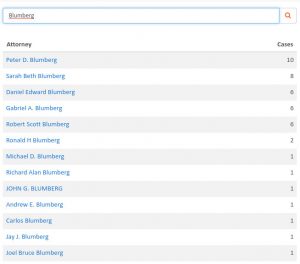 To further tie down his argument, Shapiro trots out some quotes from an former licensing executive from Intellectual Ventures, Ira Blumberg. Blumberg, who Shapiro calls “a former patent-troll lawyer,” has seemingly seen the error of his former ways by noting that the actions of patent trolls “can wreak havoc on tech companies of all sizes.” While Mr. Blumberg is as entitled to his opinions, presenting him as a former patent troll lawyer deserves some questioning as it appears that Blumberg never once represented Intellectual Ventures, or any other client, in the court in an IP case at the district court level. Counsel data compiled by Lex Machina shows no cases listing an Ira Blumberg as counsel going back to January 1st, 2000. Finding out that someone touted as a former lawyer to a patent troll has never actually represented any entity, troll or otherwise, in a patent case renders the statement given by that individual just a little hollow.

Shapiro continues on his defense of the PTAB by noting similarities between patent validity challenges and trials: “Lawyers make their case to the Patent Trials and Appeals Board (PTAB), and three highly qualified administrative patent judges hear their case and come to a decision.” Highly qualified or not, there is at least one administrative patent judge (APJ) who has sat on panels issuing final written decisions on trials petitioned by a former employer, a situation which would require a sua sponte recusal in district court to answer any concerns over potential conflicts of interests. Furthermore, the Patent Office has admitted to stacking PTAB panels so that cases are decided in the manner desired by the Director, which is as difficult to believe as it is stunning. Clearly, the PTAB is not an independent tribunal that exercises decisional independence. The PTAB has also removed pro-patent decisions from its database, refused to consider timely submitted evidence, fundamentally misappled the law of obviousness, determined that an MRI machine is an abstract idea, and blatantly ignoring the law with respect to CBM patents. Shapiro paints a picture of a PTAB that defies experience and simply is not realistic.

“This process is expensive, but it’s considerably less costly than going to court,” Shapiro writes. Who is the process less expensive for? Certainly not the patent owners attempting to assert their property rights. Take, for example, the story of Bunch O Balloons inventor Josh Malone who has spent $17 million thus far to protect his private property against a bevy of validity challenges. From the perspective of the patent owner, PTAB is not cost-effective, it is deleterious.

Finally, Shapiro’s status as an unbiased observer of the patent system is completely shattered when looking at the lobbying activities of the CTA, activities which are under Shapiro’s control. In 2016, the bill which the CTA lobbied for the most was H.R.9, the Innovation Act, a bill notable for containing multiple provisions making it more difficult for patent owners to assert their property rights, enabling efficient infringers. The CTA posted 10 lobbying reports on the Innovation Act and a few of these reports indicate that the CTA was focused on lobbying regarding patent litigation reform. CTA filed six lobbying reports on S.632, the STRONG Patents Act, legislation introduced by Senators Chris Coons (D-DE) and Tom Cotton (R-AR), which would have been more favorable to patent owners had it passed, but it’s obvious that CTA was more interested in the bill that favored infringing parties over patent owners.

The disingenuous discourse regarding the U.S. patent system permitted by publications purporting to offer well-reasoned analysis is truly discouraging. It is difficult to witness biased individuals and entities who stand to gain from weakened patent rights self-righteously railing against the system and further weaken our international standing regarding the strength of patent rights in our nation.