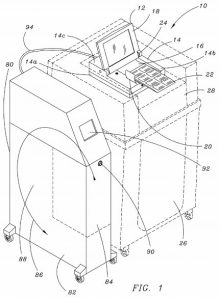 On Monday, August 21st, Omaha, NE-based voting machine firm Election Systems & Software filed a patent infringement suit against election product company Dominion Voting Systems of Toronto, Ontario. Election Systems is asserting a patent on an electronic voting machine technology that provides multiple methods by which a user may cast a vote in an effort to improve accessibility. The suit has been filed in the District of Delaware.

Election Systems is asserting a single patent in the case: U.S. Patent No. 8991701, titled Integrated Voting System and Method for Accommodating Paper Ballots and Audio Ballots and issued to the firm in March 2015. It claims an accessible voting station for use during an election having a voting console to present an audio ballot to a voter and receive voting selections from the voter, a printer to print a ballot including the selections and a reader that scans a portion of the printed ballot to determine voting selections. The voting console of the machine is able to present an audio representations of the determined voting selections to be confirmed by the voter before the votes are cast. The voting machine, which accepts traditional paper ballots, includes the audio module in order to improve accessibility to voting machines for those with impaired vision.

The lawsuit filed by Election Systems identifies the ImageCast Evolution (ICE) voting machine made and sold by Dominion Voting as a product infringing upon the ‘701 patent. Standard features of the ICE voting machine include high resolution scanning tech, fraudulent ballot detection, an ultrasonic multi-feed detector preventing the machine from accepting more than one ballot at a time, as well as ballot review capabilities.

Election Systems notes among its allegations that the ICE voting machine includes an audio component to present an audio ballot to a voter as well as a printer to create a ballot including the voter’s selections. Election Systems also alleges that the ICE machine provides an audio presentation of the scanned voting selections for the voter to confirm his or her voting selections. The suit alleges that Dominion Voting engaged in both direct and indirect infringement of the ‘701 patent by making the ICE machine and inducing customers to use the machines in an infringing manner. Election Systems also alleges that Dominion Voting’s infringement has been willful.

There appear to be relatively few players in the electronic machine sector despite the increased number of voters who will be using such machines in the near future. In the days before last November’s general election, the Pew Research Center published an article noting that 28 percent of registered voters in the U.S. live within districts which only direct-recording electronic machines which incorporate technologies like touch screens. Yet a March 2017 election technology industry report sponsored by the Penn Wharton Public Policy Initiative identifies Election Systems and Dominion Voting as two of three firms which dominate the sector; collectively, Election Systems and Dominion Voting cover more than 80 percent of the vendor marketplace by percentage of eligible voters.