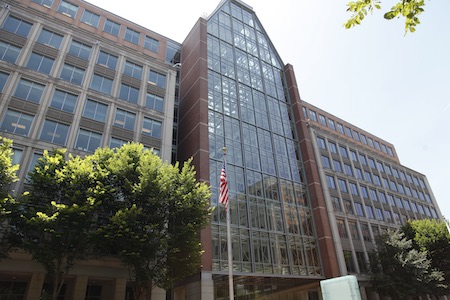 On Thursday, May 4th, the U.S. Patent and Trademark Office’s Patent Public Advisory Committee (PPAC) convened its quarterly meeting at the USPTO’s headquarters in Alexandria, VA. An update on operations at the Patent Trial and Appeal Board (PTAB) was given by PTAB’s Chief Judge David Ruschke. Despite the then recent reports of questionable ethics surrounding potential PTAB conflicts of interests relating to certain Administrative Patent Judges (APJs) (see here, here, here and here), the day’s discussion revolved mainly around appeal inventory, pendency rates and America Invents Act (AIA) trial proceeding trends at PTAB.

The PPAC recently convened once again, this time on Thursday, August 3, 2017. No issues of possible PTAB conflicts of interest were raised and there was no mention of the very serious questions about the appearance of impropriety at the PTAB.

Judges are supposed to be impartial and their decisions must be viewed as being beyond reproach. That is why the Code of Conduct applicable to Article III federal judges appointed as Constitutional judicial officers mandates that a judge disqualify himself or herself when there is even the appearance of impropriety. There is no such set of rules that applies to Administrative Patent Judges (APJs) who make up the Patent Trial and Appeal Board (PTAB), which is utterly astonishing. Indeed, the USPTO has confirmed that APJs are not governed by any specific code of conduct that applies to Judges, but instead only governed by the same extremely lenient ethics code that applies to all USPTO employees. And that is a very serious problem.

APJ Matt Clements represented Apple Inc. as a patent litigator until right before he was appointed a PTAB Judge in March 2013. Just 18 months after Clements left private practice and joined the PTAB he started deciding post grant proceedings where Apple was the petitioner seeking to challenge patent claims. We have so far located 24 final written decisions involving Apple petitions where APJ Clements participated in the decision and the patent owner lost all claims challenged. In only a single decision where Apple was the petitioner did the patent owner enjoy even a split decision (i.e., only losing some claims) when Clements was on the panel. See Apple, APJ Clements and final written decisions: a lethal cocktail for patents.

A federal district court judge that started deciding cases dealing with a former client in the same manner would violate the Code of Conduct applicable to Article III judges. If Clements were still an attorney he would be conflicted to the point where he could not even represent the patent owner against Apple in these cases without violating the rules of professional conduct that applies to practitioners (see Is the ethical bar for practitioners higher than it is for PTAB judges?), yet he was able to decide them as an Administrative Patent Judge on behalf of the USPTO?

On top of this, we have also identified at least one other instance where an APJ has sat on cases dealing with former litigation clients.

Perhaps the USPTO would like this to be swept under the rug. Perhaps the USPTO would like the public to believe that there is nothing new to report, but it has come to my attention that APJ Clements has been removed from at least one panel where Apple was the petitioner in a post grant proceeding. So at the very least there would seem to be something to report to PPAC even if the USPTO finds themselves in a holding pattern unable to really tackle this issue in any formal way until President Trump nominates a new USPTO Director who is then confirmed by the Senate.

While there are many substantive fixes to the PTAB necessary, none are more important than the appearance of impropriety. Yes, there are changes that can and must be made that will make post grant proceedings instantly more fair, and they are severely needed. But if the integrity of the process is in question the entire system is compromised and anything else that is done is merely akin to rearranging chairs on the deck of a sinking ship.

The blindfold appearing in the common depiction of Lady Justice is there for a reason. It’s time to acknowledge that and fix this problem so that this never happens again. The USPTO must adopt a Code of Judicial Conduct for Administrative Patent Judges.