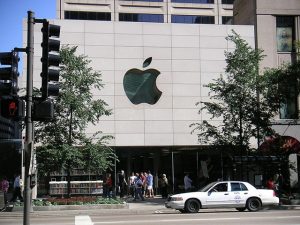 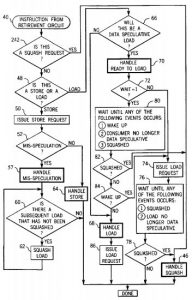 WARF’s original complaint, filed in January 2014, involved the assertion of a single patent: U.S. Patent No. 5781752, titled Table Based Data Speculation Circuit for Parallel Processing Computer and issued in July 1998. It claims a data speculation decision circuit on a processor which can detect a mis-speculation involving a data consuming instruction, the circuit having a predictor receiving mis-speculation indications to produce a prediction associated with the data consuming instruction and a prediction threshold detector preventing data speculation have predictions within a predetermined range. The technology is designed to improve speculation in a data processor when multiple instructions are fetched simultaneously but may be data dependent on other instructions being processed.

According to WARF’s original complaint, the development of the technology protected by the ‘752 patent is recognized as a major milestone in the field of computer microprocessor architecture and design. It lead to the election of Dr. Gurindar Sohi, the leader of the lab developing the technology, into the National Academy of Engineering in 2009. In 2011, Dr. Sori also won the Eckert-Mauchly Award, a prestigious recognition in the field of computer architecture awarded by the Institute of Electrical and Electronics Engineering (IEEE). In 2010, Andreas Moshovos, another researcher contributing to the development of the ‘752 patent, received the Maurice Wilkes Award from the Association for Computing Machinery.

WARF alleged that the ‘752 patent was infringed by Apple’s A7 processor, a 64-bit system on a chip (SoC), the first processor of that kind to be used in smartphones or tablet computers. The A7 included a branch predictor and was installed into a variety of Apple’s consumer electronic devices including the iPhone 5S, the iPad Air and the iPad Mini with Retina Display. Further, WARF argued that Apple was aware of the ‘752 patent as the company filed multiple patent applications which cite to that patent as relevant prior art. “Apple has stated that it is the policy of the company not to accept or consider proposals regarding licensing from outside entities like WARF for any purpose, making the initiation of this lawsuit a necessity,” WARF’s original complaint reads.

Last October, Judge Conley entered an initial judgment in favor of WARF in October 2015 which awarded $234.3 million to WARF on its claims of literal infringement of six claims asserted from the ‘752 patent. The most recent judgment added $272 million to that judgment from October 2015. Along with damages awarded by the jury, Judge Conley added supplemental damages at a rate of $1.61 per infringing unit for accused processors sold since the October 2015 judgment, ongoing royalties at a rate of $2.74 per infringing unit sold between the October 2015 judgment and the expiry of the ‘752 patent in December 2016, along with pre- and post-judgment interest and costs.

It has been a very interesting year for Apple in terms of patent infringement suits, especially where processor technologies are concerned. In late January, Apple officially kicked off a legal dispute with San Diego, CA-based semiconductor developer Qualcomm Inc. (NASDAQ:QCOM) by filing a lawsuit seeking $1 billion in damages, alleging that Qualcomm was unlawfully withholding payments to Apple as part of an agreement for the exclusive use of Qualcomm processors in Apple products. In early July, Qualcomm fired back by filing a Section 337 patent infringement complaint with the U.S. International Trade Commission (ITC); Qualcomm asserted a series of non-standard essential patents in that complaint as a means of answering antitrust allegations. A public interest statement filed with the ITC by Santa Clara, CA-based technology company Intel Corporation (NASDAQ:INTC) included claims by Intel that Qualcomm’s Section 337 complaint “attempts to accomplish something quite different from the ordinary vindication of patent rights.”

Despite Apple’s and Intel’s arguments to the contrary, Apple does seem to be playing fast and loose with its licensing partners recently. In April, news reports indicating that Apple informed British firm Imagination Technologies that the American tech company would stop using Imagination’s technology, designing an in-house processor instead. Imagination’s CEO Andrew Heath was quoted around that time as saying that it would be “extremely challenging” for Apple to design a replacement that didn’t infringe on Imagination’s patented technology, so that could be a legal battle that brews over the coming months.