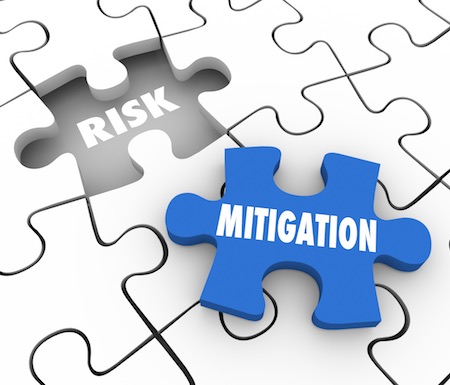 In our previous post, we examined LinkedIn’s patent strategy and the process LinkedIn took to increase its organic patent filings, but that is only one part of the puzzle. Opportunities for risk mitigation can be divided into two categories: increasing organic filings to address future assertion risk and patent acquisition to address present and near future risk. In this post, we’ll analyze LinkedIn’s patent acquisition process and the results of its targeted buying program.

While the increase in LinkedIn’s filings helped to grow the total patent portfolio, challenges remain. First, while organic filings tend to focus on LinkedIn’s core technology and therefore help a great deal with counter-assertion against potential competitors, they are less helpful when it comes to large corporate asserters further outside LinkedIn’s core technology area. Second, the priority dates on all the new filings are recent (after 2011). Earlier priority dates (old inventions) help the most in counter-assertion, but LinkedIn would have had to file for those patents in the 2000s. Fortunately, the market for buying and selling patents is robust and allows companies to fill in where they have weakness in their portfolios. Focused patent buying allowed us to build a counter-assertion portfolio to help bolster any negotiations.

In our experience, the assets most typically used in assertion and counter-assertion negotiations range in age from eight to 16 years from the patent’s priority date. This is also supported by research (eg, Brian Love, “An Empirical Study of Patent Litigation Timing” *University of Pennsylvania Law Review*, Vol 161, p 1309 (2013); Mark Lemley, John Allison and David Schwartz, “Understanding the Realities of Modern Patent Litigation”, 92 *Texas Law Review* 1769 (2014)). Older patents have a chance to be fundamental and pioneering to the industry, as well as to be used by many companies, including operating companies which assert patents. This is not to say that all older patents are useful for counter-assertions, as most cover technologies which were never widely adopted or which are unimportant for industry. Patents that are between eight and 16 years old are old enough to be adopted by corporate patent asserters, yet still have enough remaining life to be useful for a few years.

The importance of older patents is the reason that LinkedIn cannot mitigate today’s patent assertion risk with organic patent filings alone. Due to the eight-year lag from priority date, LinkedIn’s 2012 increases in filings will likely start to make a significant impact in counter-assertion negotiations in 2020. 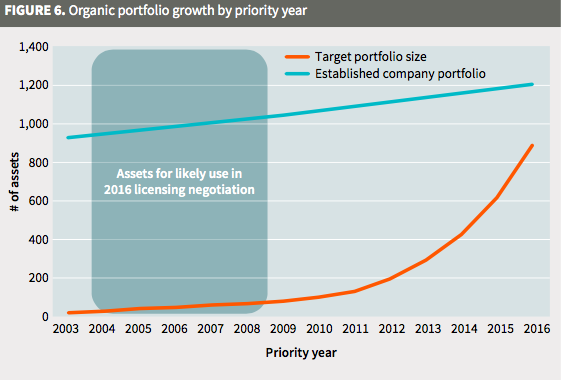 LinkedIn’s phenomenal growth created another challenge: even if it had filed at a rate of 0.25 patents per $1 million spent on R&D, it would not have had sufficient patents to counter an assertion. Referring to Figure 6, if LinkedIn had filed at the target rate through 2008, the likely number of useful assets in its portfolio would still be vastly outmatched by those of an established corporate asserter. In an assertion, the asserter would likely try to map patents from 2004 to 2008 to LinkedIn’s 2016 revenue, but LinkedIn’s organic target filing rate would not yet have created the necessary pool of older patents for potential mapping to the asserter. Additionally, as illustrated in Figure 7, generally only between 1% and 5% of patents in a portfolio are high value in the context of a patent assertion negotiation (see Suzanne Harrison *et al*, *Edison in the Boardroom Revisited*, 2011). With so few filings, the chances that we would find sufficient gems in those early filings were very low. Unlike organic patent portfolio development, where you do not know which patents will be important, you can benefit from hindsight when creating a targeted patent buying program. During a patent assertion negotiation, the important factor to consider is the value of each patent portfolio in context. Any patent in an asserting company’s portfolio which is outside LinkedIn’s technology area or which does not read on its products and revenue has a negligible value in the negotiation. For companies, this value distribution across their patent portfolios in any given negotiating context is log-normally distributed (see Figure 7).

Unlike the asserting company, LinkedIn knows what technologies were adopted by likely asserting companies and from which technologies those companies derive the most revenue. By using this knowledge to focus the buying parameters, LinkedIn can achieve the same value in a counter-assertion as the asserting company, while requiring far fewer assets. The blue areas in Figure 8 are where the majority of value is perceived and exchanged during these patent license negotiations – LinkedIn’s patent buying allowed us to equalize these areas. 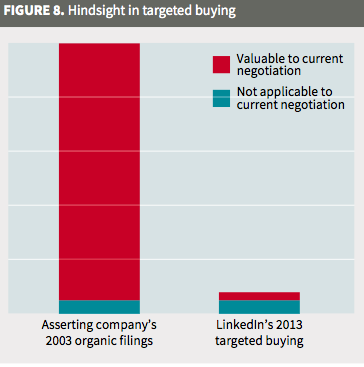 LinkedIn’s targeted buying was focused on backfilling assets with early priority dates for counter-assertion against known corporate patent asserters. Additionally, targeted buying was and still is useful to develop areas in which LinkedIn is not developing organic technology and patents.

The first step in targeted buying is to identify the companies of concern. In the case of LinkedIn, we analyzed the ecosystem to determine companies which might be of concern. Then we reviewed each of these on the basis of past assertion actions, financial strength and technological overlap with LinkedIn – as well as its current and expected business relationship with LinkedIn. In many cases, good business relationships mitigate much of the patent risk and minimize the level of concern. Then we reviewed the potential applicability of any current organic assets – although in 2012, this was an extremely short list. From there, an ROI analysis was carried out to determine whether the expected value of the risk reduction was worth the cost of patent acquisitions. Sometimes it makes business sense to keep a low level of risk rather than to spend an exorbitant amount to remove it. Finally, we completed a revenue analysis for each company to determine the products and technology areas of greatest value to it. Once these technology areas were determined, we created buying criteria (see the first column of Table 1 for example companies and their projected risk). Richardson Oliver Law Group then monitored the brokered patent market, as well as privately sourced packages fitting LinkedIn’s buying criteria (eg, technologies, pricing, priority dates, existence of claim charts (evidence of a company, product, or industry’s use of the patented technology)) (for further detail on the ROI analysis for buying, as well as methods for reducing the total spend, see “The strategic counter-assertion model for patent portfolio RoI”, *IAM* 72).

Patents are often sold by brokers and owners in small packages. The seller supplies a narrative around the value proposition of the package, asset lists, applicable market information, adoption by the market and pricing information (see “The brokered patent market in 2015 –driving off a cliff or just a detour?”, *IAM* 75). We found interesting patent packages on the brokered market, privately by directly approaching other companies and through our corporate development department.

As part of the buying program, from 2012 to 2016 LinkedIn reviewed over 800 patent packages containing over 25,000 patent assets. Ultimately, 13 packages were purchased (equivalent to around 2%), which appears to be a typical rate for corporate purchasers.

If a package was found to meet LinkedIn’s buying criteria, it was reviewed in greater detail to determine its value in the context of a counter-assertion with a particular company of concern or in the context of general backfilling within LinkedIn’s core technology areas. 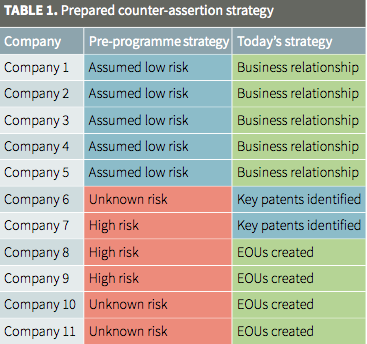 LinkedIn’s patent buying program has substantially improved our readiness against 11 companies of concern (Table 1). LinkedIn now has a playbook response, discussed further below, for each of the 10 identified companies, including:

Now that counter-assertion positions have been established, LinkedIn’s buying will likely slow, although targeted buying will remain an extremely useful tool for mitigating risk from new companies of concern outside LinkedIn’s core technology area.

Crucially, there are more patent risks than are presented here or directly addressed by the patent acquisition program, which focuses on reducing the primary sources of risk. This is not to say that the purchased assets are not valuable against other sources. Because we focused on fundamentally enabling technologies, we can mitigate patent risk from other companies and we did so. 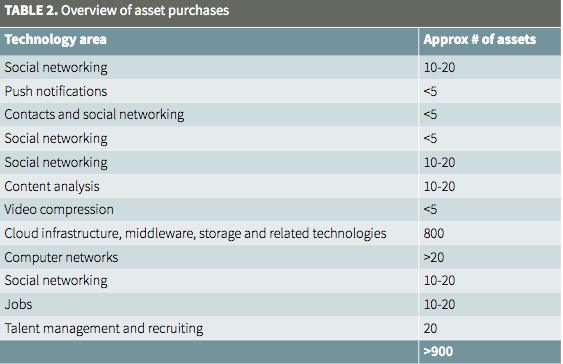 To date, we have purchased more than 900 patent assets across 13 deals (see Table 2). Most of the purchases are in LinkedIn’s core business area of social networking, although there is considerable diversity within those acquisitions (eg, technologies covered include video sharing, new contact identification and messaging). Other acquisitions were outside LinkedIn’s core (eg, telecommunications). Generally, we ensured that our acquisitions favored smaller deals where the value driver patents were clearly identified. We bought from both the brokered market and directly from the owners. Finally, we have had some of our acquisitions reported in the news and recommend that you consider how you might respond when deals are reported.

We participated in a private study comparing over 100 patent acquisitions across multiple companies and also evaluated other purchase data. We found that we paid market rates (slightly below the average) for our acquisitions. Having access to a source of patent pricing data helps immensely when trying to price acquisitions.

The actual acquisition process was relatively straightforward. Deals usually closed within a few weeks of making the decision to acquire. We rarely found ourselves in pricing wars – if we thought that a package would end up having its price inflated, we would look elsewhere. Given that so many assets are available in the market, there is always another deal available tomorrow.

So now with a comprehensive patent strategy in place, how well can LinkedIn execute this strategy for counter-assertion? How prepared is LinkedIn in using its patents to defend against potential patent asserters? In part 4 of our series, we examine the importance of having a prepared counter-assertion strategy.