View from the Courtroom: What to Expect When You Try to Get a TRO in Your Unfair Competition Case 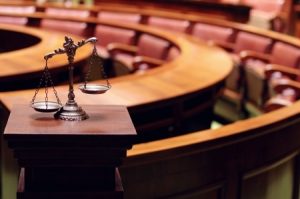 Experience shows that most unfair competition or trade secret theft issues can be resolved without the need for litigation; often, an exchange of letters between the parties’ respective attorneys is sufficient to resolve the matter. However, litigation is sometimes unavoidable, and when it occurs, the employers involved are often surprised by how fast an unfair competition case can move to a practical conclusion, and how little time there might be to prepare for the crucial court hearing.

The most important event in a trade secret or unfair competition litigation is the hearing when the court grants or denies a temporary restraining order, or “TRO.” A TRO is essentially an emergency injunction to prevent the wrongdoing party from taking advantage of his or her illegal activities. The process begins with the filing of a complaint that looks essentially no different than any other lawsuit. The claims are usually pleaded under theories like “conversion” (i.e., theft), fraud, breach of contract, or violations of state and federal trade secret statutes. The difference is that the parties will typically find themselves before a judge in only days, or perhaps only hours after the lawsuit is filed for a hearing that will, for all practical purposes, resolve the case. This is the TRO hearing.

Before a TRO can be granted, the court must be satisfied that the actions of the alleged wrongdoer will cause “irreparable injury” to the party seeking the TRO—in essence, that the harm being done cannot later be remedied by an award of money damages. In the unfair competition context, a TRO is typically sought to require the immediate return of misappropriated trade secret information or to enjoin the alleged wrongdoer from soliciting the other party’s customers or employees. It can be challenging to prove “irreparable injury” because most wrongs can be righted at a later time with an award of money damages. For a TRO to be issued, it truly must be a situation where “the bell cannot be un-rung.”

Another requirement for a TRO is that the moving party show a high likelihood that it would prevail on the merits of its claims if the case was resolved through the ordinary litigation process, ultimately culminating in a trial. In other words, the party seeking a TRO must be prepared to demonstrate to the court that there is very clear and strong evidence of actionable bad behaviors on the part of the alleged wrongdoer.

A risk of irreparable injury and a high likelihood of eventual success on the merits are typically proven to the court by declarations filed with the complaint and TRO papers. Conclusory or vague accusations of illegal conduct will not suffice; the declarations must precisely describe what, when, and how the wrongdoer engaged in unfair competition activities. The challenge of marshaling this information in a very short period of time is further complicated by the fact that unfair competition activities almost by definition are undertaken by the guilty party in secret, and, obviously, he or she is not interested in cooperating with the victims’ attorneys in putting together their case.

Very commonly, the critical evidence in an unfair competition matter comes from forensic examination of IT systems, including email, phone records, and word- processing systems. With surprising regularity, the persons who engage in these sorts of activities do not-so-smart things that leave a clear trail of their wrongdoing, often committed in the final days of their employment with their former employer.

Attempting to get a TRO in an unfair competition case can require a very large amount of work and result in the accrual of significant legal fees in only a matter of days. Before initiating the litigation process, it is critical that the employer accurately assess the viability of its case. Many employers that have thought themselves to be a victim of unfair competition have been disappointed when their case simply did not hold together well enough to justify the issuance of a TRO.

The TRO hearing is often the be-all and end-all of unfair competition litigation because, if it is granted, the unfair competitive activities are immediately stopped, any stolen trade secrets are returned, and the competitive damage to the plaintiff-employer is contained or stopped. The case is usually thereafter resolved by a settlement. Essentially, if the TRO is granted, there typically is not much else of consequence to litigate between the parties.

Conversely, if a TRO is denied, the court’s ruling can effectively take the wind out of the sails of the plaintiff-employer’s case. The court has essentially said, “I don’t see anything wrong going on here,” which means that the employee or person who has allegedly engaged in unfair competition can keep doing what he or she is doing. Here again, it is a rare unfair competition case where a TRO is denied and it makes sense for the plaintiff-employer to continue pressing on with litigation against the supposed wrongdoer. In other words, if you can’t prove to the judge in the context of a TRO hearing that you have a valid claim, it’s probably not going to be any easier to do so later on in the litigation. And it is a very rare situation where an unfair competition claim presents the possibility of a big award of money damages that would make continuing on with protracted litigation worthwhile.

A TRO is deemed to be an “extraordinary remedy,” and an employer seeking one in an unfair competition claim should expect the judge to be cautious and conservative in deciding whether to grant one. Another factor is the often surprisingly small amount of time that the applicant gets in front of the judge to prove its case. Essentially, this is a situation where the TRO applicant is trying to push its way to the head of the line in the court’s crowded docket and saying, “My case can’t wait … I need a court order now.” Skepticism on the part of the judge should be expected.