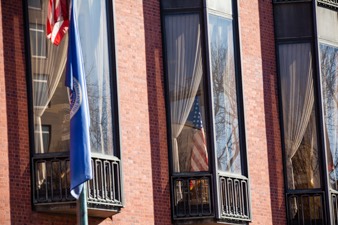 IPCom owns the ’830 patent, which describes and claims a method and system for handing over a mobile phone call from one base station to another. After IPCom sued HTC for infringement, HTC asked the PTO to conduct inter partes reexamination of claims 1, 5-26 and 28-37 of the ’830 patent. The reexamination was granted and underwent two rounds of review. In the first round, the Examiner concluded the claims were patentable. HTC appealed to the Board, which issued a new ground of rejection for claims 1 and 5-30. In the second round, IPCom amended claims 1, 5-26 and 28-37. The Board found these amended claims were obvious under 35 U.S.C. § 103 in view of various combinations of McDonald, Anderson, GSM and PACS. IPCom appealed.

The Court first addressed claim construction regarding the means-plus-function limitation “an arrangement for reactivating the link with the first base station.” The Board rejected IPCom’s proposed three-step algorithm, allegedly disclosed in the ’830 specification for performing the “arrangement for reactivating the link function.” However, the Board failed to identify what it believed to be the correct algorithm from the specification. This led to an incomplete construction of the claim limitation and was incompatible with the Court’s holding in In re Donaldson Co. (Fed. Cir. 1994). In Donaldson, the Court held that § 112 ¶ 6 “sets a limit on how broadly the PTO may construe means-plus-function language under the rubric of ‘reasonable interpretation,’” and “the PTO may not disregard the structure disclosed in the specification corresponding to such language when rendering a patentability determination.” Here, the Board’s analysis was erroneous because it never specified what it believed was the actual algorithm disclosed in the ’830 patent for performing the function. It was not enough for the Board to simply reject IPCom’s arguments.

The Court then rejected IPCom’s argument that the Board could not rely on new grounds of rejection based on the GSM and PACS references. Under 37 C.F.R. § 41.77(c), HTC was not required to “explain why the additional prior art could not have been presented earlier.” Section 41.77(c) only requires HTC’s comments be limited to the Board’s decision and issues raised by IPCom’s request to reopen prosecution. When it reopened prosecution, IPCom amended certain claims, which allowed HTC to cite additional prior art.

The Board correctly found that the prior art discloses the claim limitations in dispute other than the “arrangement for reactivating the link” limitation. PACS discloses a “forced handover request message” by describing a PERFORM_ALT message that is transmitted from the network to a mobile station. PACS also discloses a “handover query” by describing an ALT_REQ message and a “rejection message” by describing an ALT_DENY message. The Board also correctly explained that reactivating the link and the forced handover request message are separate claim limitations.

There was no error in the Board’s analysis of the “informing mobile” station limitation in claims 5-17. Anderson teaches a successful handover, and McDonald describes cases in which handover is unsuccessful by using a busy OSW signal. The Board also correctly rejected claims 23 and 25 in view of Anderson, McDonald and GSM. Substantial evidence supported the Board’s findings that GSM teaches the recited limitation of using different generations of radio communications standards because it discloses using a mobile station that can communicate with both GSM/2G and GPRS/2.5G, which IPCom did not challenge.

Finally, there was no error in the Board’s finding of a motivation to combine McDonald, Anderson, GSM and PACS, except for the “arrangement for reactivating the link” limitation. A person of ordinary skill would have been motivated to combine the teachings of Anderson and McDonald to solve the common problem of unsuccessful handovers. A person of ordinary skill also would have been motivated to combine Anderson or McDonald with PACS, which discloses a “forced handover request message” by describing a PERFORM_ALT message transmitted from the network to a mobile station, a “handover query” by describing an ALT_REQ message and a “rejection message” by describing an ALT_DENY message. Further, GSM discloses using a mobile station that can communicate with both GSM/2G and GPRS/2.5G base stations. In light of their interrelated teachings, combining these four known systems for handover and handoff for cellular telephone systems would have resulted in a predictable result for a system for handing over mobile stations between base stations. The Court vacated and remanded the Board’s findings only on the “arrangement for reactivating the link” limitation.

Finally, the Court rejected IPCom’s argument that the Board lacked jurisdiction to consider the patentability of claims 31-37 during its second round of review because these claims had not been part of the first Board appeal. When IPCom reopened prosecution, it amended all of the pending claims, including claims 31-37. As a result, IPCom altered the scope of these claims and opened the door to permit HTC to challenge the amended claims. The Board properly considered HTC’s challenge to claims 31-37 after IPCom reopened prosecution and amended those claims.

In a patentability determination, the Board must identify the structure of a means-plus-function limitation disclosed in the specification; it is insufficient to merely disagree with patentee’s arguments. Additionally, if a practitioner reopens prosecution and amends claims during inter partes reexamination, additional prior art can be cited against the amended claims.