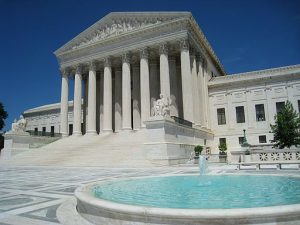 Just over a month ago, the Supreme Court issued its decision in TC Heartland v. Kraft Food Group Brands, and many continue to wonder what the Court’s holding means for patent infringement suits.  In TC Heartland, the Supreme Court held that “reside[nce]” under 28 U.S.C. § 1400(b), the patent-specific venue statute, refers only to the state of incorporation for domestic corporations.  This reasserted the Court’s earlier holding in Fourco Glass Co. v. Transmirre Products Corp. in light of the Federal Circuit’s decision in VE Holding Corp. v. Johnson Gas Appliance Co., which had suggested that amendments to 28 U.S.C. § 1301(c), the general venue statute, had rendered moot the holding of Fourco.  As district courts have begun to address the holding, two core legal questions have arisen: was improper venue an “available” defense before TC Heartland, and what is necessary to show “regular and established business”?  And beyond these legal questions, questions have arisen surrounding a particular practical implication of the TC Heartland decision: will there be a new, de facto patent court?

Was a defense of improper venue “available” before TC Heartland?

It is well-established that the Supreme Court’s application of federal law has retroactive effect for ongoing cases in lower courts, but whether and how defendants in already pending patent infringement suits can benefit from the holding of TC Heartland remains unclear.  Under the Federal Rules of Civil Procedure, a party waives its right to assert a defense of improper venue when it fails to raise the defense in a pleading or with other Rule 12 motions.  Importantly, however, that waiver only takes effect if the defense was “available” to the party at the time of filing either the pleading or motion.  Many circuits, including the Federal Circuit, interpret that requirement by recognizing an intervening law exception to the waiver of a defense, whereby an intervening change in law makes available a defense that had not previously been available.  Does the Supreme Court’s decision in TC Heartland constitute a change in the law?  Was the defense of improper venue unavailable until May 22, 2017?

The district courts have already begun to grapple with these questions, and disagreement has already begun to emerge.  In Cobalt Boats v. Sea Ray Boats, the Eastern District of Virginia held that TC Heartland does not constitute a change in the law.  Rather, the Supreme Court merely reasserted the viability of its earlier holding in Fourco.  While the Supreme Court’s decision does abrogate the Federal Circuit’s interpretation of the patent venue statute, the Eastern District of Virginia noted that the Federal Circuit does not have the authority to overrule the Supreme Court.  As such, VE Holding cannot be considered a change in the law from Fourco, which was and remains good law under the Supreme Court’s decision in TC Heartland.  This understanding of the TC Heartland’s implications has been embraced by other district courts, including both the Eastern and Northern Districts of Texas.  The Federal Circuit has even implicitly supported this view, denying a mandamus petition in response to the Cobalt Boats order.

One court, however, has taken a different stance.  The Western District of Washington, in Westech Aerosol Corp. v. 3M Co., recognized that the Supreme Court’s decision has shifted almost three decades’ worth of patent law precedent.  While an argument for improper venue may have technically have been possible, the defense may now be argued “credibly.”  Because a defendant could not have foreseen the change, it did not waive the defense by omitting it from initial pleadings and motions.  As such, the defendants were free to include improper venue in their motion to dismiss.

It is possible that the differing views among the district courts are the result of the different stages of their respective cases.  The defendants in Westech had moved for leave to amend their motion to dismiss, which had been filed on May 4, 2017 and the response for which was due on the day the Supreme Court decided TC Heartland.  In its order, the Western District of Washington explicitly recognized that “[a]llowing Defendants to bring this newly-available defense will not result in unnecessary delay, nor will it unduly prejudice” the plaintiff.  Meanwhile, the defendants in Cobalt Boats and subsequent cases had filed motions for transfer years after having filed the answers that ultimately waived the improper venue defense.  It seems that, in assessing whether the holding of TC Heartland ought to be considered a change in law, district courts are also considering how far along the case at hand has progressed.

What constitutes “regular and established business”?

Despite all the excitement surrounding the Supreme Court’s decision, those resisting the effects of TC Heartland might still have an alternate route to reaching their desired district.  A patent infringement suit is not absolutely limited to the district of residency, as the venue statute does provide for an alternative: the district “where the defendant has committed acts of infringement and has a regular and established place of business.”  But what does “regular and established place of business” mean?  What factors satisfy this requirement?

The language appears in a patent specific statute, so the Federal Circuit will likely assert these questions as subject to its own interpretation.  But the court has yet to provide any clear answers.  Beyond describing it as a question of “whether the corporate defendant does its business in that district through a permanent and continuous presence there,” the Federal Circuit has largely left the term uninterpreted.  In Cordis, the court did make clear that a permanent physical presence in the district is not necessary for regular and established business albeit a helpful indicator.  But the Federal Circuit has yet to say much more beyond that basic overview.

In the past, more specific understandings of “regular and established business” have largely been developed by regional circuits and the district courts.  At least one district court – the Eastern District of Texas – has recognized the importance of a uniform interpretation of the term in light of TC Heartland.  In Raytheon Co. v. Cray, Inc., the Eastern District of Texas recognized that there was little need to interpret the term in light of the much broader interpretation of venue before TC Heartland.  In an effort to clarify and direct the modern venue analysis by providing a set of factors for assessing whether a defendant has a regular and established business in a district: physical presence (including property and employees), representations by the defendant, benefits received from presence in the district (such as sales revenue), and targeted interactions with the district.  The court relied on these factors, which it describes as “guideposts,” to support a finding of proper venue under the statute’s second prong.  But while the Eastern District of Texas asserted that this four factor test is an effort to combine the competing definitions of “regular and established business,” until the Federal Circuit directly addresses the issue, it remains unclear whether this interpretation will last.

In recent years, the Eastern District of Texas has become a go-to district for asserting claims of patent infringement.  The district’s reputation as a plaintiff-friendly venue has led to it hearing anywhere between a quarter and a half of the nation’s patent infringement suits in recent years.  But the TC Heartland decision has made it much more difficult to file a patent infringement action in the Eastern District of Texas: the majority of cases brought in Texas are against defendants who are not incorporated there.  In light of this, many have wondered whether another court will emerge as the new popular patent court.

Many have unsurprisingly looked to the District of Delaware.  More than half of all publically traded domestic companies are incorporated in Delaware, and, under TC Heartland, the District of Delaware is a proper venue for each of these.  Even the court itself has begun gearing up for an influx of litigation: the district court has invited four judges from the Eastern District of Pennsylvania to fill vacancies on its own bench.  On the other hand, some have also suggested that other district courts, such as the Northern District of Georgia, might become a newly popular patent venue, pointing to a large number companies headquartered in Atlanta as well as to plaintiff-friendly local rules that can rival those of Texas Eastern.

Only time will tell which district court will become the new popular patent court, but the speculations do draw attention to an underlying question: did the Supreme Court adequately address forum shopping in patent infringement suits?  While narrowing the definition of proper venue does force plaintiffs to be more careful in selecting a district court, it does not directly address the reason why forum shopping has become an issue to begin with.  Many point to the bourgeoning patent docket in the Eastern District of Texas as a symptom of the growing problem of non-practicing entities, often referred to as “patent trolls.”  Indeed, the TC Heartland decision has been lauded as a victory against patent trolls, leading to abandoned congressional efforts toward patent litigation reform.  But does TC Heartland actually address the problem?  This remains an open question.

As district courts have begun implementing it, the Supreme Court’s TC Heartland decision has left both legal and practical questions.  As the district courts and Federal Circuit look for answers, these three questions – whether improper venue was “available,” what constitutes “regular and established business,” and where new patent cases will be brought – will define the landscape of patent litigation in light of TC Heartland.

Jennifer Tempesta is a Partner at Baker Botts, in their New York Office. Her practice focuses on patent litigation. She has significant experience with all phases of district court litigation in various [...see more]