The devil horns have become a generic sign that people recognize mainly as representing “rock on.” 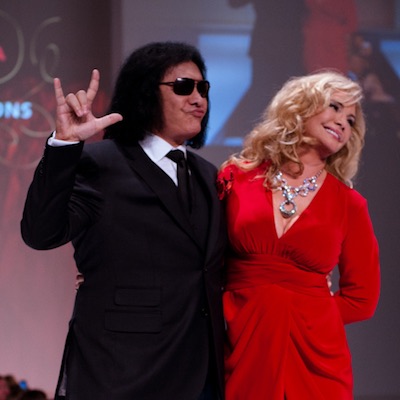 Earlier this month, Kiss frontman Gene Simmons filed to trademark the ‘Devil Horns’ hand gesture, but this unusual application was soon after abandoned. The application listed the date of first use as November 14, 1974, and the specimen of use was a photograph of Simmons flashing the hand gesture alongside Foo Fighters’ Dave Grohl.

Just two weeks later, Simmons reconsidered if he had valid trademark rights to the hand gesture, as he abandoned the application with the United States Patent and Trademark Office. His application caused criticism from fellow musicians who saw the application as a shameless overreach by Simmons as he is one of the most successful musician-entrepreneurs in history.

“This may well have just have been a publicity stunt – and a successful one at that! For just a few hundred dollars, Simmons has gotten an incredible amount of press about this filing already,” said National Trademark Expert Catherine Farrelly of the NYC-based Frankfurt Kurnit Klein & Selz, who sat down with IPWatchdog to talk about the trademark and why she thinks the application would not be accepted. Even before the decision against accepting Simmons’s application came out, Farrelly did not think he would win.

This recent application shows Simmons’s effort to establish that he is the only musical artist in the U.S. who is allowed to use that gesture for live appearances. Although he thinks this gesture is closely associated with himself, that it has become his personal trademark, rock stars have been using this symbol for ages. Through widespread use, it has actually become a generic sign that people recognize as meaning “rock on,” among other things. In fact, according to Ronnie James Dio, who originally popularized the devil horns symbol when he was with Black Sabbath, the hand gesture is a sign to ward off evil.

“The withdrawal of the application is a smart move on Simmons’s part. The application was doomed for failure for numerous reasons – including because his evidence of use did not actually show the trademark (Simmons used the wrong hand in the photograph)!” explained Farrelly. “In addition, the evidence of use did not show any relationship between the gesture and the services listed in the registration, and I expect the application also would have been refused on the basis that the gesture is a generic symbol that does not function as a trademark, given its widespread use by other musical artists.”

Farrelly stated that she expected this trademark would be rejected for a few different reasons. First, the drawing of the trademark in the application is clearly of a gesture made with the right hand. However, that is not the gesture shown in the photo, as Simmons is using his left hand in the photo, so the photo does not depict the gesture that Simmons claims is his trademark. Second, Simmons does not appear to be using the gesture as a trademark, i.e. to signal to customers the source of goods and services. The application only covers the gesture in relation to entertainment like live performances by a musical artist. Given that Dave Grohl is also in the photo, it looks like a party photo of two musicians standing next to one another, in which one is making a “rock on” or “devil’s horn” gesture. Third, the symbol is generic, finding that it has been used by so many musicians throughout the years that it is no longer capable of functioning as a trademark and designating a source.

To date, there have been many other hand gestures like this trademarked. In fact, the University of Texas owns a federal registration for the Hook ‘Em Horns symbol for “decals, decorative decals for vehicle windows, stickers; shirts; t-shirts.” But in this example, the symbol is actually used on the goods. However, the University of Texas did not rely on a photo of a person making the symbol as its evidence of use like Simmons did.

It comes down to the fact that today’s trademark law clearly states that generic terms cannot be protected as trademarks because they cannot identify source – which is the fundamental purpose of a trademark, per Farrelly. By filing the application, Simmons claimed that his use of the devil’s horns gesture tells consumers that he is the source of a concert or a public appearance.

“This is an absurd position,” she said. “For decades, rock fans have seen countless other musicians make that symbol.  No one views it as identifying source – it just means ‘rock on.’ No one seeing another musician make that symbol during a concert is going to mistakenly believe that the band is affiliated with Gene Simmons as a result. The gesture is ubiquitous in the rock world.”