The PTAB Killing Fields: VirnetX patents worth more than $1 billion in district court lost at PTAB 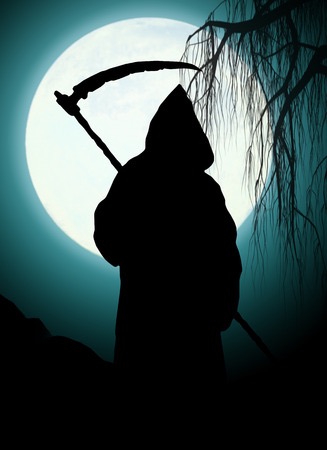 Recently, we raised the question as to whether or not 90 percent of patents which are being challenged at the Patent Trial and Appeal Board (PTAB) are being found defective once trial proceedings have concluded. There are those individuals who vigorously defend the workings of the PTAB as an administrative body, pointing towards statistics on denial of institution or trial settlements in order to deflect any viewpoint that the PTAB is mowing down patents at an unusually high rate. There is also a pervasive viewpoint that the patents being challenged are weak patents that deserve to be declared invalid.

Nevada-based tech licensing company VirnetX Holding Corporation (NYSEMKT:VHC) is a good case in point when trying to ascertain whether the PTAB is doing a virtuous job of cleaning up the U.S. patent system and invalidating weak patents. VirnetX has brought eight patent infringement proceedings to U.S. district court, specifically the Eastern District of Texas. Three suits have been filed against Microsoft Corporation (NASDAQ:MSFT), four against Apple Inc. (NASDAQ:AAPL) and one suit has been filed against Canadian telecom firm Mitel Networks Corporation (NASDAQ:MITL). The cases have been filed between February 2007 and August 2013; three of the actions filed against Apple remain open. 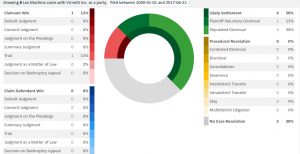 Data pulled from Lex Machina shows that VirnetX has been fairly successful at asserting its intellectual property in district court. Case resolutions show that VirnetX has achieved a claimant win in one case and four other cases have terminated with likely settlements; one of those settlements was a plaintiff voluntary dismissal in one of the Apple cases, which was filed after the patent at issue was added to one of the other district court proceedings against Apple. These cases ended up being very valuable to VirnetX, at least 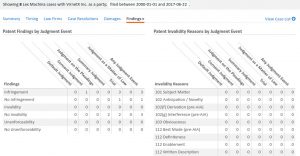 VirnetX also proved willful infringement of the asserted patents in that case, entering a reasonable royalty award of $625.33 million for infringement posed by Apple’s FaceTime and iMessage services as well as virtual private network (VPN) features. Analysis shows that all of the VirnetX patents asserted in district court survived every single challenge of invalidity; not a single patent claim was declared invalid under Section 101, Section 102 or Section 103 statutes and findings of no invalidity are also reflected in the Microsoft jury verdicts.

Obviously, the patents asserted by VirnetX were considered to be both valid and of great value, at least in a federal district court. In the Apple case, the jury found infringement of the following patents:

Not only have VirnetX’s patents earned them large awards of reasonable royalties at the district court level, they’ve also survived patent validity challenges at the U.S. Court of Appeals for the Federal Circuit. Although the Federal Circuit vacated and remanded a district court damages award for VirnetX in September 2014 in VirnetX, Inc. v. Cisco Systems, Inc., an action arising out of one of the Apple cases, it “affirm[ed] the jury’s findings that none of the asserted claims are invalid and that many of the asserted claims of the ‘135 and ‘151 patents are infringed by Apple’s VPN On Demand product.”

So obviously the patent claims VirnetX has used to pursue infringers such as Apple and Microsoft are not the weak patents that opponents of the patent system claim are the scourge of the system. Well — not so fast! Just because an Article III federal district court confirms the validity of a patent doesn’t mean anything anymore. Indeed, federal courts have become subordinate to the PTAB, which is as ridiculous as it sounds but sadly true. A patent is not valid until an Article I executive tribunal says so, and absolutely no deference is paid to Article III judges of the United States federal courts. 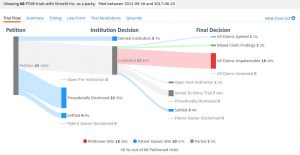 Indeed, from June 2013 through November 2016, VirnetX faced a barrage of 68 inter partes review (IPR) challenges at the PTAB. Apple is listed as a petitioner on 42 of those IPR petitions. Other parties filing petitions include Microsoft, RPX Corporation, Black Swamp IP, LLC, and The Mangrove Partners Master Fund, Ltd. Only one of those petitions resulted in a final written decision finding all claims patentable. 18 final written decisions found that all claims were unpatentable. 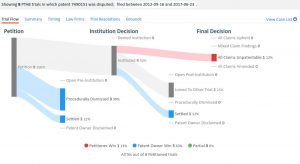 It appears that the patents that have been adjudicated to be worth hundreds of millions of dollars in district court were the ones targeted most heavily at the PTAB. The ‘151 patent, the validity of which was specifically affirmed by the Federal Circuit, was targeted by 8 IPR petitions at the PTAB. Two petitions resulted in settlements, one of which was post-institution, three others were procedurally dismissed prior to institution and one other petition was 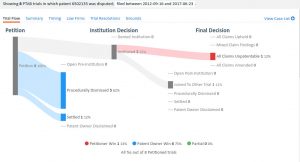 instituted, leading to a final written decision of all claims unpatentable. This invalidated claims 1, 2, 6 through 8 and 12 through 14 of the ‘151 patent as anticipated by a combination of prior art. Similar fates befell the ‘135 patent, the other patent whose validity was affirmed by the Fed. Cir., as well as the ‘504 and the ‘211 patents. 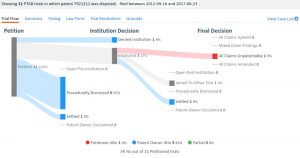 that had been asserted against Apple. The same day of that decision, VirnetX released a press release noting that three Federal Circuit decisions upheld PTAB invalidity findings. One could be forgiven for thinking that the Federal Circuit was acting somewhat capriciously in determining whether or not VirnetX’s patents cover eligible subject matter, given the fact that the court has affirmed lower court decisions that reached wildly different conclusions on validity.

There’s been a great deal of discussion in recent years on whether the PTAB is a death squad for commercially viable patents. At least in the case of VirnetX, this definitely appears to be the case. The “patent as piñata” metaphor also seems fitting in this case. It’s as if Apple, Microsoft, RPX and others are children sitting at a birthday party, each of them getting a turn to take a crack at the VirnetX piñata (Apple getting the most cracks because, let’s remember, this is Apple’s party at the end of the day). Those patents which were so valid and valuable in district court proceedings are simply mounds of papier-mâché at the PTAB, cracking every time with enough swings of the bat.

The PTAB has always been touted as an alternative venue to U.S. district courts, which would lower the costs of fighting patent infringement cases. Increasingly, however, the PTAB does not lower the cost of patent infringement litigation but instead increases the cost in many situations, such as here where these patents had already thoroughly been litigated and even confirmed valid all the way up to the Federal Circuit.

The PTAB gives efficient infringers a great alternative, which can be used to extricate themselves from jury verdicts awarding hundreds of millions of dollars in reasonable royalties. Of course, the inverse is true for VirnetX, which had to deal with the costs of almost 70 PTAB proceedings sprung from 8 district court cases and saw incredibly valuable and previously confirmed valid property rights ripped away.

It’s clear that the PTAB is far more useful for massive entities who are found to have willfully infringed valid patents and highly detrimental to firms who are working to commercialize the inventions of individuals and small entities.