Andrei Iancu: The man who may be the next USPTO Director 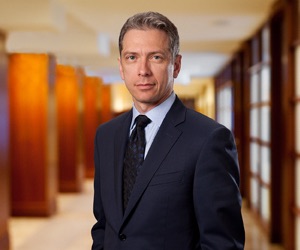 If the Washington, DC rumor mill is correct Commerce Secretary Wilbur Ross will soon announce that Andrei Iancu will be the next Under Secretary of Commerce for Intellectual Property and Director of the United States Patent and Trademark Office. Sources say an announcement could come as early as the beginning of July. Still, it has been difficult to determine whether those within the rumor mill, which have been in complete agreement on Iancu being the pick, is well informed or simply echoing what everyone else is saying. Regardless, at this point too many indicators are pointing toward Iancu being the pick, with rumors also circulating that he is currently being vetted by the Federal Bureau of Investigation (FBI).

Of course, the Trump Administration has been rather unpredictable so what seems like a “done deal” today could well be undone tomorrow. Having said that, at the very least Iancu is at or near the top of a very small short list for the position of Director of the USPTO. It also seems likely that he is not a particularly well known personality within the broader patent community. Certainly, Iancu not as well known as some of the other higher profile candidates who were reportedly under consideration for the position. With this in mind we thought it might be useful to offer this profile of Andrei Iancu, the man who may soon be named as the next USPTO Director.

Andrei Iancu would come to the agency after most recently serving as the managing partner of Irell & Manella LLP, practicing full time with the firm’s litigation and intellectual property practice groups. According to his firm profile, Iancu’s practice with the firm focused upon intellectual property litigation, but has involved himself with all aspects of intellectual property practice, including patent and trademark prosecution, due diligence and licensing. He has represented clients in technological fields including genetic testing, the Internet, medical devices, therapeutics, telephony, TV broadcasting, video game systems and computer peripherals. In addition to his legal practice, Iancu co-teaches an advanced patent class at UCLA School of Law, where he serves as an adjunct professor.

Iancu has received recognition for his legal work since 2007, when Chambers USA first named him as a leading individual in the area of intellectual property and patent law; his bio states he has received that distinction every year since. Since 2011, Iancu has been listed by Intellectual Asset Management (IAM) as among California’s top patent litigators in its annual IAM Patent 1000 report. Similar distinctions have been proffered since  at least 2010 by the Los Angeles-San Francisco Daily Journal, Managing Intellectual Property and The Best Lawyers in America. In 2016, Iancu was named Lawyer of the Year for firms with 75 to 125 attorneys by the Los Angeles Business Journal. This year, he was recognized as one of BTI’s Client Service All-Stars for exemplary client service by corporate counsel at large organizations.

One of Iancu’s major successes during his practice as an intellectual property litigator was his work in securing large settlements for American tech company TiVo Corporation (NASDAQ:TIVO) in 2012. That year, TiVo secured a $250 million settlement from NYC-based telecommunications giant Verizon (NYSE:VZ). Months before that settlement, Dallas-based telecom firm AT&T (NYSE:T) agreed to a $215 settlement to end litigation surrounding digital video recording technology. Iancu’s bio states that total payments to TiVo from these settlements and others from Microsoft (NASDAQ:MSFT), Cisco (NASDAQ:CSCO) and others exceeds $1.6 billion.

The fact that Iancu represented TiVo, a patent owner, against big tech in Silicon Valley will undoubtedly lead to a warm reception in certain patent owner segments of the patent community. Iancu and his firm have a reputation for suing big tech while representing patent owners, and he himself also served as counsel for San Jose-based touch feedback tech firm Immersion Corporation in a patent infringement suit against Japanese tech conglomerate Sony Corporation (NYSE:SNE) involving video game controller patents which ended up netting $150 million for Immersion in March 2007.

On the other side of the coin, Iancu’s work in the biotechnology sector will undoubtedly lead to a cold, if not hostile reception should be be named the next Director of the USPTO. Iancu represented Ariosa Diagnostics in patent litigation against Sequenom, the patent owner. The discovery at the heart of the innovation patented by Sequenom resulted in a test for detecting fetal genetic conditions in early pregnancy that avoided dangerous, invasive techniques that are potentially harmful to both the mother and the fetus. The invention, which became embodied in U.S. Patent No. 6,258,540, claimed certain methods of using cffDNA. The patent taught technicians to take a maternal blood sample, keep the non-cellular portion (which was “previously discarded as medical waste”), amplify the genetic material that only they had discovered was present, and identify paternally inherited sequences as a means of distinguishing fetal and maternal DNA. The claimed method does not preempt other demonstrated uses of cffDNA. The Federal Circuit concluded that the discovery  was “a significant contribution to the medical field,” but that did not matter insofar are patent eligibility was concerned.

According to data which we’ve collected through Lex Machina, Iancu has served as an attorney in 63 intellectual property cases at U.S. district courts, 60 of which were patent infringement cases. Iancu was most active as patent counsel in 2011 and 2012. Despite the aforementioned notable wins Iancu helped to secure on behalf of patent owners asserting their patents, Iancu

actually has more experience as defense counsel, representing plaintiffs in 18 cases and defendants in 40 cases. Iancu has actually served as an attorney in seven trials at the Patent Trial and Appeal Board, representing either petitioners and patent owners in those cases.

Iancu was appointed to the managing partner position at Irell & Manella in 2012 and since that time the firm has been notable for achieving high levels of revenue per lawyer. During the 2015 fiscal year, the firm’s revenue per lawyer reached $1.59 million. In an interview on the subject with Forbes, Iancu credited the intense lawyer training at Irell & Manella including handing over responsibility and autonomy to recent hires early in their tenure at the firm. Although many firms with lower revenue per lawyer numbers were very excellent firms to Iancu, he did speak to ways that firms could improve those numbers if they so desired:

“I would begin with focusing the practice on areas where you know that you can deliver consistent excellence. You don’t have to be everything to everybody. And from there, there’s really no shortcut. You have to do what I mentioned in your first question, which is to bring in the highest quality lawyers and then set them free to grow their practices and trust that they will. And in general, they will.” – Andrei Iancu, Forbes interview dated 3/29/17

Along with being a managing partner of a law firm with an intellectual property focus, Iancu has also appeared as an author on several papers regarding the patentability of software claims, a subject of much debate over the past two decades. In February 2008, the Journal of the Patent and Trademark Office Society published a paper co-authored by Iancu titled “Code on Disks and Hat Tricks – Is Computer Software on a Medium Really Patentable?” The paper notes that software has been “the black sheep of the patent family” even as it “plays a major part in the modern world and our present economy.” Looking at Supreme Court precedent as well as recent case law, the paper concluded that Beauregard claims could meet patentability requirements under Section 101 even if many claims might not meet novelty or obviousness requirements under other statutes.

Iancu is also listed as the lead author of an article published in the Spring 2010 issue of the Northwestern Journal of Technology and Intellectual Property under the title “Machines and Transformations: The Past, Present, and Future Patentability of Software”. The paper looked at the the effectiveness of the machine-or-transformation test to determine patent-eligible subject matter in light of oral arguments made before the Supreme Court in Bilski v. Kappos; the case would be decided months later.

“Unfortunately, the test may well be throwing out the baby with the bathwater. Whatever the merits of various arguments regarding the patentability of business methods, the patentability of software processes, which are at the heart of innovation in our Information Age, at least deserves separate consideration.”

Iancu would also bring the perspective of a former engineer to the USPTO, having worked with Hughes Aircraft Company prior to joining law school. During his time with that company Iancu received several awards, including the Malcolm R. Currie Innovation Award. Iancu earned his bachelor’s degree in 1989 in aerospace engineering from UCLA. He received his master’s degree in mechanical engineering from UCLA in 1990 and graduated from the UCLA School of Law with his J.D. in 1996. While at UCLA School of Law, Iancu was a member of the Order of the Coif and received the Melville B. Nimmer Copyright Award.