Where is the Federal Circuit on Aqua Products? 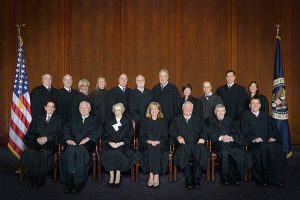 The judges of the Federal Circuit as of 2016. Public domain.

Last December, the U.S. Court of Appeals for the Federal Circuit (Fed. Cir.) held an en banc rehearing of the In re: Aqua Products case, which questions whether a patent owner or a petitioner holds the burden of proving patentability of proposed amended claims during an inter partes review (IPR) proceeding at the Patent Trial and Appeal Board (PTAB).

More than six months have passed since the en banc rehearing in Aqua Products without a decision from the Federal Circuit. It could be an indication that the court is working on handing down a ruling that would greatly alter PTAB practices relating to motions to amend. In the alternative, it could be an indication that there’s a split in opinion and Federal Circuit is still making up its mind on the matter with multiple separate opinions being prepared and circulated. Interestingly, an article on In re: Aqua Products published last August by The National Law Review noted that, in its decision to grant Aqua’s petition for en banc rehearing, the Federal Circuit asked an additional question of law: who holds the burden for persuading PTAB or producing evidence to challenge the patentability of claims amended by a patent owner. That by itself could be an indication that Federal Circuit is interested in ruling in favor of patent owners in this case.

“Seven months seems a pretty long time to keep so many patentees who would want to amend in limbo, especially as dynamic as the PTAB is,” said Todd Dickinson, former Director of the USPTO and current Senior Partner with Polsinelli. “On the other hand, some may be feeling they need to ‘write the new rule’ if they strike the old one, and it is likely to be more difficult to get consensus on that.”

Aqua Products, the owner of a patent covering an automated swimming pool cleaner, found its patent challenged at the PTAB. Aqua filed a motion to substitute claims but the PTAB denied that petition on the grounds that Aqua hadn’t proven patentability of the substituted claims over the prior art. Aqua appealed the case to the Federal Circuit, questioning the PTAB’s interpretation of the statute governing motions to amend claims.

The conduct of IPR proceedings is governed by 35 U.S.C. §316 and subsection (d) covers amendment of the patent challenged in the IPR. It gives patent owners a single opportunity to amend claims in an IPR proceeding for one of two reasons. §316(d) says:

During an inter partes review instituted under this chapter, the patent owner may file 1 motion to amend the patent in 1 or more of the following ways:

(A) Cancel any challenged patent claim.
(B) For each challenged claim, propose a reasonable number of substitute claims.

Those familiar with the way the PTAB interprets §316(d) know that the PTAB believes that the statute merely provides a right to file a motion to amend and not necessarily a right to amend an application. Rather than reading the “may” as a discretionary choice bestowed upon the patent owner who may at their choice amend or not, the PTAB believes the word “may” means that they can refuse to allow an amendment even for one of the two specifically enumerated categories of amendment identified in §316(d). Surprisingly, up until now the Federal Circuit has ratified this rather peculiar interpretation of §316(d), although In re Aqua Products could well change this status quo.

Specifically relating to Aqua’s situations, the PTAB’s dismissal the Aqua motion because the Board views patent owners as being ultimately required to prove the patentability of any subject matter submitted as a substitute claim during a motion to amend. Aqua argues that Section 316(e), governing evidentiary standards, gives the burden of proving the unpatentability of claims on the petitioner but in effect the PTAB has shifted that burden onto the patent owner, limiting the effectiveness of motions to amend. The en banc rehearing came about a half-year after the Federal Circuit affirmed the PTAB’s decision last May.

During the debates leading up to passage of the America Invents Act (AIA), which is the legislation that created the post grant challenge procedures including inter partes review, motions to amend were sold as a tool patent owners could use to salvage their patents or work collaboratively with petitioners to create better drafted claims. Indeed, Section 316(d)(2) provides for the additional filing of motions to amend at the joint request of the patent owner and the petitioner for the settlement of an IPR proceeding. Contemporaneous statements by Members of Congress during the AIA debates, and within the legislative history, repeatedly sought to calm concerned patent owners by explaining that no one was looking to take patent rights away, but rather just wanted to make sure the patents that were granted should have been granted. But the much different and In re: Aqua Product is but one example.

Some interesting data points are raised in an article published by Law360 on the burden of proof at the PTAB, which mentions In re: Aqua Products. One early chart in the article shows that the Federal Circuit has increasingly found it necessary to reverse or vacate decisions of the PTAB; the Federal Circuit handed down 21 such decisions in September 2016. Since June 2015, the percentage of Federal Circuit decisions with written opinions that have vacated or remanded PTAB decisions has risen to 17 percent. Further, the Law360 article also has a graph showing a significant decline in the fraction of PTAB proceedings in which a motion to amend was filed. More than 40 percent of proceedings included a filed motion to amend in fiscal year 2013, but that dropped to just over 15 percent in FY2014 and less than 5 percent in FY2016. The data looks as though a great number of patent owners used motions to amend early on but those motions fell out of favor as patent owners received the message that the PTAB would not grant them and the Federal Circuit was not going to force the PTAB to grant motions to amend as contemplated by the statute.