How and Why LinkedIn Learned to Love Patents 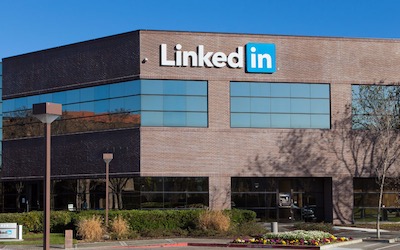 In 2012, LinkedIn found itself a potential target for corporate patent asserters. LinkedIn had revenue reaching nearly $1 billion, with growth of 86%, yet owned only 22 patents. However, this changed fundamentally from 2012 to mid-2016, when LinkedIn grew its organic portfolio from 36 to over 1,000 patent assets and purchased more than 900, dramatically reducing its risk profile.

Corporate-to-corporate patent assertion remains a significant threat for companies, in spite of patent reform and a series of US Supreme Court decisions which have been negative for patent holders. For the past 10 years, non-practicing entities (NPEs) – sometimes referred to derisively as patent trolls – have gained media attention because of the cost of and legitimate moral outrage over some of their practices. Corporate patent assertions tend to be more dangerous and more expensive than NPE activity and involve a broader category of business solutions. Instances of corporate patent assertions abound: examples include those involving IBM, Qualcomm, British Telecom, Alcatel-Lucent and more recently BlackBerry, all of which have patent licensing teams. A critical element to successfully defending yourself against such assertions is to have a viable counter-assertion patent portfolio. However, this is something that many fast-growing start-ups lack.

Start-ups are the driving force behind many technological advancements and, understandably, tend to focus on building a product and validating a business model. Because of this, patent filing rates for start-ups in the high-tech market (eg, cloud computing, semiconductors, mobile and networking) are seldom commensurate with their inventions and future needs, especially when compared to those of large established companies – typically, start-ups file a few patent applications in core technology areas only. But what happens when a start-up becomes successful? Combining a high-growth start-up with a successful initial public offering and a small patent portfolio can make it a target for patent assertions from other companies. Established companies can face similar problems when entering an area in which they have not traditionally filed patents or expanding into international markets (eg, a Chinese company entering the US and European markets).

This article focuses primarily on high-tech companies which are vulnerable to patent assertions from operating companies, as opposed to NPEs. LinkedIn provides an example of how a company can proactively meet this challenge following its creation of a strategy which combines organic patent filings and patent acquisitions, and which has enabled it to quickly grow its patent portfolio and reduce much of the risk of assertions from existing companies.

The risk of assertion to LinkedIn comes from operating companies in its direct market ecosystem, those in the extended ecosystem and large corporate patent asserters with large patent portfolios. The market ecosystem includes direct competitors, as well as all of the companies with which LinkedIn works. Each of these operates in a technology space similar to that of LinkedIn and therefore may have patents which could affect its revenue. Because of close business relationships, the vast majority of these companies pose little patent risk – disputes rarely arise because both companies have vested business relationships with one another and with other members of the ecosystem. LinkedIn also benefits from an open source culture and participation in that community – patent disputes tend to occur far less frequently in open source projects.

However, each of these companies has its own ecosystem of competitors and other companies with which it works, thereby extending the ecosystem. The further removed companies are from LinkedIn, the less technology overlap there is and the lower the risk that a company will have patents which could be asserted against LinkedIn. The exception to this rule is large corporate asserters. These can be found almost anywhere in an ecosystem and have large patent portfolios, as well as a history of assertion (for a more detailed analysis on the patent ecosystem and determining the risk from each company, see “The strategic counter-assertion model for patent portfolio RoI”, *IAM* issue 72). 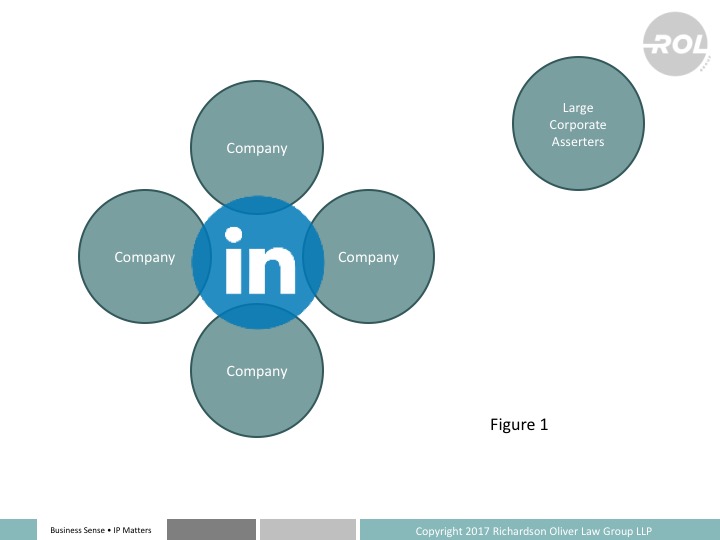 An operating company (Company A) may choose to assert a patent against LinkedIn with one or more of the following goals:

In a typical high-tech assertion between Company A and LinkedIn, Company A would be asserting primarily to achieve some combination of the first and second goals above, although it might also seek to achieve the third goal as a possible added benefit. To accomplish this, it would allege that LinkedIn’s products are infringing on its patents, showing the affected revenue (ie, how much money LinkedIn is making from the allegedly infringing products).

How to deter patent asserters through counter-assertion

When it comes to patent assertions, the best defense is a good offense. Most high-tech patent disputes are handled under a Cold War-style détente strategy: sue me for patent infringement and I will sue you back.

While there are some high-profile exceptions, such as cases between Apple Inc and Samsung Electronics Co Ltd, usually the prospect of escalating litigation over cross-infringement complaints creates a stable environment in which companies tend to leave each other alone. For example, Juniper Networks, Inc and Cisco Systems, Inc have never sued one another for patent infringement despite operating in technology areas so similar that they have been co-defendants in patent assertions (eg, TXED 6-09-cv-00324 and TXED 2-08-cv-00304). A robust patent portfolio is critical to mitigating corporate assertion risk. Like a Cold War arms race, simply having a large portfolio can be sufficient deterrent against assertion.

In addition, LinkedIn’s culture – as well as that of many Silicon Valley companies – tends to focus competition on product success, rather than mere patents. However, there are exceptions. For example, when companies begin to fall behind their competitors or a single company in a new technology space decides to aggressively enforce its patents, the détente begins to fail. 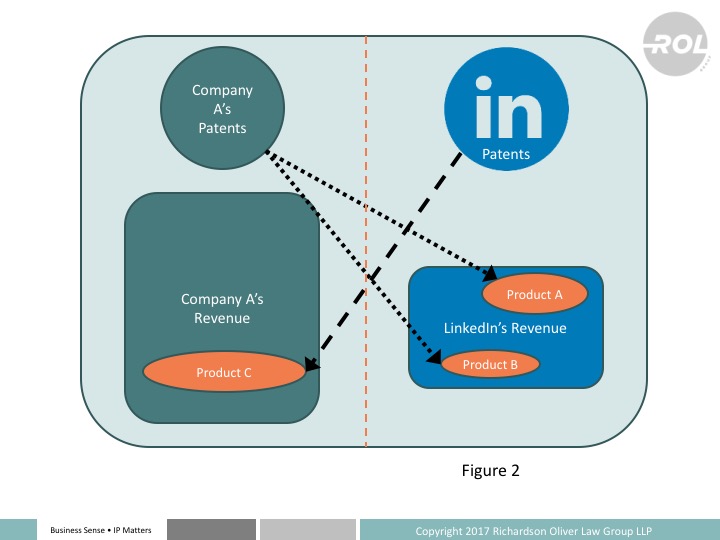 Returning to the Company A example, LinkedIn would deal with its allegations by counter-asserting (see Figure 2), highlighting which of Company A products and services infringe its own patents. Where Company A’s infringing products generate large revenue, LinkedIn would be in a stronger negotiating position.

The challenge for LinkedIn is to have a patent portfolio that is sufficiently large and diverse to ensure that it can find patents that Company A – and any other company that poses a high risk of asserting – might be infringing. Just as a large portfolio acts as a deterrent, a small portfolio demonstrates vulnerability. At the end of 2012, LinkedIn needed not only to start filing at an increased rate, but also to address its patent deficit through acquisitions – a practice known as ‘backfilling’.

So how did LinkedIn increase its patent filings? In part 2 of our series, we examine LinkedIn’s patent strategy in further detail.