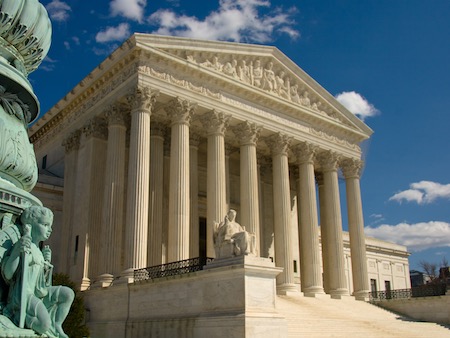 Earlier this morning the United States Supreme Court issued an opinion in Impression Products, Inc. v. Lexmark International, Inc., a case requiring the Court to revisit the patent exhaustion doctrine. In an opinion authored by Chief Justice John Roberts, and joined by all members of the Court except Justice Ginsburg (concurring in part and dissenting in part) and Justice Gorsuch (taking no part in the case), the Supreme Court determined that when a patent owner sells a product the sale exhausted patent rights in the item being sold regardless of any restrictions the patentee attempts to impose on the location of the sale. In other words, a sale of a patented product exhausts all rights — both domestic and international.

Background of the Dispute

At the foundation of the dispute between Impression Products and Lexamark is the toner that laser printers use to make an image appear on printed page. Lexmark designs, manufactures, and sells toner cartridges to consumers in the United States and around the globe. It owns a number of patents covering components of those cartridges and the manner in which they are used.  When toner cartridges run out of toner they can be refilled and used again. This creates an opportunity for other companies to acquire empty Lexmark cartridges from purchasers in the United States and abroad, refill them with toner, and then resell them at a lower price.

In an attempt to prevent the cannibalization that naturally occurs from cheaper refilled toner cartridges, Lexmark structures sales so as to encourages customers to return spent cartridges. It gives purchasers two options: One is to buy a toner cartridge at full price, with no strings attached. The other is to buy a cartridge at roughly 20-percent off through Lexmark’s “Return Program.” A customer who buys through the Return Program still owns the cartridge but, in exchange for the lower price, signs a contract agreeing to use it only once and to refrain from transferring the empty cartridge to anyone but Lexmark. To enforce this single-use/no-resale restriction, Lexmark installs a microchip on each Return Program cartridge that prevents reuse.

Over time the resellers adapted, becoming more clever. They kept acquiring empty cartridges as they could, and developed ways around the microchip installed by Lexmark. This prompted Lexmark to use a number of the resellers, including Impression Products.

What the Federal Circuit Got Wrong

This decision of the Supreme Court once again overruled the Federal Circuit ruling below, which concluded the Lexmark had not exhausted patent rights, and that they could sue for infringement when Impression Products refurbished and resold Return Program cartridges, which were cartridges sold with microchip protection to prevent their subsequent reuse. The Federal Circuit also ruled that the sale of a product abroad did not terminate the patent owner’s ability to bring an infringement suit against a buyer that imported the article and sold it in the United States.

The Supreme Court would explain that the Federal Circuit managed to get this case so wrong because it logically “got off on the wrong foot.” The Federal Circuit believed that to properly interpret the exhaustion doctrine it was necessary to interpret the infringement statute, which at first seems a rather logical thing to do since the infringement aspects of the Patent Act would seem applicable in determining whether one could maintain a patent infringement action. However, according to the Supreme Court, the patent owners right to use, sell, and import all exist independently of the Patent Act because the patent only grants the limited right to prevent others from engaging in those activities. Therefore, the Supreme Court explained, if one transfers those rights that are not derived from the Patent Act the buyer and subsequent buyers are free and clear of infringement lawsuits because there is no exclusionary right left to enforce.

The basis of the patent exhaustion doctrine is when a patent owner sells a patented product the patent owner can no longer control that item through the patent laws — its patent rights are said to have become exhausted. The purchaser and all subsequent owners are free to use or resell the product just like any other item of personal property, without fear of an infringement lawsuit.

The two questions about the scope of the patent exhaustion doctrine that were presented in Impression Products v. Lexmark, were: (1) Whether a patentee that sells an item under an express restriction on the purchaser’s right to reuse or resell the product may enforce that restriction through an infringement lawsuit; and (2) Whether a patentee exhausts its patent rights by selling its product outside the United States, where American patent laws do not apply.

With respect to the first, relating to the Return Program cartridges, the Supreme Court concluded that Lexmark exhausted its patent rights in those cartridges the moment it sold them. The Court further observed that while the singe-use and no-resale restrictions may be perfectly clear and enforceable under contract law principles, they do not entitle Lexmark to retain patent rights in an item it has elected to sell. Once a patent owner sells an item it has enjoyed the rights secured by the limited monopoly[1] provided by the patent, the Court explained citing to Keeler v. Standard Folding Bed Co., 157 U. S. 659, 661 (1895).

With respect to the second issue relating to international exhaustion, the Supreme Court relied on Kirtsaeng v. John Wiley & Sons, Inc., which held that the first sale doctrine applies to copies of a copyrighted work lawfully made and sold abroad. The Court explained that although the Patent Act does not have a first sale doctrine the application of the same principles are no less direct because the basis of patent exhaustion is an “antipathy toward restraints on alienation, and nothing in the text or history of the Patent Act shows that Congress intended to confine that borderless common law principle to domestic sales.”

Notably, the Supreme Court rejected the Government’s international exhaustion compromise, which would have been to recognize that a foreign sale exhausts patent rights unless those rights are expressly reserved. The Supreme Court found this to be nothing more than public policy, focusing on the expectations between buyer and seller rather than on the transfer of patent rights as required by the patent exhaustion doctrine. Of course, what the Supreme Court failed to take into consideration is the impact this decision will have on grey market goods (particularly with respect to pharmaceuticals), which very well could require Congress to take action to overrule or at least limit the international patent exhaustion aspects of this ruling.

Justice Ginsburg concurred with respect to the Court’s ruling relating to the first issue pertaining to domestic patent exhaustion, but dissented relating to the issue of international exhaustion. Ginsburg would have ruled that a foreign sale does not exhaust a U.S. inventor’s U.S. patent rights.

Because patent law is territorial, and because a sale abroad operates independently of the U.S. patent system, Ginsburg wrote that “it makes little sense to say that such a sale exhausts an inventor’s U.S. patent rights.”

Ginsburg was also not persuaded by the Court’s reliance on Kirtsaeng, saying that although there is a historical link between patent and copyright law, “[t]he Patent Act contains no analogue to 17 U.S.C. §109(a), the Copyright Act first-sale provision analyzed in Kirtsaeng. More importantly, copyright protections, unlike patent protections, are harmonized across countries.”

[1] Of course, a patent is not a monopoly no matter how many times the Supreme Court makes this egregiously erroneous claim. At best, a patent gives one the opportunity to charge monopoly profits if and only if there is a market for the product in question. Furthermore, others are allowed to improve the product and block the original patent owner. Still further, there is no guarantee that a patent will ensure any market interest. Yet, the Supreme Court clings to this ridiculous notion time and time again. For more please see: Debunking the Myth that Patents Create a Monopoly.