“Let’s call patent reform for what it is: a blatant economic and power grab by tech firms to infringe on technology created by others,” Giancarlo said. 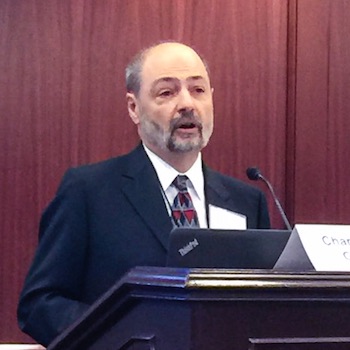 Charles Henry Giancarlo, former Cisco CTO, explained that the patent system specifically envisioned those who do not manufacture being able to license their patents.

The mainstream narrative surrounding the U.S. patent system has been hijacked in recent years by individuals and entities who have sought to weaken a patent owner’s ability to assert patent rights, most notably by labeling any patent owner trying to assert those rights as a “patent troll.” As Sen. Dick Durbin (D-IL) recently noted during a Senate Judiciary Committee hearing on intellectual property as a driver of American innovation that the term “mischaracterize[s] anyone who goes to court to assert patent rights.”

A close look at the false narratives, which have been promulgated throughout the U.S. patent system, was offered at the International IP Commercialization Council’s policy event at the U.S. Capitol on May 8th by Charles Henry Giancarlo, former CTO and chief development officer for Cisco Systems and former managing director at private equity firm Silver Lake Partners. Giancarlo’s presentation also sought to explore the true agenda of those who are involved in the current U.S. patent reform debate.

“Patents are the driving force of U.S. economic expansion,” Giancarlo remarked, citing the high correlation between the growth of developed economies and the strength of patent laws within those jurisdictions. Giancarlo also used figures from political science professor Stephen Haber’s 2016 article Patents and the Wealth of Nations to show that periods of high dynamic economic growth also see large numbers of issued patent grants and patent litigation filings.

Like others at the IIPCC event, Giancarlo spoke about the unique nature of the American patent system as it was developed in its earliest days to be separate from patent systems seen in Europe. Prior to the U.S. system, patents were granted as the rights of sovereigns. It was a truly American innovation to grant patents to individuals and not to companies, which Giancarlo said enabled every single American to engage in innovation, not just a certain class of citizens. Further, the U.S. system allows inventors to assign their inventions to companies, enabling an entire licensing system for patent owners to commercialize their invention as fully as possible.

Yet the conversation about the patent system promoted by larger tech companies has nothing to do with the benefits of this licensing industry and everything to do with trolls which, apparently, exist for the very first time. Those entities decry weak patents, the extraction of tolls through manufacturer suits and entities which don’t practice their own technology themselves. “The proposed solutions don’t even address the false narrative,” Giancarlo said, noting that the higher expense for non-manufacturers to pursue patent infringement claims and investor joinder rules to lift the corporate veil during legal proceedings favor the defendant in most actions.

Much of the false narrative involving patent trolls hinges on the argument that things are different today and that an outsized increase in patent litigation is proof of abuse of the U.S. patent system. Historical data provided by Giancarlo, however, showed that, from 1790 through 2000, the rate of patent litigation as a percentage of total patents granted hit a low of about 0.5 percent in 1860 and has remained around that level ever since. High-profile patent wars are also not a new phenomenon, Giancarlo noted, pointing out that many treasured American inventors like Thomas Edison, Charles Goodyear and the Wright Brothers would likely be seen as trolls today for their licensing and litigation activities. “High levels of patent caseloads and trials occur during periods of intense economic and technology development,” Giancarlo said, later adding that high rates of patent litigation were also seen during the heyday of the telegraph and telephone systems.

Further discussion of the revenues of non-practicing entities (NPEs) and patent assertion entities (PAEs), the two types of entities which are often labeled as trolls, showed that the revenues of these companies were small enough to beg the question as to why such comprehensive reform measures were required in order to rein in these entities. The high tech industry contributes about $1 trillion to the overall U.S. economy. The revenue base of all publicly traded NPEs and PAEs is approximately $7 billion, less than 1 percent of all tech revenues in the U.S.

Other aspects of the patent troll narrative were addressed during Giancarlo’s talk. The contention that trolls are asserting weak patents flies in the face of the fact that weak patents which are asserted are often thrown out early in legal proceedings. Many of those “weak” patents come from the late 1990s and early 2000s, leading Giancarlo to opine that many of those have either expired or been eliminated through validity challenges such as inter partes review (IPR) proceedings available at the Patent Trial and Appeal Board (PTAB). If tech companies actually wanted to prevent patent trolls from shaking down “mom and pop” companies, they had a good chance to do so by supporting the TROL Act of 2015. They didn’t, and Giancarlo had a compelling reason as to why. “It addressed the real problem by targeting shakedown artists, eliminating the narrative they were using to weaken the patent system,” he said.

Many proponents of patent reform point to the economics of mobile phones, which they argue are greatly impacted by suits from trolls, as a way of getting mainstream American consumers more interested in supporting reform. This argument also fails under the weight of hard data presented during Giancarlo’s presentation. Data from a 2015 study on the smartphone industry found that patent licensing only constituted 3.3 percent of the total cost of smartphones to consumers. This low cost percentage flies in the face of any argument that patent owners in the mobile tech space hold monopoly powers within the industry which are greatly inflating the cost of the end product.

The true agenda of those who support further reform of the U.S. patent system is as follows: to discriminate against entities which license technologies instead of manufacture; to increase the costs of asserting patent rights to the detriment of individuals and startups; and to stilt the conversations surrounding tech licensing in favor of the infringer bringing a product to market. “If you trip over our patent, you’re a thief. If we trip over your patent, you’re a troll,” Giancarlo said.

Overall, recent reform efforts has caused a rapid migration to Old World systems of patenting in which patent rights were stronger for companies than for the individual. “Let’s call patent reform for what it is: a blatant economic and power grab by tech firms to infringe on technology created by others,” Giancarlo said, who further noted that the term patent troll was invented at Intel in the late 1990s. In his opinion, the true trolls are the entities trolling Congress to get a competitive advantage over smaller entities.