I Dissent: The Federal Circuit’s ‘Great Dissenter,’ Her Influence on the Patent Dialogue, and Why It Matters 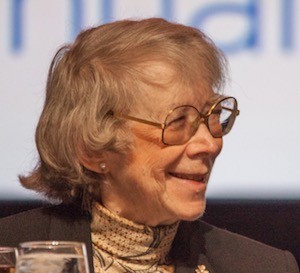 Judge Pauline Newman of the United States Court of Appeals for the Federal Circuit, October 2015 at the AIPLA annual meeting.

Historically, most dissents have not mattered. Those who are concerned with the rules of the road have looked to the majority opinions, which after all are “the law.” Moreover, with the explosion of patent litigation today, there is less time for consideration of dissents even for those interested.

However, this is not to say that dissents should not matter. Judging is an imperfect art. Courts are often under time constraints and must decide cases with little ability to consider the impact of their decisions fully. In some cases, the “correct” ruling might prove particularly elusive.

Even when an issue is fully canvassed and the dissenting judges’ battle for the majority vote is lost, the dissent creates a record of what can be a very important dialogue. That dialogue might lead yesterday’s dissent to become tomorrow’s law.

Over the years, we have come to recognize some of our judges as “great dissenters.” Holmes and Brandeis easily come to the mind. In patent law, there is another candidate for this title.

Judge Pauline Newman has been on the Court of Appeals for the Federal Circuit for over thirty years. For many of those years, she was one of the leaders on the court and in sync with other leaders such as Judge Giles Rich. This was in part aided by the fact that Judge Newman spent thirty years prior to becoming a judge as a patent attorney and played a role in the court’s early formation. She was part of the patent committee of the Domestic Policy Review, formed by President Carter, which reviewed the issue of patent adjudication.

Today, Judge Newman is the Federal Circuit’s most prolific dissenter, and her dissents are important. Former Chief Judge Paul Michel noted that “Judge Newman may hold the record for the most dissents.  But her dissents have great force and often persuade other colleagues over time.” Judge Kimberly Moore concurred, saying “[w]hat people may not realize is that many of her dissents have later gone on to become the law—either the en banc law from our court or spoken on high from the Supremes.” She noted that “Merck v. Integra comes to mind. It’s a case where she wrote a very strong dissent. The Supreme Court took it and not only changed the state of the law to reflect what she had written, but they cited her outright in the opinion.”

According to Judge Newman, “the formalized expression of contrary views is part of a jurisprudential culture, and may advance and clarify the law.” She explained that she dissents when she thinks the majority is wrong without regard to the composition of the panel. She sees her job as a judge as an obligation to reach the right decision and to speak out if that has not been achieved. She is uninterested in leaving a legacy: “My concern is to get things right in the present.”

The group of pioneers that steered the Federal Circuit judges through its formative years attempted to hardwire into its jurisprudence rules that addressed the arbitrary treatment of patents by regional courts of appeal. Those pioneers shared a largely uniform view on the value of patents and the role patent law should play in furthering innovation. Judge Newman’s dissents reveal the consistency and coherence of her judicial philosophy and a sincere commitment to the mission of the Federal Circuit to promote innovation. The same philosophy that adheres strictly to statutory intent also compels her dissents to alert stakeholders when her colleagues have departed from it over the years. As a new generation of judges continues to fill the last seats left by these pioneers, it becomes more important than ever to study the reasoning behind Judge Newman’s dissents, and if necessary, to reconsider the reasoning of the decisions in which those dissents have appeared.

Many of Judge Newman’s dissents concern validity issues, especially on issues of novelty and nonobviousness. Other dissents argue that district courts should be given more discretion than the majority sometimes allows, a view that the Supreme Court has vindicated. Judge Newman has also been concerned about the manner in which the Federal Circuit has, at times, restricted the doctrine of equivalents and expanded the defense of inequitable conduct to the detriment of patentees. In recent years, her dissents have reflected the evolving nature of the court’s docket, including the relationship between the Patent Trial and Appeal Board (PTAB), an administrative tribunal within the United States Patent and Trademark Office (USPTO), and the courts.

Judge Newman dissents most often in cases involving the chemical and biopharma industries. Graduating in 1947 as a double major in chemistry and philosophy, she went on to obtain an M.A. in pure science from Columbia University in 1948. Initially, she sought to be a physician, but changed her mind and enrolled at Yale where she obtained a Ph.D. in physical organic chemistry in 1952.

She corrects the majority on the science, because “[she] believed, as a lawyer in the private sector observing decisions in patent cases, that not all judges understood the ways of technologists, or investors, or the workings of the patent system.” She noted that “there appears to have been a failure of the ‘two cultures’ of law and science to understand each other.” As she stated “[t]oday we cannot afford this gap, for scientific and technologic issues, underlie large segments of modern jurisprudence, as well as of our economy.”

Beyond scientific knowledge, Judge Newman seeks to ensure that the court’s errors do not prejudice the commercialization of patented technology. She noted that “[i]n today’s technology-based commerce, rational economics requires that the patent provides a reliable basis for investment.”

Judge Newman’s dissents have enriched the patent dialogue at the Federal Circuit. A few have succeeded in gaining traction with the Supreme Court, with her colleagues, and with academics. Others are pitched to a key for a future court and a true measure of their influence lies in the hands of history. All have become part of its institutional memory, and they provide a roadmap of the issues where she saw room for course correction. As is fitting, the final words on her dissents are hers:

Our differences of opinion are, I believe, healthy, and necessary. They weigh against the risks of complacency and disaffection envisioned by opponents of the formation of the Federal Circuit . . . I do not profess objectivity in my assessment of the Federal Circuit. I believe that the fears of the opponents have not been realized; and my hopes as a proponent are being met. This alone cautions against complacency. Justice Holmes said that the inevitable comes to pass only through effort. We are committed to that effort.