America’s Patent System: Mediocre and stabilized in a terrible space 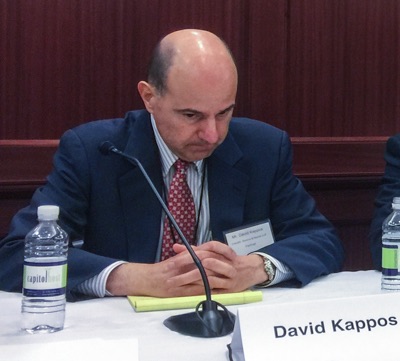 Former USPTO Director David Kappos did not paint a rosy picture of the U.S. patent system.

Yesterday the International IP Commercialization Council (IIPCC) held a one-day symposium at the U.S. Capitol in Washington, D.C. The event titled Promoting Innovation, Investment and Job Growth by Fixing America’s Patent System was well attended by a whose-who of power players within the IP community. The focus of the program was to explore the direct and essential role that strong and enforceable patents play in allowing investors and entrepreneurs to engage in the high-risk business of innovating.

There is much to report from the three excellent panels, all with A+ caliber panelists. We will have much to report in the coming days and weeks, exploring the full gamut of the presentations and numerous points made. For today I will primarily focus on the third and final panel of the day, moderated by Rob Sterne (Sterne Kessler), and which included David Kappos (former USPTO Director), Todd Dickinson (former USPTO Director), Chief Judge Paul Michel (ret.), and Dean John Whealan (former USPTO Solicitor and currently at George Washington University Law School).

Throughout the day the Patent Trial and Appeal Board was a major topic of conversation.

“The results from the Patent Trial and Appeal Board reflect the procedures it applies, and in my judgment the procedures are wildly off base,” Judge Michel explained. “If I had a magic wand I’d make the procedures comply with those from federal court,” Judge Michel said as he ran through a number of things he would change, including the real construction of the claim under the Phillips standard. “Unless you change the PTAB process hook, line and sinker this is what you are going to get… it isn’t that the PTAB is hostile to patents, it is that their processes can’t accomplish anything else.”

Moderator Rob Sterne set up a question for Todd Dickinson relating to the fact that so many people complain of “bad patents” issued dating all the way back to the end of the Clinton Administration. “A lot of people forget patents have a term,” Dickinson explained. “Something like 75% of patent owners don’t pay the third maintenance fee, so most of them expire after 12 years.” In transitioning to discuss what he sees as the real problems facing the patent system today Dickinson said: “We have to stabilize 101, we just have to.”

The stabilization of 101 was another common theme throughout the day, starting with the first panel, which included Manny Schecter (Chief Patent Counsel of IBM), who like Dickinson and so many others believes that something needs to be done about 101. “The courts just don’t have the answer, they’ve proven to us that they are never going to come up with the answer,” Schecter explained during the first panel of the day as he advocated for a legislative fix for patent eligibility.

Returning to the final panel, John Whealan explained that if you look at what has happened with 101 and you look at what has happened with inter partes review (IPR), where the PTO is invalidating roughly two-thirds of all patents, it is sad. “The IPR system is not fair… The PTO doesn’t presume what it does is right,” Whealan explained. “I think you want a front end system that people can rely on at least to a point.” Whealan would go on to say that we need a system that isn’t just a “do over,” a system that gives at least some “credibility” to what was done in the examination process. 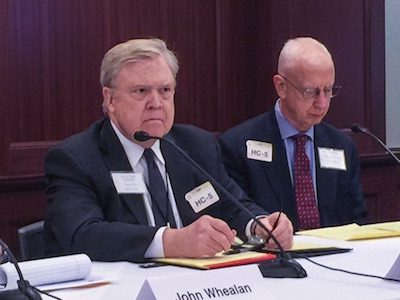 As discussion stayed on the PTAB and in particular the IPR process, Judge Michel pointed out that there are only two fixes that he can see that would require Congressional action: requiring standing and chancing the preponderance standard. Everything else could be changed through regulation. “I think it is astonishing it hasn’t been done two years ago,” Michel said. To this Dickinson pointed out that so far only a single Administration has administered the AIA. A new Director could change at least 50% of the process, Dickinson explained. “So who the next Director is really matters.”

Sterne threw out what was probably supposed to be a red meat question, but which did not turn into such a moment seized by the panelists. Sterne asked if the thumb of Silicon Valley were on the scales? Judge Michel said that he didn’t think it was particularly useful to ascribe blame or motivations. The system is broken and needs to be fixed, we know that and we need to get about fixing the system, period.

“Ascribing motives to people is inherently dangerous… because in the final analysis it doesn’t matter,” Michel said. “We’ve had PTAB final results… whatever the intentions were we don’t have to speculate… we have ample evidence of how it worked in practice. We know it doesn’t work satisfactorily.” Michel went on to explain that we know what needs to be done, and that the changes might need to be done in two or three waves, but that it doesn’t help at this point to attach blame.

Michel would also go on to criticize the PTAB procedures on a substantive level explaining that the goal of the PTAB was to be an alternative to district court litigation, which simply has not happened. “PTAB is not the alternative, they are the prelude.” After going through a litany of the problems with litigating in district court – the expense, the length of time it takes, how harassing it can be – Michel concluded: “After the AIA every one of those ills have gotten worse.”

“One thing that gets forgotten in this discussion is the role of moving the gold posts,” Kappos explained. “It comes back to we need some clarity, consistency and stability for the system. It is also time for the PTO to take time for the next round of improvements.” Kappos explained that the Office knew that they “engineered a system to allow them to get [post grant challenges] done on time…. But now it is time to come back, call it PTAB 2.0.”

“When you have a system that is issuing a thousand patents a day and then you have a system that when it looks at it a second time is invalidating two-thirds of them, and it’s the same system, most industries don’t work that way,” Whealan explained. “This is affecting more than just the [small number of patents reviewed by PTAB], it is affecting the integrity of the system.” Whealan then very succinctly put his finger on the precise problem: “If you take away the presumption [of validity] that is why you are getting the type of results you are getting.”

Judge Michel continued to express astonishment with respect to PTAB statistics. “Since 80% of the IPRs are already in district court, these are patents the owners have already assessed, look strong, whether infringement can be proven, whether the defenses against invalidity can be defended,” Michel explained. “These are presumably the strongest patents… a two-third invalidation rate can’t be right for these pre-vetted patents.”

Dickinson reminded everyone that the idea for post grant review came from the idea of opposition, and the idea for IPRs was to move inter partes reexamination to the Board, but that isn’t what happened when the rules were written.

Toward the end of the panel Kappos gave several rather bleak assessments.

“I don’t think things are really getting much better,” Kappos said. “We are in what I refer to as the leaky life raft.” When you are stranded and a leaky life raft comes along it looks great, but it doesn’t change the fact that it is still a leaky life raft. “The best you can say about 101 is that it has stabilized in a terrible space.”

Then in discussing the 2017 U.S. Chamber report on Global IP, a report where the U.S. is now ranked 10th in the world in terms of patents, Kappos gave the perfect summary: “We need to admit that we have a solidly mediocre patent system… we are in bad shape in relation to our patent system.”

Judge Michel, referring to the conclusions of a recent Time magazine article, closed the panel by saying that the world is not prepared for the next pandemic. He explained that America is in danger because we have strangled our innovation system. Let’s hope our leaders in Congress and in the White House comprehend what all three branches of government have done to so heavily burden innovators and the U.S. innovation system before it is too late.