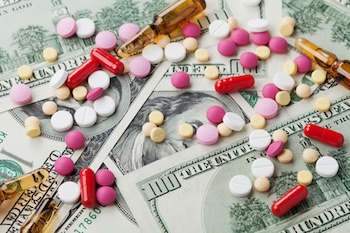 According to Lex Machina data scientist Brian Howard, litigation filed in response to ANDA filings with the FDA follows very different dynamics than other patent litigation. “The filing of these cases is not permissive in the same way that a typical case in district court is,” Howard said. “There’s a strict period in which action has to be brought or the rights are lost.” Federal regulatory code governing FDA market approval for generic drug ANDAs mandates that a pharmaceutical patent owner must bring suit within 45 days of the ANDA filing or the FDA can approve the generic for sale on the market. This fundamental difference in the reason why such cases are filed is one major reason why Lex Machina has broken out ANDA litigation into a report separate from its regular intellectual property litigation updates. 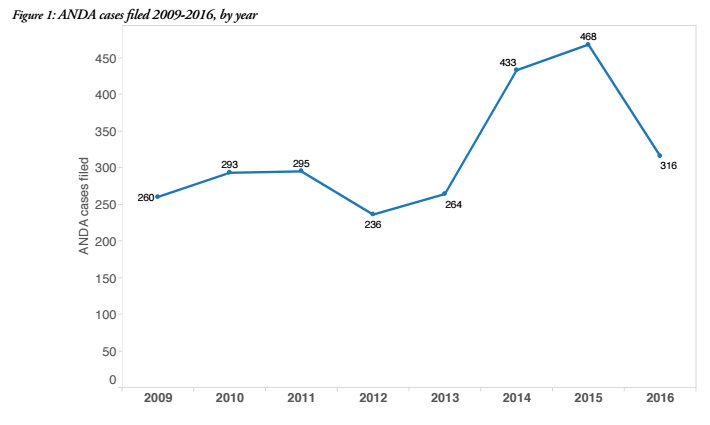 Despite the fact that ANDA-related patent litigation saw its first decline since 2012, data going back to 2009 indicates that ANDA litigation is still relatively strong. The 316 ANDA cases filed in 2016 is still higher than any other year in the survey up until 2014, when ANDA cases spiked up to 433 cases. In 2015, ANDA cases increased again up to 468 cases filed. 2016’s totals can be seen more as a return to a normal baseline established between 2009 and 2013; annual ANDA case filings during this period ranged from a low of 236 cases up to a high of 295 cases. With only 81 ANDA cases filed during the first quarter of 2017, this year is also on pace to see filing totals which fit within this baseline. Overall, ANDA litigation in recent years has accounted for about 10 percent of all patent infringement litigation filed since the beginning of 2009 and the sector exhibits much less volatility quarter-by-quarter when compared to the rest of the U.S. patent litigation environment. 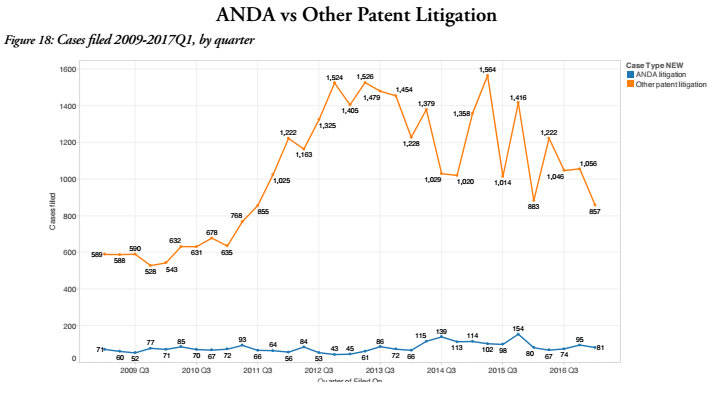 Although other Lex Machina reports have pointed out the effects that high-volume plaintiffs have on volatility in overall patent infringement litigation, no such designation is made in the company’s ANDA report. Again, this has to do with the non-permissive nature of ANDA litigation and the dynamics behind why generic drugmakers file ANDAs in the first place. “ANDA litigation, in some sense, has a clumpiness to it,” Howard said. “When a drug is likely to go off-market, typically more than one generic maker will want to make a generic.” Lex Machina has also scraped data from the FDA’s Orange Book in order to create word clouds which indicate the pharmaceuticals which have spawned the most ANDA case filings. The antipsychotic drug Abilify has been at the center of 63 ANDA cases since 2009, the single-largest amount of case filings over generic versions of a branded drug, just slightly ahead of the pain relief drug Oxycontin (59 cases since 2009). 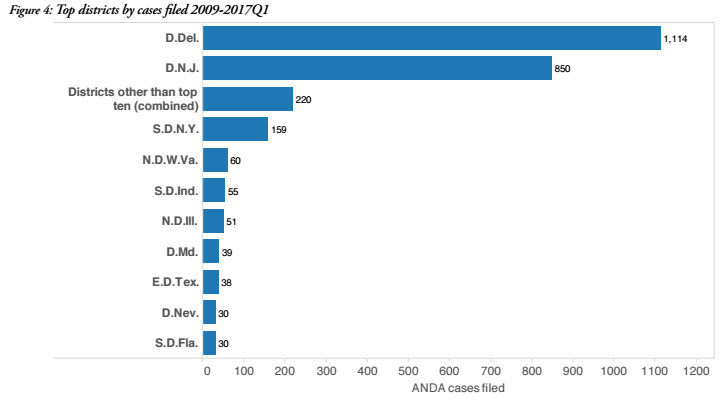 Venue trends in ANDA litigation are also markedly different than what is exhibited in overall patent litigation. ANDA case filings since 2009 have been highly concentrated in two venues: the District of Delaware (D. Del., 1,114 ANDA cases) and the District of New Jersey (D.N.J., 850 cases). While the Eastern District of Texas (E.D. Tex.) holds one-third of the country’s docket in overall patent litigation, that district has only seen 38 ANDA cases filed since the beginning of 2009. The activity of repeat players in the ANDA space underpins this venue concentration which is unique to ANDA case filings, Howard said. “These are complicated drug cases and I’m not sure that either side wants to wind up with these in Texas,” he said. 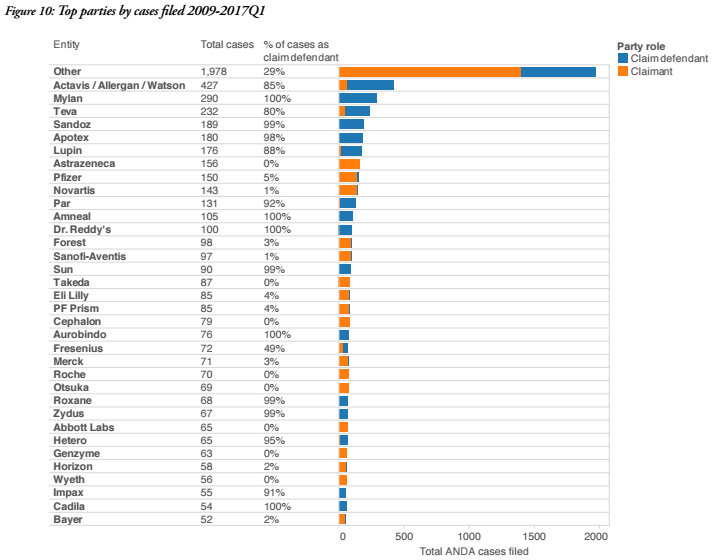 As Lex Machina’s ANDA report points out, the top parties in ANDA litigation tend to primarily be either claimants or claim defendants; there aren’t many companies who play both sides of the fence in this space. The top party in ANDA litigation is Irish-American pharmaceutical giant Allergan (NYSE:AGN), a corporation which includes Actavis and Watson as subsidiaries. Since 2009, those entities have been seen in 427 ANDA cases and have shown up as a claim defendant in 85 percent of cases. Second-place Mylan (NASDAQ:MYL) of Canonsburg, PA, has been involved in 290 ANDA cases since 2009 and has been a claim defendant in each case. The party with the largest number of ANDA case filings who has served primarily as a claimant is UK-based drugmaker AstraZeneca (NYSE:AZN), which has been a claimant in 100 percent of the 156 ANDA cases it has been a party to since 2009. Howard notes that this dichotomy in which pharmaceutical companies are either claimants or claim defendants bears out across the board, except where there have been corporate mergers or acquisitions. 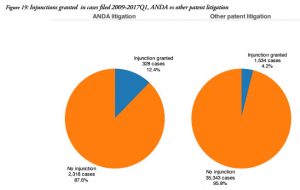 Going back to the year 2000, only six ANDA cases have resulted in the award of any damages according to the Lex Machina report. As Howard explained, ANDA litigation is geared more towards obtaining injunction than the recoup of any royalties. Since the beginning of 2009, 12.4 percent of ANDA cases resulted in the granting of an injunction, a much higher percentage than the 4.2 percent of overall patent litigation during that period resulting in an injunction. Although damages are low, 56.5 percent of ANDA cases reach a likely settlement and it’s in those settlements where pay for delay schemes may possibly be taking place where pharmaceutical patent owners pay a generic drugmaker to delay the date that they release their drug to the market. Compared to overall patent litigation, ANDA cases see higher rates of claimant wins, claim defendant wins and procedural results. 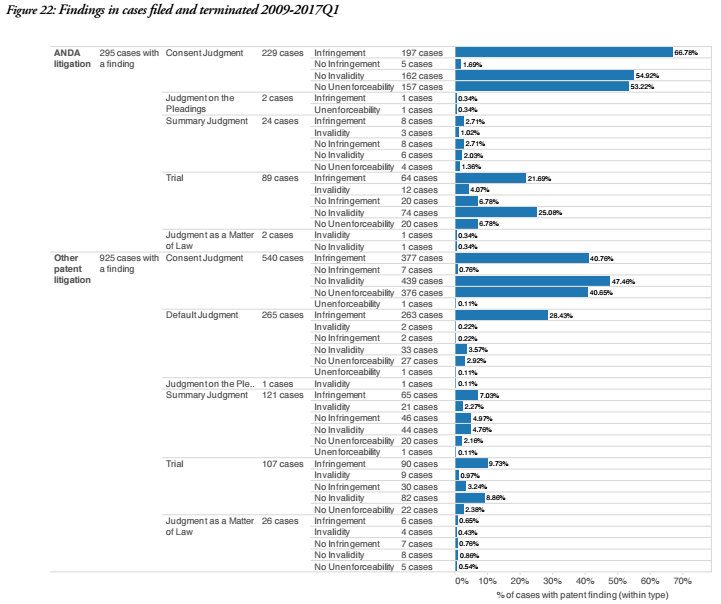 The bases for findings of patent invalidity are also different when comparing ANDA cases to all other patent infringement litigation. Nearly 70 percent of the ANDA cases which find patent invalidity do so on Section 103 grounds for obviousness. By contrast, slightly more than 55 percent of patent invalidity findings in other patent litigation reach invalidity on Section 102 grounds for anticipation/novelty. “So much of ANDA litigation is focused on patents covering not just the ingredients but what effect the pharmaceutical has,” Howard said. Given that there’s a larger proportion of patents focused on the effects, it seemingly could be the case that obviousness arguments are easier to make if pointing out that the patent covers the reformulation of a drug which already existed. Despite the fact that ANDA parties tend to play either the claimant or the claim defendant role, Howard indicated that it didn’t seem like either side was interested in broad invalidity doctrines. “Even the companies mainly litigating as generics may have aspirations branded drugs someday as well,” he said. 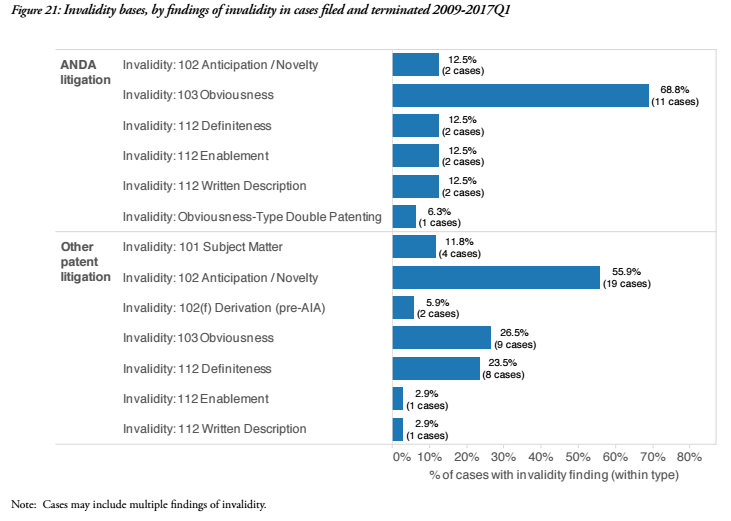