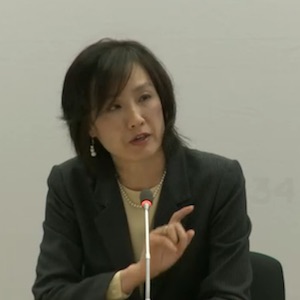 Earlier this morning Under Secretary of Commerce for Intellectual Property and Director of the United States Patent and Trademark Office Director Michelle Lee gave introductory remarks to the quarterly meeting of the Patent Public Advisory Committee meeting at the United States Patent and Trademark Office. In prepared remarks Director Lee said the Office must significantly raise Patent Trial and Appeal Board (PTAB) fees in order for the PTAB to be self-sustaining on a going forward basis. On one hand the fact that Director Lee acknowledged that the PTAB is not self-funding is significant, but her comments dramatically under played what seems to be really happening at the PTAB. The reality appears to be that patent owners and patent applicants are subsidizing the PTAB.

Speaking about the fee increases the Office is seeking, Director Lee characterized them as modest with one exception: increases to PTAB trial fees. Quickly reading prepared remarks, Lee explained:

Although it is not final, I can tell you the proposed fee increases are relatively modest… There is one exception to the modest fee increase, and that is in the area of PTAB fees. We believe there should be full cost recover for all costs associated with PTAB trials as they were intended under the AIA. We have done a good job over the past several years ensuring that our fees generally covered costs, but we do need to raise the PTAB trial fees to ensure that these trials are self-funding on a going forward basis.

Saying that the Office has “generally covered costs” is obviously an admission that the PTAB has not always operated on a cost-neutral basis. But that does not seem to be true if you take a closer look at the numbers.

Before looking at the numbers, there is an obvious disconnect between what Lee actuall said and the Office asking for substantial PTAB fee increases. If the Office has charged fees high enough to generally cover costs, what is the justification for a substantial fee increase? Thus, what she said this morning does not actually support the decision to significantly raise PTAB trial fees. However, it has been known for sometime that the PTAB was operating in financially troubled waters. Therefore, the characterization that the Office has been generally able to generally cover PTAB costs with fees is, at best, a stretch. At worse it isn’t true.

In the FY 2016 Annual Report the USPTO explained that fee increased would be required so the Office could recover the aggregate costs of PTAB operations. The report said (at page 48):

On October 3, 2016, the USPTO issued a notice of proposed rulemaking (NPRM) to set or increase certain patent fees, as authorized by the AIA. The proposed fees will allow the USPTO to recover the aggregate estimated cost of Patent and Patent Trial and Appeal Board (PTAB) operations and USPTO administrative services that support Patent operations.

However, the notice of proposed rulemaking published in the Federal Register by the USPTO on October 3, 2016 seems to tell an entirely different story, but one that the reader has to put together for themselves. Not only has the Office not been covering the costs of PTAB trial operations, but the significant fee increases will still not cover the costs of PTAB trial operations. Even if the significantly increased fees were to go into effect those fees will still be below FY 2015 costs. See Table 11, which is included in the notice of proposed rulemaking but not explained by the Office.

Looking at Table 11 you will notice the proposed fee for an inter partes review (IPR) challenging up to 20 claims filed by a large entity would raise $5,000 to a total of $14,000, but according to the Office the FY 2015 costs associated with that line item were $22,165, which means for every such request the Office was running a deficit of $13,165. Even with the substantial fee increase the Office would still run a deficit of $8,165.

IPR filings have been extremely high, with 1,7137 petitions filed in FY 2015 and 1,565 petitions filed in FY 2016, making it easy to understand the significant financial woes of the PTAB. It seems the PTAB has been operating at a substantial deficit for some time and even with significant fee increases the Office continues to plan to run PTAB trials at a deficit, which means patent owners and patent applicants will be subsidizing the PTAB and infringers challenging patents moving forward. To call this outrageous is an understatement.

In order to operate the PTAB the Office has been required to divert funds from other Office operations to fund ongoing operations of the PTAB. In simple terms that means patent owners and those applying for patents have been subsidizing and will continue to subsidize the PTAB and the infringers who seek to destroy their patents in front of the PTAB death squad.

If the PTAB is in such dire financial straights why in the world is the Office refunding petition fees? The notice of proposed rulemaking published in October 2016 continues to promise that the Office will “refund the post-institution fee if the IPR proceeding is not instituted by the PTAB.” Why?

Patent owners are getting completely screwed. PTAB statistics are ridiculous (see here, here, and here for example). Petitioners are allowed to file challenge after challenge after challenge against the same patent and patent owners. If challenges are not instituted they get a refund, and the patent owner continues to get legal bills and harassed. Then on the fifth petition when the Office institutes the PTAB claims that the institution rate over those five challenges is only 20%. NO! The institution rate was 100%. The patent was eventually instituted after the patent owner was harassed, the petitioner had money refunded all along the way, and patent owners and applicants subsidized the challenge because the Office doesn’t charge enough to kill that patent that they issued, the statute presumes is valid, but the Office refuses to stand behind.

It is hard to believe a tribunal like the PTAB is actually operating in the United States of America. Truly astonishing!