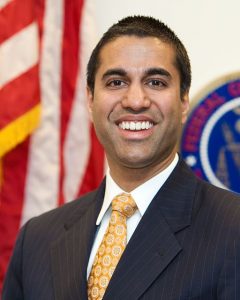 On Wednesday, April 26th, Federal Communications Commission Chairman Ajit Pai gave an address titled The Future of Internet Freedom at the Newseum in Washington, D.C. Although the speech has inspired no small amount of ire and vulgarity from the tech press, Chairman Pai offers a reasonable argument on both why the FCC’s net neutrality policies have harmed Internet competition and how arguments in favor of FCC’s Title II regulations on Internet service providers have little basis in fact.

“The Internet is the greatest free-market success story in history,” Pai’s prepared remarks read. Pai credited much of this success to the “light-touch framework” for Internet regulation put in place by former President Bill Clinton who, working with a predominantly Republican Congress, enacted the Telecommunications Act of 1996, a bill which modernized American telecommunication law 62 years after passage of the Communications Act of 1934. The framework established in 1996 “enabled the Internet to grow and evolve beyond almost anyone’s expectations.”

Yet all of this changed in February 2015 when the FCC, operating under the direction of former Chairman Tom Wheeler, issued its Open Internet Order to create a new framework of rules for the regulation of Internet service providers (ISPs). The new rules, which included the reclassification of ISPs as common carriers under Title II of the Telecommunications Act, were ostensibly to preserve the openness of the Internet. Pai, on the other hand, saw the move as entirely political. He noted in his remarks that the Obama White House directive on Title II regulations, posted on YouTube, came days after a disappointing 2014 midterm election and was designed to energize a dispirited base. “This was a transparent attempt to compromise the agency’s independence,” Pai’s remarks read. “And it worked.” Pai further stated that the “digital dystopia of fast lanes and slow lanes” didn’t actually exist, calling those concerns “hypothetical harms and hysterical prophecies of doom” which caused the federal government to abandon successful policies.

In Pai’s view, the effects of Title II common carrier regulation on ISPs has been disastrous for investment into infrastructure and innovation. Between 2014 and 2016, Pai said that the country’s 12 largest ISPs have decreased their spending by $3.6 billion, a drop of 5.6 percent in investment. Pai also cited a letter sent to the FCC from a collection of 22 ISPs, each serving about 1,000 customers or fewer, who argue that the Title II common carrier regulations have affected their ability to obtain financing and have at least slowed the development and deployment of new infrastructure and services.

Pai’s remarks at the Newseum also outlined the steps he plans on taking in order to return the nation’s telecommunications regulatory environment to its state prior to the 2015 Open Internet Order. The commissioners of the FCC will convene a meeting on May 18th to vote on a notice of proposed rulemaking with a period of public input on the proposed rules to follow the FCC vote. According to Pai, the notice of proposed rulemaking will cover the return of broadband service classification from Title II common carrier to Title I information services, returning regulatory authority to the Federal Trade Commission (FTC); eliminating the Internet conduct standard,  a vague statute of which Pai said he’d “never heard a better definition of regulatory uncertainty”; and efforts to engage the public regarding comments on bright-line rules adopted by the FCC in 2015. Pai stated that he would publicly release the text of the notice of proposed rulemaking the following day, in contrast to the 313-page Title II order from 2015 which was only released to the public after it was adopted by the FCC.

Pai believes that the return to a light-touch framework would benefit Americans in a variety of ways. The lighter regulatory framework should spur broadband deployment towards better Internet service, create jobs for Americans to deploy those networks, boost marketplace competition, end government micromanagement and secure Internet privacy by returning authority to the FTC.

Many industry groups have bristled in the face of Pai’s remarks. A statement from Sir Tim Berners-Lee, the inventor of the World Wide Web, indicated his belief that the rollback would help “concentrated market players” more easily pick winners and losers online. And yet, it’s those concentrated market players like Google, Netflix (NASDAQ:NFLX) and Facebook (NASDAQ:FB) who have lobbied the FCC to keep the Title II common carrier regime intact. As we’ve reported in the past, these Internet companies lobbying to keep Title II regulations intact typically have larger subscriber bases and higher market capitalizations than the ISPs which face heavier regulations under the Open Internet Order.