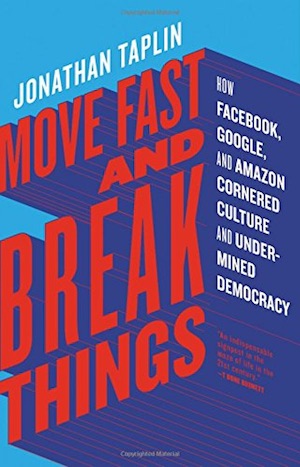 Eight years later, Zuckerberg’s Facebook mantra has taken on an altogether different meaning. In a new book, Hollywood producer (Mean Streets, The Last Waltz) and former USC Annenberg Innovation Lab director, Jonathan Taplin, offers a dark vision of technology giants without restraints, trampling on the rights of creatives, consumers and innovators, alike, and propping up their company’s shares, and founders’ wealth, at the expense of investing in the future.

Move Fast and Break Things, subtitled How Facebook, Google and Amazon Cornered Culture and Undermined Democracy, dissects the inordinate power of a handful of the popular, primarily Internet companies and those who run them, and its impact on culture, innovation and personal freedom.

What Taplin does best is to connect the dots, distinguishing between true break-through ideas and the ability to simply profit from data and dominate markets by making content and information more widely accessible. His analysis reveals how a combination of bold vision, oversized ego and enormous wealth have resulted in undermining the rights of a wide range of people and businesses, and pillaging whole industries.

Taplin draws connections between the decidedly undemocratic ideals of the Koch brothers, whose father was a founding member of the John Birch Society, and PayPal-founder and Facebook-funder Peter Thiel, which he says are both in the “extraction business” – one oil and the other data – one leaves a carbon footprint, and the other a subtler but no less destructive privacy imprint.

“The co-founder of YouTube, Chad Hurley, was a PayPal alumnus, schooled in Peter Thiel’s philosophy,” writes Taplin. “He built his company on the same ‘don’t ask permission’ ethic the Larry Page had embraced… ‘Who will stop me?’ [A phrase which can be found in Ayn Rand’s libertarian novel, The Fountainhead.] This became the center tenet of Internet disrupters, from Thiel’s PayPal right up to Travis Kalanick’s Uber.”

Taplin writes that Facebook has 77% market share in social media; Amazon a 70% share of e-book sales; and Google, which from 2000 to 2015 championed the tag line for its corporate code of conduct, “Do no evil,” controls 88% of online searches and search advertising. He does not consider Apple a monopoly because its main hardware business has many competitors and, through iTunes, it pays recording artists a relatively reasonable royalty.

“The tech elites jealous guarding of its own monopoly platforms,” says Taplin, “is built upon a blatant disregard for the artist’s intellectual property.”

“More people than ever are listening to music, reading books, and watching movies, but the revenue flowing to the creators of that content is decreasing while the revenue flowing to the big four platforms is increasing. Each of these platforms presents a different challenge for creators. Google and YouTube are ad-supported ‘free-riders’ driven by a permission-less philosophy.” [Permission-less free-riding, or “efficient infringement,” has also come to dominate invention rights, where simple patent licenses are more contentious than ever.]

“Facebook, with its libertarian financier’s roots, takes much the same stance toward content and advertising, but there are signs that its CEO has real ethical questions about where the company is going. Amazon, whose founder, Jeff Bezos, embraces the libertarian creed but has not taken the ‘don’t ask permission’ route, has instead opened a new front: a relentless push to lower prices and commoditize content (especially books), which presents a different danger.”

How do we prevent Internet monopolies – which may be highly effective at providing a necessary service – from violating the rights of individuals, businesses and IP holders and slowing disruptive innovation needed for break-throughs? You have the government regulate them like utilities. While this is not something that Internet founders and their shareholders want to hear, it may be inevitable. Europe is more apt to regulate BigTech, and enforce net-neutrality, than the U.S. – and it is not mere jealousy.

If several Internet high-flyers are monopolies, asks Taplin, a former tour manager for Bob Dylan, and one or more of them need to enter in a consent decree similar to the one that Bell Labs agreed to with the U.S. government in 1956, what would that model work?

“If Google were required to license every patent it owns for a nominal fee to any American company that asks, it would have to license its search algorithms, Android patents, self-driving car patents, smart-thermostat patents, advertising-exchange patents, Google Maps patents, Google Now patents, virtual reality patents, and thousands of others.

“What is clear from the Bell Labs model is that such a solution actually benefits innovation in general. The availability of Bell Labs patents allowed the rise of Texas Instruments, Fairchild Semiconductor and Intel. The cellular patents allowed Motorola to grow exponentially — only to bought by Google for its patents. Bell Labs’ satellite patents created a whole new industry with many players.”

This sounds like simple arithmetic, but Taplin is wrong to assume that the quality of Google inventions and patents will have significant impact. The company may be a leader in many areas of the Internet, but it when it comes to R&D and patent quality, it is no Bell Labs. Forcing Google to share its IP will not necessarily prevent it from continuing to dominate in search or enable other businesses to compete. It may, however, humble the company sufficiently to allow others to grow.

Easy Ride is Over

Taplin is acutely aware of Internet companies’ influence in Washington, especially the Obama administration, where Apple, is the company with the highest market value and Alphabet (Google’s parent) – the third biggest corporate lobbyist – is number two. “There have been fifty-three revolving door moves between Google and the White House,” he writes.

Those moves involved 22 White House officials who left the administration to work for Google and 31 Google executives (or executives from Google’s main outside firms) who joined the White House or were appointed to advisory boards.” Other government moves involved national security, the Department of Defense, the State Department, Federal Communication Commission and other agencies and departments, not the least significant of which is the United States Patent and Trademark Office.

The Guardian, the British daily, said “Move Fast and Break Things is a timely and useful book because it provides an antidote to the self-serving narrative energetically cultivated by the digital monopolies. They have had an easy ride for too long and democracies will, sooner or later, have to rein them in.

“The first step down that road is to stop viewing them through rose-tinted spectacles and see them for what they really are: enormously powerful corporations that move fast and break things, while minimising their tax bills and shirking the responsibilities that come with their [media] power.”

It would be difficult for many people and businesses to live without Amazon, Google, YouTube and Facebook, but it is becoming virtually impossible for those who produce intellectual property to live with them.

For those who believe in the importance of ideas and innovation to the U.S. as a nation, Jonathan Taplin’s new book is an eye-opening portrait of the adversaries in the war over control of new ideas and big data, and what it will take to win.

For more information or to buy Move Fast and Break Things, go here.

To read a free sample (via Google), go here.