On April 12th, legal data analytics firm Lex Machina released a litigation update report for the first quarter of 2017 which highlights trends in intellectual property suits being filed in U.S. district courts. One of the key findings is that only 938 patent infringement actions were filed in district courts during the recent quarter, a total which is the lowest for a single quarter since the third quarter of 2011 when only 921 such cases were filed.

Although that data point sounds significant, Lex Machina data scientist Brian Howard notes that this results fits well within a pattern in patent litigation which has played out in recent years. “Generally, when people see the words ‘new low in litigation level,’ they assume that litigation fell off of a cliff,” Howard said. “That’s not the case here.” The most recent quarter almost saw as many cases filed as the first quarter of 2016, when 963 patent infringement cases were filed in U.S. district courts. Howard also noted that, in recent years, the first quarter of the calendar year typically sees a drop in the number of cases filed from the total number filed in the fourth quarter of the previous year. 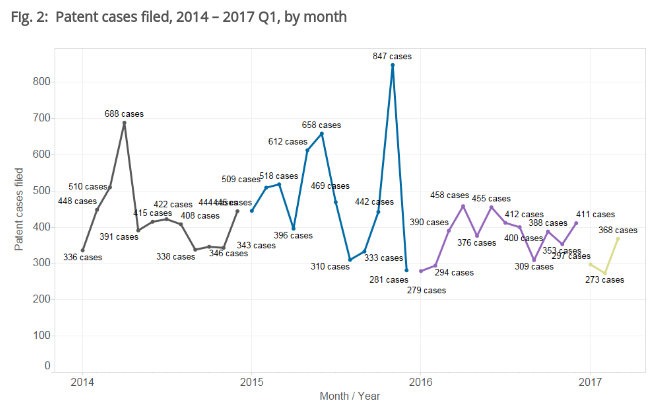 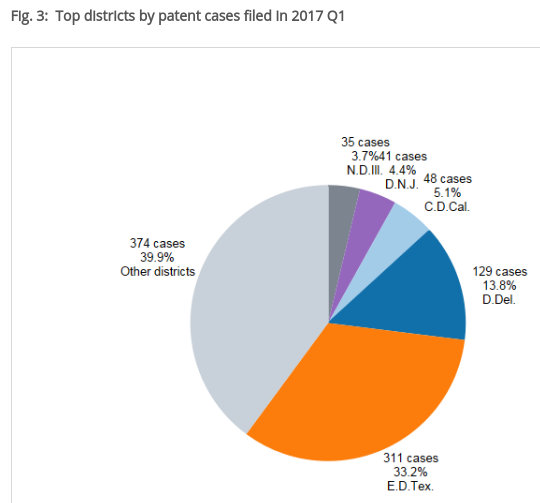 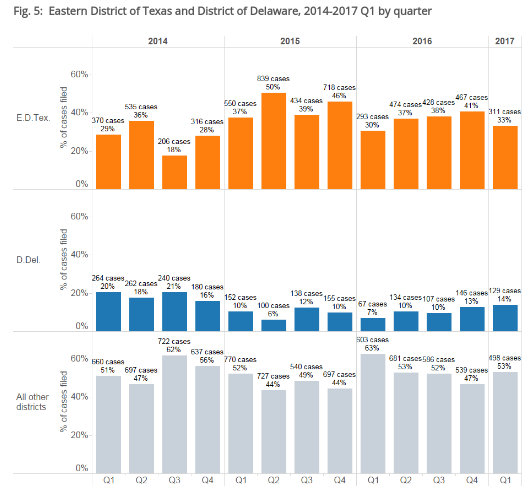 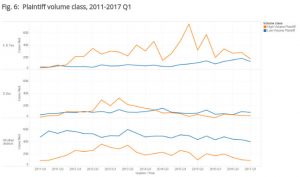 Past litigation reports from Lex Machina have pointed to the fact that volatility in patent case filings are typically triggered by changes to the patent system, or even just proposed changes. Spikes in patent litigation have closely preceded changes like the abrogation of Form 18 to plead patent infringement in district court as well as the enactment of provisions of the America Invents Act. Given the fact that the debate on patent reform isn’t currently reverberating in Congress the way it has in recent years, it’s possible that the recent downturn in high-volume plaintiff filings is due to calmer waters in the patent system. The next foreseeable change to the U.S. patent system stem from the U.S. Supreme Court’s upcoming decision in TC Heartland v. Kraft Foods Group Brands, so it will be interesting to see if the court’s ruling in that case creates any similar volatility in case filings. 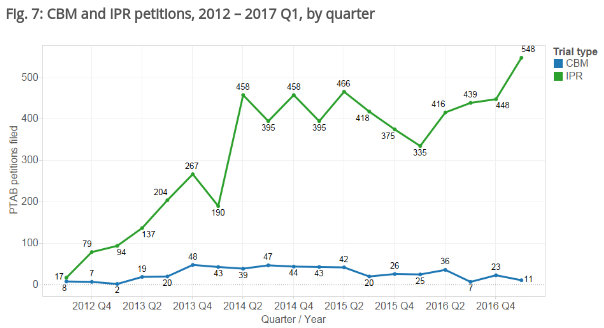 Over at the Patent Trial and Appeal Board (PTAB), the first quarter of 2017 saw a breakout in the number of petitions filed for inter partes review (IPR) proceedings, up to a total of 548 such petitions filed through the first three months of the year. Between the second quarter of 2014 and the fourth quarter of last year, IPR filings had generally remained within a range from 375 petitions up to about 460 petitions, with the first quarter of 2016 resulting in a low of 335 IPR petitions. As Howard notes, the recent quarter represents a significant bump in PTAB activity. The two companies who have had the most IPRs filed against them in the recent quarter are Japanese corporation Goda Kaisha IP Bridge 1 and Santa Clara, CA-based digital entertainment advertising platform developer Rovi Guides, Inc.

As is typically the case in recent years, trademark litigation levels continued on a very slow decline in the most recent quarter. A total of 732 trademark cases were filed in 2017’s first quarter, a drop from the 859 cases filed in last year’s fourth quarter. The only significant spike in recent years came in the third quarter of 2014 when a total of 1,431 trademark infringement cases were filed, 461 of which were related to a string of cases filed by former National Football League players against the league for the usage of their likenesses. 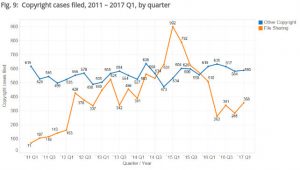 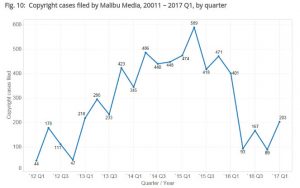 Much of this copyright litigation is driven by Malibu Media LLC, a plaintiff listed in 203 file sharing cases filed during the first quarter. As Howard noted, that makes Malibu Media responsible for more than one quarter of the total 948 copyright cases filed in U.S. district court during the first quarter. In 2016’s fourth quarter, Malibu Media only filed 89 file sharing suits, contributing about 10 percent of a total of 869 copyright infringement actions filed during that quarter. Past Lex Machina copyright litigation reports have indicated that Malibu Media has a settlement rate of about 90 percent on its file sharing cases with a majority of its damages being awarded on default judgments. “Malibu Media’s behavior resembles the behavior of somebody looking for a nuisance value suit,” Howard said.