Litigation and IPRs: More Dangerous Than You Thought?

Litigations and inter partes reviews are always a risk when dealing with patents. That’s why it’s so important to always have a strategy in place to combat such risks. Of all packages sold, 10.2% have at least one US patent litigated after the listing date. We have a much better data set this year and the rates are much higher than previously reported. We strongly recommend revising any models based on the old data.

Table 9 suggests that purchased patents are used in either litigations or perhaps private assertions (not all inter partes reviews have corresponding litigations) with much greater frequency than previously found. When analyzed on a per-US patent basis, about 1.2% of US patents presented are litigated. 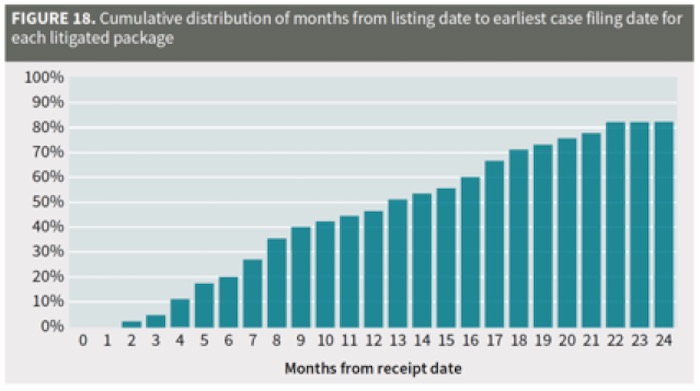 When developing a strategy for addressing the risk of litigation from packages listed on the brokered patent market, it is important to look at which packages get litigated. Figure 19 examines the proportion of litigations that came from sold and unsold packages. All of the packages in this dataset have at least one US-issued asset which was litigated after the listing date, while 56% of all litigations after a listing are from sold patents. This highlights the importance of a robust risk clearance function for the in-house team. A combination of cross-licenses, license on transfer agreements and membership of defensive aggregators can reduce these litigation risks. Similarly, the remaining 44% of litigations came from assets that never changed hands – the original owner could not sell the patents and sued. This suggests that monitoring the brokered patent marketplace and defensive purchasing can be valuable as well.

CLICK HERE to CONTINUE READING… In Part 6 of our 2016 Patent Market Report, we’ll look at the current market size and conclude with our key findings and action items for the year.