Taking stock of the health of the American patent system, a system in crisis 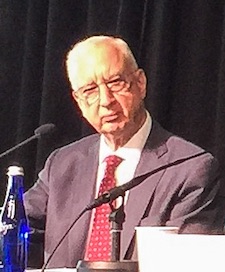 Is the United States reducing the possibility of future innovations by weakening patent rights for short-term gains? That was the question presented during the opening video at LeadershIP 2017, a patent and antitrust policy conference held at the Newseum in Washington, DC, earlier today.

The event opened with a keynote address from Judge Paul Michel, retired Chief Judge of the United States Court of Appeals for the Federal Circuit.

“In our time together today we are going to try and take stock of the health of the American patent system,” Michel began. “It is important to remember that the patent system was founded in the Constitution… and although the world ‘right’ appears many times in the Bill of Rights, in the original Constitution the only ‘right’ mentioned is the patent right.”

Michel identified three separate waves of change that have rocked the patent system over the past several years. First is the creation of post issuance review of patents, ushered in by the America Invents Act (AIA). The second is the quartet of patent eligibility decisions from the United States Supreme Court (i.e., Bilski, Mayo, Myriad and Alice). The third and final wave of change relates to actions being taken by regulatory and competition authorities around the world and in the United States.

Judge Michel would go on to explain that the primary purpose of the American patent system is to increase innovation through incentivizing investment. Investors are concerned with three things, Michel explained: “What are the odds of any return of investment, what is the scale of return, what is the time to money.” Investment is being disincentivized by uncertainty created by the aforementioned three waves of changes to the system. We should be looking at the impact on the flow of money, Michel explained.

Indeed, these changes have done nothing other than create significant disincentive to investors who provide capital – the very lifeblood of innovation. Uncertainty is driving down funding sources, and particularly hard hit are biotechnology firms, Michel explained. Furthermore, based on publicly available sources of information, economists estimate that “patent values have dropped by as much as 60% in the last five years,” Michel said.

Judge Michel did not limit his criticism of changes in the law to changes occurring over the last several years. Pointing to the fact that patent infringement trials are faster, cheaper, and surer overseas, Judge Michel explained that in some countries injunctions are routinely granted. For example, in Germany injunctions are virtually certain, “which causes settlements after a trial,” Michel explained.

In the United States the Patent Trial and Appeal Board, which was created by the AIA, was supposed to lead to faster, cheaper, more efficient administration of validity disputes. Instead, the PTAB has become almost omnipotent, with the Federal Circuit routinely deferring to the agency tribunal, which has become a precursor to patent litigation and thereby extending rather than shortening the timeline of disputes. “The Patent Trial and Appeal Board has become even more important than the district courts because it has become a weigh station,” Michel explained. “It has become a prelude to district court litigation.”

Judge Michel also took aim at the dual standard for interpreting claims used by the USPTO. According to Michel, patent claims have but one meaning – the Philips meaning. Michel went on to explain that he doesn’t understand how a claim can be invalidated under any other standard.

I have to agree. Not using the Philips standard simply means the Patent Office refuses to provide a presumption of validity and is again looking at the claims as if they are doing so in the first instance where the claims are not entitled to any statutory presumption. The problem, of course, is the patents have been issued, 35 U.S.C. 282 requires a presumption of validity for issued patents, the administrative trial process is not an examination, there is no right to amend claims at the PTAB, and patent owners are not entitled to few procedural rights that would even remotely approximate adequate due process. So, patent owners must spend many tens of thousands of dollars (if not more) and spend up to a decade (if not longer) to obtain patents that then are afforded no statutory presumption of validity. How this can make sense to anyone is beyond me.

In any event, Judge Michel wrapped up his keynote presentation saying: “In our society things have to get pretty bad before they get better because politicians lag…” Michel said. “But I think they are beginning to catch on.” Michel went on to explain that industry involvement and engagement will be required in order to see positive pro-patent reforms become a reality.

Judge Michel is, of course, correct that industry engagement and involvement is necessary in order to turn the tide. Now is not the time to give up hope, although for a variety of reasons it would be easy to do just that. I also believe he is correct when he says that our political leaders, or at least some, are starting to catch on to the damage that has been done in recent years to the U.S. patent system. There are national security issues, significant economic issues, and the future of innovation dominance. These issues in the late 1970s and 1980s lead to political forces swing in a pro-patent direction. Perhaps the same will happen at this moment in history.