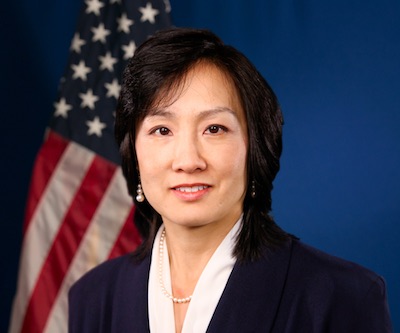 The Patent Public Advisory Committee (PPAC) of the United States Patent and Trademark Office (USPTO) is holding a public meeting today on the main campus of the USPTO in Alexandria, Virginia. PPAC reviews the policies, goals, performance, budget, and user fees of the patent operations, and advise the Director on these matters.  PPAC has nine voting members who are appointed by, and serve at the pleasure of, the Secretary of Commerce. Each member serves a three-year term.

While Michelle Lee does not appear on the meeting agenda, she was in attendance this morning at the public PPAC meeting and delivered opening remarks. According to the PPAC agenda opening remarks were to be delivered by Drew Hirshfeld, Commissioner for Patents.

Despite repeated refusals by the USPTO and Department of Commerce to answer the simple question about whether Michelle Lee even remained employed by the USPTO, the answer this morning appeared to be an unequivocal yes, although it was interesting, even peculiar, to note that Lee was not introduced as Director of the USPTO when she spoke briefly at PPAC.

The fact that Lee appeared at an official, public USPTO event is newsworthy, but the continued refusal to refer to her as Under Secretary of Commerce for Intellectual Property and Director of the United States Patent and Trademark Office remained bizarre.

It would seem that all doubt has now been removed as to the status of Michelle Lee. Even though there has been no public announcement from the USPTO, the Department of Commerce, or the White House, Lee has finally been publicly introduced at an industry event as Director of the United States Patent and Trademark Office. Indeed, earlier today Lee delivered a keynote address at the luncheon of the PTAB Bar Association meeting taking place at the Ritz-Carlton in Washington, D.C. This seems noteworthy for several reasons. First, up until today Lee had been canceling speaking engagements and having other senior USPTO Officials stand in for her. Second, Wilbur Ross was finally confirmed as Secretary of Commerce on Monday, February 27, 2017, which could indicate that some more official announcement will soon follow.

As we wait for an official announcement there will be many questions that still beg to be answered. Why would there be such reluctance six weeks after President Trump’s inauguration to identify who is running the USPTO, and to say whether Lee remains Director? Given how other worldly bizarre this episode became, when easy, legitimate questions are repeatedly ignored, rebuffed and left unanswered it should hardly be surprising that a deeper dive for answers ensues. In fact, when those who are in possession of what should clearly be publicly available factual information refuse to cooperate that means the search for answers must weave together whatever factual fragments can be obtained to try figure out a plausible underlying narrative. It is unfortunate that it wound up that way, but the only thing that is clear from this episode is the Executive Branch was hiding something — the only question is what were they hiding?

In a city that never seems to learn from history, the coverup is always worse than the scandal. That is not to say there was a scandal here, and if there was no scandal I suppose it is impossible for there to be a coverup technically, but it sure had that feeling. If there isn’t something to hide what exactly explains the recalcitrance of the government to answer such a simple question about Lee’s status for so long and to abusively delay responding to a Freedom of Information Act (FOIA) request? Now that Lee has been introduced at an industry event and spoken having been introduced as Director it will be interesting to see if the USPTO is further uncooperative under FOIA.

At some point very serious questions will need to be answered. There was obviously some reason why Lee’s status was not being confirmed, why at the public PPAC meeting this morning Lee was not referred to or introduced as Director, why the Department of Commerce leadership webpage still lists the position of USPTO Director as “Vacant” as of Thursday, March 2, 2017, at 1:08pm ET (see screenshot), and why Lee had been canceling speaking engagements. All the while Lee’s name continued to appear on issued patents, Lee signed at least one Federal Register Notice as “Director”, which occurred on February 6, 2017, and her LinkedIn profile continually listed her title as Under Secretary and Director of the USPTO.

To read all of our coverage of this topic please see USPTO Director Chronicles.

UPDATED Thursday, March 2, 2017 at 1:11pm ET to add mention that Lee has now been introduced as Director of the USPTO at an industry event.