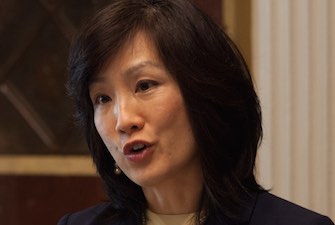 On January 26, 2017, attorney Gary Shuster filed a Freedom of Information Act (FOIA) request (FOIA Request No. F-17-00099) with the United States Patent and Trademark Office (USPTO). The request was rather simple. Generally speaking, Shuster was looking for information on the status of Michelle Lee. More specifically, Shuster wanted information on who might be Director or Acting Director of the USPTO.

As you might guess, the USPTO continues to refuse to answer any questions — or FOIA requests — about Michelle Lee or whoever is currently running the Office.

Shuster’s request was rather straight forward and requested:

The Shuster FOIA request also went on to give the USPTO an easy out: “In the alternative, you may satisfy this request by simply answering the following question: Who is the current director or acting director of the USPTO?”

A response was due under the Freedom of Information Act on February 24, 2017. By letter dated February 24, 2017, sent via e-mail to Mr. Shuster, the USPTO invoked a ten working day extension in accordance with 37 C.F.R. 102.6(c)(1) and (2)(iii). The new deadline is now extended to March 10, 2017. According to these regulations cited by the USPTO, an extension is warranted in “unusual circumstances” where there is a “need for consultation… with another Federal agency having a substantial interest in the determination of the request.”

On its face it would seem that invoking of 37 C.F.R. 102.6(c)(1) and (2)(iii) is an egregious abuse of authority and obvious violation of the Freedom of Information Act. Request for information about who is running the agency cannot under any reasonable definition create an “unusual circumstance,” and there seems to be no justifiable or defensible reason why another Federal agency would, could or should have an interest in Mr. Shuster, or the public, being properly informed about who is running the USPTO.

The only way claims of “unusual circumstances” would not be an egregious abuse and obvious violation of the Freedom of Information Act would be if those in the Office of the General Counsel, specifically those charged with responding to FOIA requests, do not know who is Director or if there is an Acting Director. As unbelievable as it seems, there is a very good chance that is exactly the case. There are many within the USPTO that assume Michelle Lee is still the Director, and there are many within the USPTO that assume that Michelle Lee is no longer the Director. The one common denominator seems to be that no one really knows.

The USPTO refusing to timely respond to a FOIA request and invoking a ten day extension due to some unidentified “unusual circumstance” is extraordinarily peculiar, although no I suppose no more peculiar than the entirety of the Office’s efforts to guard the name of the person running the agency as if it is a state secret designated for certain eyes only. So, for now, the story continues unresolved.