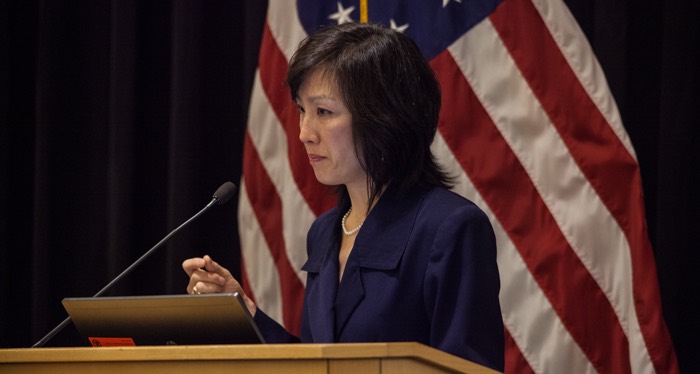 In what is turning out to be a never-ending chase for information on the status of Michelle Lee, I decided to try a new tactic. After getting nowhere with the United States Patent and Trademark Office (USPTO) for the past four weeks, I decided to go around the USPTO and try and obtain a comment straight from the Department of Commerce. I called the Commerce Department Public Affairs telephone number, identified myself, and asked if they could tell me who is currently the Director of the USPTO. I was placed on hold for about a minute and when the person on the other end returned I was told that he could not comment.

The search for an answer to what should be a very simple question continues.

By all outward appearances, Michelle Lee seems to still be Director of the United States Patent and Trademark Office. She is reportedly still showing up for work, and her signature remains on issued patents, which is relevant because by law (35 U.S.C. 153) the signature of the Director must appear on issued patents. Lee also signed the Federal Register Notice titled Changes in Requirements for Affidavits or Declarations of Use, Continued Use, or Excusable Nonuse in Trademark Cases, which is dated February 6, 2017, and which published on February 10, 2017.

Still, the mystery remains because the USPTO and now the Commerce Department refuse to say who is the Director or Acting Director and whether Michelle Lee has been held over by the Trump Administration. Furthermore, since Inauguration Day on January 20, 2017, the Department of Commerce leadership webpage has consistently listed the position of Under Secretary of Commerce for Intellectual Property and Director of the United States Patent and Trademark Office as “Vacant.”

If Michelle Lee remains Director of the USPTO why won’t the USPTO or the Commerce Department simply answer this straight-forward, legitimate question?

The only person willing to speak on the record about what is happening at the USPTO is Congressman Darrell Issa (R-CA). On Thursday, January 19, 2017, Issa spoke at a breakfast fundraiser and announced that Lee would be held over by the Trump Administration. Earlier this week he told Politico that Lee is, in fact, the Director of the USPTO, but hinted that she may not be for long since her talents could easily be used to fill other Trump Administration openings.

In all our attempts to get information or comment, we are either told “I don’t know,” or “No comment.” So it seems fair to say that a great many people are being held in the dark, while those who are in the know are simply refusing to comment. Meanwhile, it appears as if Michelle Lee is going about her daily business as Director of the USPTO.

Presumably at some time we will be told who is the Director of the United States Patent and Trademark Office, but until then that information is being protected as if it is a State secret. Information on who is running the USPTO seems to be on a need to know basis and I guess the public just doesn’t need to know. And I thought the USPTO couldn’t become any less transparent than under President Obama’s second term. I was clearly wrong.

Although Democrats have refused to cooperate and instead will use every procedural tool to drag out a final vote, confirmation for Wilbur Ross as the next Secretary of Commerce is expected on Monday, February 27, 2017. Perhaps after that we will be able to get some clarity on who has been (and will be) running the Patent Office.