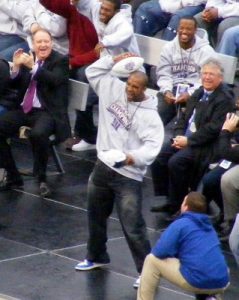 “David Tyree Re-enacts The Catch” by Ted Kerwin. Licensed under CC BY 2.0.

On February 3rd, 2008, the NFC Champion New York Giants toppled the AFC Champion New England Patriots by a score of 17 to 14 in Super Bowl XLII, a game which is considered by many people to be both one of the NFL’s best Super Bowls ever as well as one of the greatest upsets in sports history. The game featured a game-winning drive in the fourth quarter which included perhaps the game’s most memorable play, a 32 yard passing play on 3rd-and-5 from Giants QB Eli Manning to WR David Tyree, who caught the ball by securing it against his helmet using one hand. The game ruined New England’s bid that year to become the first team since the 1972 Miami Dolphins to win all of its games in the regular season and the playoffs.

On December 6th, 2016, the USPTO registered U.S. Trademark Registration No. 5095619, which protects the use of the standard character mark “PERFECT SEASON” in commerce. The Kraft Group has registered this mark in five classes to cover goods and services including pencils, playing cards, T-shirts, knit shirts, sports DVDs and providing sports and entertainment information via a global computer network.

One week later on December 13th, the USPTO registered U.S. Trademark Registration No. 5100521, which protects the use of the standard character mark “19-0” in commerce. This mark is registered in five classes and cover many of the same goods and services, except for pencils. Unlike the ‘619 mark, this trademark is registered to be used for the sale of calendars.

Of course, a party filing a trademark registration has to prove the use of that mark in commerce and although the Patriots have achieved some milestones over the past two decades, they’ve never actually gone 19-0 or have finished with a perfect season. Perhaps the “PERFECT SEASON” trademark could be interpreted to cover their perfect regular season, but it is at least a little curious how or why the Patriots would have used 19-0 in commerce when 18-1 is their best record. And trademarks only exist so long as they remain in use, so to keep the 19-0 registration the Patriots will have to use it in commerce or risk it going abandoned. So it will be interesting to see how the Patriots continue to use 19-0, or if they continue to use 19-0.

In any event, coverage of the trademark registration published by ESPN, however, indicates that the Kraft Group has apparently licensed the “PERFECT SEASON” mark to a Massachusetts high school football organization for the production of a sports DVD featuring an undefeated team. So while Robert Kraft cannot actually enjoy the ownership of a perfect season, he has at least licensed the name to other teams which actually accomplish that feat.