Water Balloons, Weapons of Mass Destruction and the PTAB 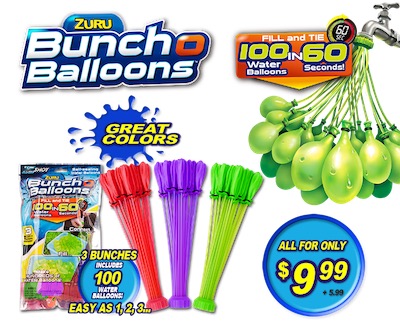 Josh Malone has eight kids. On a hot Texas days, he and his kids enjoy a water balloon fight to cool things off. Josh is normally in the rear with the gear. He is the family reloader, filling and tying water balloons to supply his kids with the ammunition necessary to keep the back yard action going. It was during one of these skirmishes that Josh figured he could replace himself if he just created a weapon of mass destruction. He thought of several ways of doing it and then, like so many inventors before him, he obsessively tinkered until he finally invented one that worked. It screws on a garden hose and has dozens of long tubes. Attached to the end of each tube is a self-sealing balloon. You just turn on the hose and when the balloons are substantially filled, you shake them, they fall off and the kids launch another attack. Leonardo da Vinci would be proud.

He named it a Bunch O Balloons. Josh knew then that he had a winner and building a company based on his own invention became his American Dream. He filed a provisional patent application on February 2014. Things went quickly at the U.S. Patent and Trademark Office (USPTO) and his first patent was issued about 18 months after the provisional application was filed.

Patenting proved Josh was the inventor and that he had an exclusive right to his invention. But more importantly, the patent could be collateralized to attract investment to build his startup.

Investors look at upside potential and downside risks. On the upside a patent’s exclusive right meant that if Bunch O Balloons took off, Josh would be able to keep competition at bay long enough to establish his startup and return the investment. On the downside, a large company with deep pockets, existing customers and solid distribution capabilities could steal the invention and massively commercialize it thus flooding the market and killing Josh’s startup. But patents mitigated this risk. In the worst case, Josh’s investors could take control of the patent and return their investment by defending it against the same infringers who killed the company.

Josh manufactured an initial batch of products and then ran a crowd funding campaign on Kickstarter. This campaign was a hit, generating 598 orders on day one and bringing in nearly a million dollars overall. Within a couple of days it triggered national media coverage in Sports Illustrated, Time, Good Morning America, and the Today Show. Bunch O Balloons went viral with 9.6 million YouTube views. I can only imagine how Josh must have felt… this would mean everything to his growing family.

Over the next few months, orders kept pouring in. He was contacted by several ethical manufactures seeking to license his invention. With business picking up fast, Josh partnered with a company called ZURU, who is now marketing, manufacturing and selling Bunch O Balloons. Josh achieved the American Dream. But that means nothing under the current American patent system.

Kickstarter is regularly watched by potential investors, customers and ethical businesses. But there are others. Infringers also monitor Kickstarter for potential new products and as it turns out, the better a product does on Kickstarter, the more likely it will get knocked off. Bunch O Balloons got knocked off by TeleBrands just a few months after Josh launched his Kickstarter campaign. (Kickstarter has lobbied for the Innovation Act, which would have done even more damage to inventors).

Today, the U.S. patent system favors infringers like TeleBrands. In fact, it is a CEO’s fiduciary duty to steal patented technologies, massively commercialize them and then never talk to the inventor unless they sue. In the vast majority of cases inventors cannot access the courts because contingent fee attorneys and investors have largely left the business, so in most cases the infringer gets to keep the invention free of charge.

Much has been written about how Congress in the America Invents Act of 2011 stacked the deck against inventors by creating the Patent Trial and Appeal Board (PTAB) in the USPTO. The PTAB turned property rights upside down by immediately invalidating the property right already granted by the USPTO and then forcing the inventor to reprove the validity of the same property right. Under the leadership of Michelle Lee, the deck was stacked even further by setting PTAB evaluation standards much lower than the court. Michelle Lee’s decision to set these low standards weaponized the PTAB for the mass destruction of patents. And a weapon of mass destruction they certainly are. The vast majority of patents evaluated in the PTAB are either invalidated or neutered. Big infringing corporations know this.

During the pendency of the appeal, the PTAB rendered its verdict – Josh’s patent was invalidated as indefinite under Section 112. The claims state that the balloon must be “substantially filled”, which according to the PTAB is not defined: “… the Specification does not supply an objective standard for measuring the scope of the term ‘filled’ or ‘substantially filled.'”

But how else can you write the claims? You could use grams of water if a balloon was a solid structure, or perhaps if all balloons were exactly the same. But manufacturing processes that make balloons are not accurate processes. The thickness of the balloon’s wall varies greatly from balloon to balloon and even in the same balloon. Yet Michelle Lee’s PTAB invalidated the patent that Michelle Lee’s USPTO had just issued. (Five other patents have been issued to Josh, one even refers to this very PTAB proceeding as prior art, yet it was still granted by the examiner. I kid you not.)

The Federal Circuit, while deciding a preliminary injunction was properly granted, addressed the PTAB decision in its oral arguments and in its decision. In oral arguments Judge Moore stated, “You have to be able to say substantially, ‘cause there’s a million patents that use the word substantially.” And in their written decision the Federal Circuit explained: “We find it difficult to believe that a person with an associate’s degree in a science or engineering discipline who had read the specification and relevant prosecution history would be unable to determine with reasonable certainty when a water balloon is “substantially filled.” Indeed. I suspect that all eight of Josh’s kids can do that too.

Josh’s case is not over. Already he’s spent multiples of what he earned in his Kickstarter campaign and probably everything he’s made in this entire American Dream. Yet, he’s got years left of litigation and millions more to spend.

Patents can be invalidated in multiple ways by different branches of government and under different standards. Often these branches and standards disagree with each other, as is the case here. Today nobody can know if a patent is valid until the Federal Circuit or the Supreme Court says it is.

But this is the world inventors live in. If you invent something marketable, you will pay for it with years in court and millions of dollars. Nobody respects patent rights. They don’t have to. It is better to steal them and litigate the inventor into oblivion. Josh is fortunate to have a partner willing to fight with him and accept considerable financial burden. But most inventors cannot even open the courthouse doors.