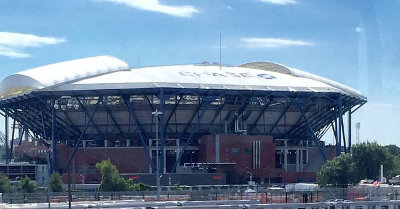 On Wednesday, January 11th, retractable roof system developer Uni-Systems LLC of Minneapolis, MN, filed a patent infringement suit against multiple defendants, including the United States Tennis Association (USTA). The lawsuit alleges that multiple defendants conspired to infringe upon Uni-Systems’ patents and trade secrets by planning to build a retractable roof over a USTA tennis stadium in New York. The patent infringement suit has been filed in the U.S. District Court for the Eastern District of New York (E.D.N.Y.).

Uni-Systems is asserting two of its patents in this infringement suit. Those patents are:

According to the official complaint filed in E.D.N.Y. by Uni-Systems, the allegations of patent infringement go back to 2003, when it was engaged by Indianapolis, IN-based construction firm Hunt Construction Group, Inc., to develop and install a retractable roof for the University of Phoenix Stadium, the home of the National Football League’s Arizona Cardinals. According to a Uni-Systems web page describing the project, the company had to solve engineering challenges related to extreme hot and cold temperatures seen in Arizona and the decision to use twin translucent roof panels in the construction.

In the complaint, Uni-Systems claims that it learned of the infringement in 2011 when it discovered plans to install a retractable roof system at Arthur Ashe Stadium, home of the US Open tennis tournament in Flushing, New York. According to allegations made by Uni-Systems, Hardesty & Hanover won the engineering bid for the work with plans to have Hunt Construction handle the building of the roof. Uni-Systems notified these and other defendants of its claims of patent infringement and trade secret misappropriation in May 2016 and filed the suit in E.D.N.Y. when requests to resolve the dispute were ignored.

Uni-Systems notes in its complaint that the firm has been developing, designing and fabricating kinetic architecture for nearly 50 years, since its founding in 1968. It has developed retractable roof systems for many well-known stadiums including Marlins Ballpark in Miami, FL; Lucas Oil Stadium in Indianapolis, IN; and Minute Maid Ballpark and Reliant Stadium, both of Houston, TX. The earliest issue date of either patent asserted by Uni-Systems in this case was in September 2004.

In addition to the claims for patent infringement, Uni-Systems also identifies the misappropriation of trade secrets in this case. This includes operational software which Uni-Systems prohibits customers from sharing with others as part of the confidentiality agreement to which the company’s customers must agree. Uni-Systems’ proprietary software operates a retractable roof’s bogies, or the vehicles responsible for opening and closing a retractable roof. Other trade secrets protected by Uni-Systems through its confidentiality agreements include material selection, machining and assembly procedures. Maintaining trade secrets for many years has allowed Uni-Systems to market itself as a professional service provider for complex building construction outside of the many standardized divisions of construction, developing its own specifications for retractable roof systems.

Multiple aspects of the retractable roof design at Arthur Ashe Stadium are identified in the suit as allegedly infringing claims of the patents asserted in the suit by Uni-Systems. These construction elements include a major truss spanning a distance between first and second supports, the truss including a convex upper portion and a tensioned lower portion which are elements covered by claim 1 of the Retention Mechanism patent. Uni-Systems also identifies elements covered by claim 1 of the Lateral Release patent, including bogies and an equalizer assembly which enables the lateral movement of retractable roof panels. 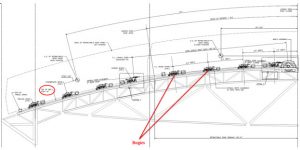 Although the lawsuit focuses mainly on the retractable roof system construction at Arthur Ashe Stadium, it is not the only instance of infringement and misappropriation identified by Uni-Systems in its lawsuit. The firm identified a bid made by Hunt Construction last June for another retractable roof construction project, this time for the Louis Armstrong Stadium, also in Flushing, NY, and another U.S. Open venue for USTA. An article published last August by Sports Illustrated outlines renovation plans to the entire USTA National Tennis Center designed by Rossetti Inc., another one of the defendants named in Uni-Systems suit, including retractable roofs at both the Arthur Ashe and Louis Armstrong stadiums.