What Do Cloud Robotics Mean for Driverless Cars? 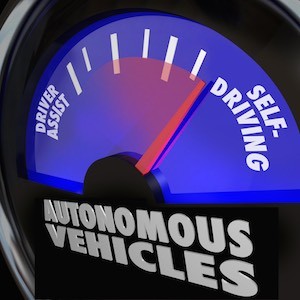 When you think of autonomous cars or driverless vehicles, you probably don’t associate them with cloud computing and data analytics. However, that’s exactly the technology that makes autonomy possible, at least when it comes to modern mechanics.

You see, a driverless vehicle needs to be able to make a decision in a split second. In order to make that decision, it needs to scan and analyze everything in its local environment. While it is certainly possible to create a computer — housed inside the vehicle — that can do all these complex calculations, store all the necessary data and handle the analytics side of it, that’s not what you would call efficient.

Instead, these vehicles tap into a remote cloud computing network to access boatloads of stored data. This data includes roadmaps, instructions and strategies, visual indicators or identifiers and much more.

They do make calculations on their own, and of course, there is computer equipment embedded inside the vehicle. It’s the data, though, that these systems tap into that makes the whole thing truly possible – data stored primarily in the cloud.

What if the entire system was streamed from the cloud? What if remote machines handled the processing and fed everything back to the vehicle? How would this change the technology?

Security Is a Major Concern

It doesn’t matter whether a vehicle is controlled via a local system or a cloud-based system, security is an important aspect for both scenarios. A vehicle that has to wait for commands from a cloud system is especially vulnerable, though.

Can you imagine the havoc one could wreak by gaining control of these systems? Vehicles could be shut down in the middle of a busy highway, careened into oncoming traffic or even made to run down pedestrians. This is an absolute worst-case scenario – a real nightmare – and nothing even remotely close has ever happened like this. That doesn’t mean it can’t.

In July 2015, a pair of hackers were able to crash a Jeep after gaining access to the vehicle’s software through a vulnerability in the entertainment system.

In fact, even traditional vehicles that are simply connected can be hacked in many ways. This can all be done through technology like Wi-Fi, Bluetooth, GPS and more.

Liability Gets Even More Confusing

Not everything about the technology is a boon. Cloud computing – especially with a system that is handling the processing and work remotely – can open up a bunch of new questions, namely when it comes to liability.

Things are already confusing with autonomous vehicles as it is, but once you add the cloud computing aspects, it gets more convoluted. Lawmakers are already trying to iron out the specifics, and only a handful of states have regulations in place for driverless vehicles.

Nearly every auto manufacturer from Audi to GM is working on self-driving technology, and yet there are few-to-no laws in place to guide or set precedent. Most laws assume a human being is controlling the vehicle. This caveat is also why Google and Tesla’s engineers must keep their hands near the wheel and their eyes on the road when traveling in these vehicles.

But it’s not just the laws. Look at the roadways you use to commute. They were specifically designed for human vision and control, not that of computers. Our transportation infrastructure needs to be updated to accommodate this new technology.

All these factors make the concept of liability extremely confusing. If an autonomous vehicle makes a choice to avoid a collision with pedestrians but will result in injury to the driver, can the driver take action against the manufacturer? If it’s the state of the road that is to blame, who is at fault? There are no easy answers and no longer a single source to point the finger at.

A 2009 D.C. Metro train crash due to an automatic control system failure resulted in a whole slew of claims and lawsuits: 84 out-of-court claims worth a total of $1.6 million. But the fault was never explicitly stated. The company operating the trains took responsibility, but was it really something they did — or the software engineers who came up with the technology?

The best way to solve this is to not only put regulations in place for using autonomous vehicles, but also for when something happens. It sounds a little crazy, but rules of blame should be defined beforehand — before we’re in that dire situation where everyone is demanding results and emotions are running high.

Consumers, businesses and emergency officials should know exactly who is at fault in the event of an accident. Computers cannot lie — although maybe someday they could if we keep inching towards artificial intelligence. But until then, computers do not suffer from temptation to lie or deceit. You can pull the necessary data, assess it and make an informed decision.

But before we can do that, we need regulations in place that tell everyone who is truly at fault.

Are Driverless Cars Safer With Cloud Robotics Onboard?

Despite the concerns, driverless vehicles have an incredible potential to clean up our roadways, especially if the processing is handled via cloud systems. The president of the Insurance Information Institute (III) estimates that there will be 80 percent fewer accidents from autonomous cars.

Ultimately, once the legal gaps and ethics behind driverless vehicles are defined, these vehicles will be safer than current vehicles. This is because a computer can make a much smarter, more informed decision and it can do so much faster than a human can. This is only possible through cloud computing and data analytics technology, however.

Every time a driverless vehicle encounters a scenario or event, the data is recorded and stored for later. Imagine a human that has instant access to hundreds of Terabytes of data. You’d have the knowledge, skill and experience to make pretty much any informed decision. That’s the unfettered and advanced access autonomous vehicles will have — at least if they are tapping into a cloud system.

They won’t hesitate or choose poorly when faced with a split decision. Instead, they’ll make the necessary adjustments and an accident or avoidance will play out exactly as it should. It’s a matter of deciding when a vehicle should save lives or sacrifice them — as morbid as that sounds.

These semantics need to understood before these vehicles enter our roadways. But when they do, nearly 90 percent of accidents — that are a result of human error — will no longer occur. Those are some good odds.

Megan Ray Nichols is the editor of Schooled By Science, a blog dedicated to making advances technological and scientific understandable. She encourages others to engage in the sciences. If you’d like to join [...see more]