Is Michelle Lee Refusing to Leave the USPTO? 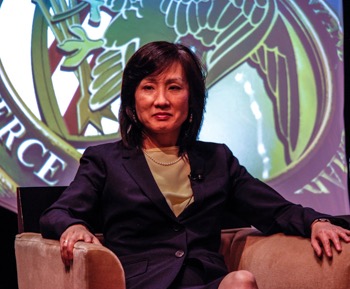 Those who believe Friday, January 20, 2017 will be the last day for USPTO Director Michelle Lee may need to rethink things and start to consider the possibility that she will be the Director for the foreseeable future.

Earlier today Professor Dennis Crouch wrote on PatentlyO that the political appointees at the USPTO would all resign sometime before noon on Inauguration Day, January 20, 2017. In any other transition year that would be exactly what would happen, but this is not your average transition and there may be quite a bit of drama unfolding behind closed doors at the Patent Office.

Chief Communications Officer Patrick Ross has already resigned, sending out an e-mail to colleagues and associates, letting them know that Thursday, January 19, 2017 will be his last day. So too has Chief of Staff Vikrum Aiyer. This is what typically happens at the end of a President’s term. Political appointees are asked for their resignation, and the resignations are generally accepted. In some situations, the incoming, newly elected President will keep certain officials on for a period of time until replacements are put in place. But the Trump Transition Team has notified politically appointed U.S. Ambassadors (in contrast to career foreign service officials serving in global hot spots) that they will not be allowed to stay at their posts. If President Trump will not allow U.S. Ambassadors to stay on, which is a courtesy frequently extended, the thinking goes that it does not bode well for any other Obama appointee.

Or so we thought.

Early today I learned from a credible source that Lee was either refusing to resign or perhaps attempting to revoke her letter of resignation. Shortly thereafter I was told that senior Obama officials were upset with what was happening at the Patent Office and that Lee had “gone rogue.” I reached out to the Patent Office for comment, suggesting I was happy to accept even a denial of this rather bizarre and difficult to believe story. The Patent Office has not made anyone available to confirm, deny, rebut or refute this version of events.

Throughout the day I attempted to find additional information that would confirm, deny, rebut or refute that Lee was affirmatively refusing to resign as Director. Then late today, after the close of business, a group that is allegedly made up of USPTO employees sent an anonymous e-mail from a Gmail address to me and a group of other Washington insiders. The e-mail explains grievances with Director Lee and why this particular group of anonymous USPTO employees does not believe she should be allowed to stay on as Director. What caught my attention, however, was the preface to the list of grievances, which stated: “According to internal documents circulating at the USPTO, Michelle Lee is being asked and vetted to stay on during the Trump Administration.”

What are these internal documents? Efforts transitioned to seek additional confirmation of the initial information and to attempt to identify what those “internal documents” may have said, if in fact they do exist.

A second credible source confirmed for me that Michelle Lee was attempting to stay on as Director. This confirmation came from an independent channel of information separate from the initial lead given to me earlier in the day. I was told that PTO Officials were refusing to confirm or deny any rumors relative to Lee, both on and off the record.

Meanwhile, I’ve learned that the examining corps has been sent a memo from Lee indicating that she is planning on leaving, but that she would stay if asked to stay. This is consistent with what she told Politico in November, and what she has been known to tell others in Washington, DC. But if that is all that is happening it is hard to understand why the Patent Office was unavailable for a comment of any kind, and even harder to understand why USPTO career officials have been refusing to confirm or deny any rumors relative to Lee one way or another.

Complicating matters, earlier today Commerce Secretary Nominee Wilbur Ross explained during his Senate confirmation hearing that he met Lee yesterday to discuss her handling of issues relating to her former employer Google. Ross explained that he intends to continue using Lee’s ethics policy with regard to Trump, who has pending trademark matters before the Office. In light of the day’s events some are starting to speculate that this meeting between Ross and Lee was more than just an exit interview, and may in fact be a job interview.

The situation is fluid. What we know is that Michelle Lee does not want to step down as Director of the Patent and Trademark Office. She has repeatedly let it be known that she is interested in staying. Whether she refused to resign or revoked her resignation remains unproven at this hour, but the unusually tight-lipped nature of Patent Office and senior Officials raises suspicions. If she has refused to resign or has revoked her letter of resignation and she is not being vetted by the Trump Administration it would seem we are headed for an awkward and potentially embarrassing showdown.

As one source put it, “we will know on Friday. She will either be there or she won’t.” But for those who have written Michelle Lee off altogether, the news of her demise may be greatly exaggerated.