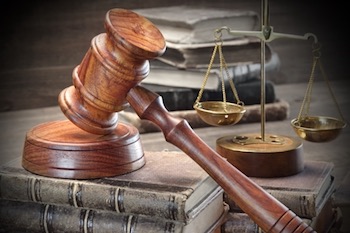 On January 12th, legal analytics company Lex Machina released a litigation report on activities at U.S. district courts during the fourth quarter of 2016. The report provides a thorough recap of the amount of cases filed alleging infringement of patents, trademark and copyright over the past few months.

In the patent world, it appears that the current litigation atmosphere is much less volatile than it has been in recent years. The fourth quarter of 2016 saw a total of 1,140 patent infringement cases filed in U.S. district courts, a small rise from the 1,126 patent lawsuits filed in the third quarter of the year. For the year, however, patent infringement cases dropped by 22 percent from the previous year, from 5,823 cases in 2015 down to 4,520 cases in 2016. 2016 actually saw the lowest number of patent infringement lawsuits filed since 2011, when 3,578 cases were filed. There was no month during 2016 where more than 460 patent suits were filed; both 2014 and 2015 had at least one month where more than 650 patent suits were filed in district court. 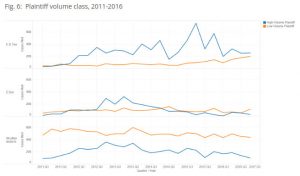 Another conclusion that Howard draws from his research into patent litigation levels in recent years is that spikes in patent litigation numbers tend to be driven by high-volume plaintiffs in response to changes to the U.S. patent system. For example, the most patent infringement lawsuits filed during one month over the past three years were the 847 lawsuits filed during November 2015. It’s possible that this rush of filing lawsuits corresponds to the abolition of Form 18 used to plead patent infringement in district court. Often, these high-volume plaintiffs are highly responsive even to proposed changes that might affect litigation outcomes. A spike of 688 patent infringement suits in April 2014 was likely caused by the release of an informally proposed amendment known as the Schumer Cornyn Compromise; 190 lawsuits were filed just on April 23, the day before a cutoff date in the amendment for a retroactive application of fee shifting provisions. “Given the spikes over time, the carefulness in choosing districts and their response to procedural developments, high-volume plaintiffs are a sophisticated set,” Howard said. “Everyone else is very predictable. High-volume plaintiffs are incredibly unpredictable, include relatively few actors and sensitive in a way that is hard to predict.” Lex Machina is actually releasing a new tool to its subscribers which will allow them to separate high-volume plaintiffs from low-volume plaintiffs into different data sets in an upcoming release. 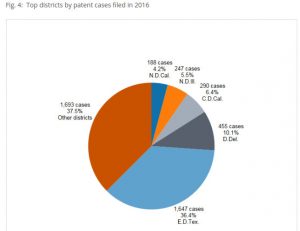 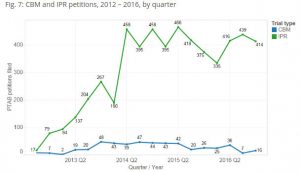 Over at the Patent Trial and Appeal Board (PTAB), 2016’s fourth quarter was business as usual to the likely chagrin of patent owners. The number of inter partes review (IPR) petitions filed dropped from 439 IPR petitions in the third quarter down to 414 IPR petitions during the fourth quarter. However, that’s within the range of about 400 IPRs up to 460 IPRs filed in nine of the last eleven quarters. “2016’s first quarter was the third straight quarter of decline and there was some thought that IPRs were done after having flushed out the system,” Howard said. 2016’s second quarter saw an increase up to 416 IPR petitions and that trend seems to continue. There were a comparatively miniscule 16 covered business method (CBM) review petitions filed during 2016’s fourth quarter, an increase from 7 CBM petitions filed during the third quarter. Those are the lowest quarters for CBM petition filings since 2013’s first quarter. 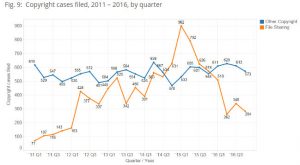 Trademark infringement cases dropped slightly from 857 lawsuits in 2016’s third quarter down to 841 suits during the fourth quarter, and that sector of IP litigation remains very steady. Copyright litigation was down, especially in one interesting sector of that litigation world: file sharing cases. These cases involve John Doe or anonymous defendants charged with copyright infringement through the use of file sharing technologies like BitTorrent. Only 284 file sharing cases were filed during the fourth quarter of 2016, a far cry from the spike of 902 file sharing cases filed during 2015’s first quarter. A lot of this decline has been the result of a dip in litigation filed by Malibu Media, an adult film production company. Other judicial developments, such as federal indictments against former partners at Prenda Law charged with running an extortion scheme based on porn copyright lawsuits, could have what Howard called a “chilling effect” on such case filings.